Under the searing hot Arizona sun, The Monster Energy Off-Road Team was back in action this past weekend at Speedworld Off-Road Park in Surprise, AZ for rounds 11 and 12 of the Lucas Oil Off-Road Series.  With record highs hitting 106 degrees and only four races left in the series, race fans knew the racing was going to get red-hot!  The ultra technical track featuring the notorious “Moguls” section is known for forcing the drama by keeping the passing lanes tight causing drivers to take big risks for the pass. 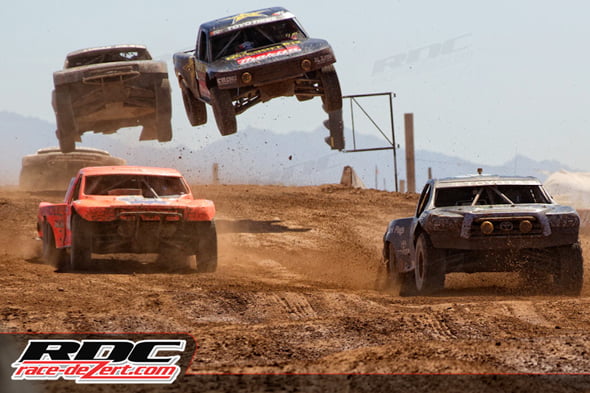 After opening ceremonies, racing kicked off with the Pro-4’s.  Qualifying 8th on Friday, Rick Huseman came right off the start and grabbed an early third position.  After battling with Adrian Cenni, Huseman was able to pass on the inside in turn three and maintain that position until the mandatory caution.  A few laps into the second half of the race, a noticeable gap began to form between the front-runners of Kyle Leduc, Rick Huseman, and Carl Renezeder.  In an attempt to catch and pass Kyle, Huseman roared through the moguls and came into turn four with some extra speed, Huseman went wide and lost control, spinning his truck.  Renezeder passed and Huseman was still able to hold on to a podium 3rd place finish.

Sunday was disappointing day for Huseman.  After moving up a position to second early on, things were looking great for back-to-back podiums.  However, in lap four he broke his rear driveshaft, causing him to limp behind the field for the remainder of the race. 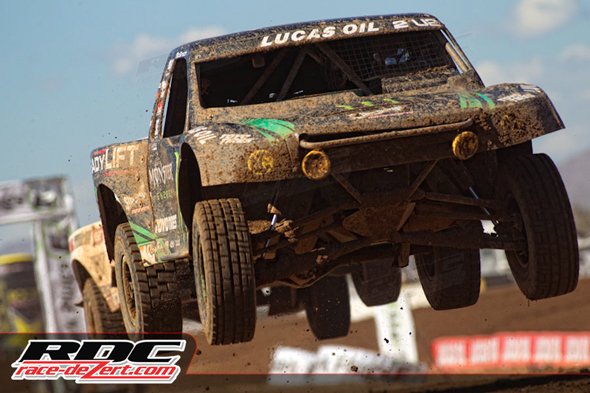 After qualifying 6th on Friday, Jeremy McGrath knew just what he had to do if he wanted to be on the podium at the end of the race.  McGrath moved his way to 4th by the mandatory caution, with Carl Renezeder and Robby Woods falling behind with some mechanical issues. McGrath took advantage of the race traffic melee and did what he does best, pass.  With Brian Deegan and Rob MacCachren starting to extend their lead, the battle for third place was intensifying between McGrath, Ampudia, and Adler.  McGrath saw an opening after Ampudia checked up and flew past him with a couple of laps left.  McGrath was able to hold on to the position to finish in third place.

The Sunday Pro-2 race was perhaps the most exciting of the weekend.  After landing wide off a jump going in to turn four, Robbie Pierce smashed in to Myan Spaccarelli as he tried to gain control of his truck.  Both trucks were severely damaged.  Jeremy was caught in the mess, which caused damage to his truck.  On the restart, McGrath climbed back up to 5th but later gave up his position after he was forced to the hot pits during a yellow flag for a fresh tire.  McGrath still managed to finished the race in 9th position. 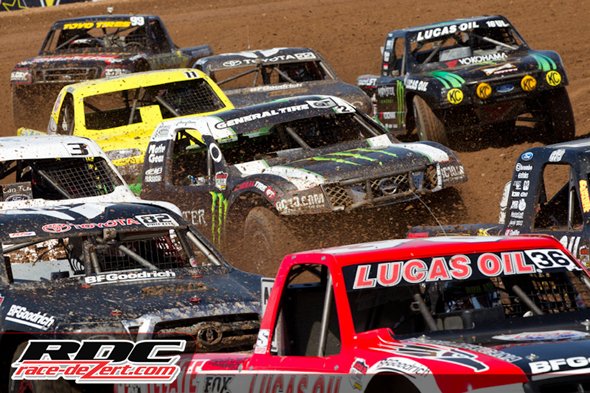 Casey Currie and Cameron Steele had solid Friday performances in the Pro-Lite class.  Qualifying 11th, Cameron fought all the way from the back of the pack to a 4th place spot.  With only eight trucks left out of the initial eleven, Cam’s engine blew on the final lap, leaving him with the 8th place finish.  Currie filled Cameron’s 4th place spot after a continuous fight to maintain his 5th place qualifying position all race.

Cameron looked to redeem himself on Sunday, as he jumped out to an early 4th position, with Rodrigo Ampudia in 3rd, Casey Currie in 2nd and Jimmy Stephenson in the lead.  The leaders stayed closely packed as they grinded for top position.  Steele overtook Ampudia in lap four with a little nudge from the side.  Brian Deegan passed Ampudia as well.  Heading to the caution flag, Steele fell a position to Deegan and Currie maintained his second place spot.  After some battling right out of the gate, Cameron’s truck got damaged and he fell behind in the pack.  Currie was unable to hold off red-hot Brian Deegan and Corey Sisler, a couple of laps later and finished in 5th place.

With only four races left, the Lucas Oil Off-Road Racing Series is going to get intense.  The next race is at Las Vegas Motor Speedway on November 5th and 6th, with the series finale at Firebird Raceway in December.  Pro-4 Champion Rick Huseman is once again in the hunt for the championship right behind former champion Carl Renezeder.  It may come down to the very last race of the season.