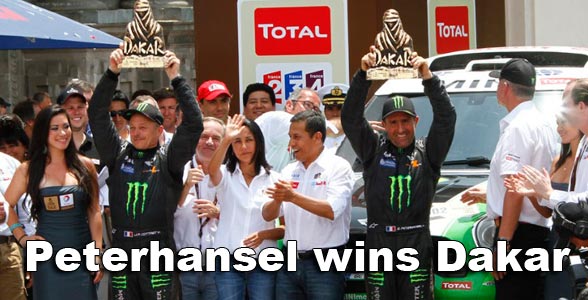 Monster Energy/Mini driver Stephane Peterhansel wins the 2012 edition of the Dakar today after completing 14 stages, 5205 brutal miles from Argentina to Peru with the fastest time. The 46 year old Frenchman is no stranger to winning at the Dakar series. During his off-road career he has won this race 19 times in various classes since his debut in 1991. During this years Buenos Aires to Lima Dakar rally he won 3 stages and had a spectacularly flawless run with no major reported problems.
Monster Energy/Mini team mate Nani Roma came in a  close second only 41 minutes behind Peterhansel, and took three stage wins. Third place belongs to Giniel De Villiers, while 4th place gets credited to fellow Monster Energy/Mini team mate Leonid Notvitskiy.
American Robby Gordon finished 5th place.

Link to ASO’s finisher in the car category: http://www.dakar.com/dakar/2012/us/stage-14/rankings/overall-cars.html#ancre

RDC
Robby Gordon and Johnny Campbell are the true winners of this years Dakar.
MR. ROBBY GORDON : LOOSER !!! EAT THE DUST ... HUNGRY JUNK FOOD, A SMALL CAR "MAN" WON YOU... AMERICAN FOOL AND FAT.
Before speaking ill of someone or something, THINK FIRST (IF YOU HAVE BRAIN) and then comment.
THAT newsprint, TYPICAL OF AMERICAN VIOLENT AND FOOLS.
This wil hit the books!!! First Girl Winnning the Dakar!!!!
Jutta Kleinschmidt was the 1st woman to win the Dakar in 2001...
And besides the fact that Peterhansel should have been reprimanded for clipping the Italian motorbike racer, Roma, De Villiers and Notvitskiy would still have been to be beaten by RG!
Robby shows he's got big balls with his driving style, if only it was efficient... My favourite for next year? De Villiers, who was consistent and took his brand new Toyota all the way to the finish! he definitely deserves a win after being the "porteur" for so many years when racing for VW.

Good luck non the less to Robby for next years race
Robby Gordon finally got a taste of his own medicine, to Robby: listen cheater, stop being a jack ass there are others who see through your lies. I realize u think your the cats meeyow but there tech inspectors for a reason mr racer. Stop thinking the world is below u bro. Without your dada letting u win ud be in my boat garage status lmao choke on your nitrous filled tires hommie.
Robbie we ain't mad at cha just make the USA proud, your like a politician whether u realize it or not u have all the skill in the world bra. Don't be George bush bra lol
Minis were lame they were scared they frenchies cried to frenchie officials and the do what Peckerhansel wanted ,,, Notice both winners were french,, with very favorable calls going there way.. But MINI put 5 cars in to win ,, thats big and ugly .. next year they should put in 10 .. With out RG this Dakar would have been a flop.... 5 of anything on the same team racing for the win is a joke,,,Its not a race--- Keep on RG dont listen to the Euros in their boys medium sized shirts
I just don't like how a French organized event was won by a French team after that driver hit a motorcyclist and was not penalized but when he started to realize that the Hummer was indeed faster than the Mini; magically French inspectors were all over the American Hummer saying it was not legal to race. Come play in our deserts Peterhansel and lets see what you got, otherwise, just wait until next year, we'll be back.
Murica!