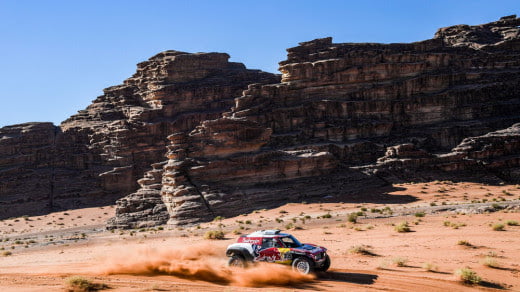 Former car winners hold nerve as Benavides and Walkner dig in on bikes.

Former Dakar Rally champions Carlos Sainz and Nasser Al-Attiyah used their experience to navigate their way safely through Tuesday’s stage three of the 2020 edition in Saudi Arabia as Kevin Benavides and Matthias Walkner shone on their bikes.

– Spaniard Sainz and Qatar’s Al-Attiyah moved into the top three on Monday and took advantage of leader Orlando Terranova’s stage three woe to move up higher.

– Two-time winner Sainz and co-driver Lucas Cruz were a class above around the 414km loop of future megalopolis Neom as they tamed the perilous mix of canyons, mountains and sand to pick up the 33rd stage win of Sainz’s illustrious Dakar career and the lead.

– Defending champion Al-Attiyah finished a few minutes back to lie just under five minutes behind overall as the first Saudi Arabian Dakar reached its maximum altitude of 1,400m.

– Polish driver Kuba Przygonski started to get into a good rhythm to finish third on the day as 13-time winner Stéphane Peterhansel and South African Giniel De Villiers also placed in the top 10 with the Frenchman now fifth overall after having a problem with his GPS.

– Sainz, 57, said: “The landscape was fantastic, even if we didn’t have time to stop and enjoy it properly. Lucas (Cruz, co-driver) made a really good job with the navigation and we were able to attack. It’s still very early and anything can happen, but so far so good.”

– Overnight bike leader Sam Sunderland had a day to forget as he finished 14th to slip back overall with Argentine Kevin Benavides and 2018 champion Matthias Walkner keeping in touch with American Ricky Brabec, who now leads overall by just under five minutes.

– Defending bike champion Toby Price stayed in the hunt with fifth place on the stage while fellow Red Bull KTM Factory Team rider Luciano Benavides (ARG) did his best to keep up in seventh, despite the added difficulty of riding part of the way with an injured hand.

– Now third overall six minutes behind Brabec, 33-year-old Walkner revealed: “They want to make the rally difficult, but maybe this was a bit too far. You need to spend so much time looking at the roadbook and this means that in all the sand you can miss a big stone.”

– In the truck category, Russian Dmitry Sotnikov’s mighty Kamaz came off second best in a collision with a rock that broke its front axle however compatriot Andrey Karginov had a smoother ride to triumph on the day to go second overall behind Siarhei Viazovich (BLR).

– Chilean quad master Ignacio Casale had to settle for third place, but he maintains a comfortable overall lead of over 14 minutes from Poland’s Rafal Sonik.

– Wednesday’s stage four heads to Al Ula via a timed special stage of 453km as the route leaves behind the Red Sea and travels east across spectacular moonscape terrains.