Pablo Quintanilla rose to the occasion with a super-aggressive ride that earned him the stage win but never came close to loosening Ricky Brabec’s iron grip on the general classification. Stéphane Peterhansel also went on the attack with Nasser Al-Attiyah, but even the Frenchman’s 80th career stage win was not enough to find a chink in the armour of overall leader Carlos Sainz. 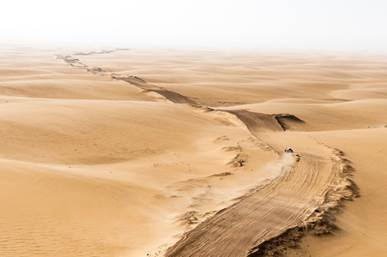 The Empty Quarter, a vast expanse almost as big as France, boasts long, unbroken successions of dunes stretching for 80 kilometres. In contrast with yesterday, when the prevailing winds messed with stage 10, the weather today made the terrain far more hospitable as the increased humidity meant fewer competitors got stuck. The return trip to Haradh was raced at a much higher pace. This area serves as the crossroads from which the Dakar will leave the Empty Quarter and set course for Riyadh and Qiddiya. 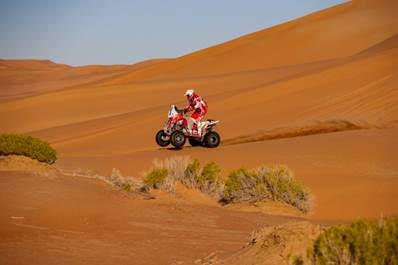 Pablo Quintanilla left nothing in the tank. The Chilean pulled out all the stops to topple Ricky Brabec, claiming his second stage in three days by a few seconds ahead of Matthias Walkner, who also threw caution to the wind. However, the overall leader will start the closing stage of the really with a healthy margin, as will Ignacio Casale, who left the win to Rafał Sonik in the quad category. Meanwhile, Carlos Sainz seems to have the car race in the bag despite Stéphane Peterhansel and Nasser Al-Attiyah unleashing their full might in a last-ditch attempt to claw back some time. While the Frenchman beat the Qatari by just a few seconds in today’s stage, it is Al-Attiyah who holds the provisional second place overall by a mere six seconds. The SSV race saw bigger gaps. “Chaleco” López put in a stunning performance today, but the overall is Casey Currie‘s to lose. Meanwhile, Andrey Karginov added a new stage win to his tally as Kamaz blew the opposition out of the water with a 1-2-3-4 in Haradh.

25-year-old Jamie McCanney, racing in his first Dakar and second rally altogether, did not want to put the cart before the horse. The up-and-coming Brit, who caught the attention of Yamaha when he became junior enduro world champion, is getting stronger as the Dakar goes on, scoring his first top 7 finish yesterday before going one better on the road to Haradh, finishing in sixth place at only six minutes behind the winner. It was an auspicious performance by the Manxman, who is sitting within the top 15 overall within striking distance of the “best rookie” distinction.

Yesterday’s performance of the day is today’s crushing blow. Pierre Lachaume went from heaven to hell in under 24 hours. After finishing stage 10 in fourth place and moving into the top 10 overall, the Frenchman did several barrel rolls 236 kilometres into today’s special and totalled his Peugeot 2008 DKR while descending a dune. This is the first time that he has failed to finish the race in five starts.

The number of stage wins by Stéphane Peterhansel in the greatest rally on Earth following his fourth triumph in 2020 in Haradh. The Frenchman, a six-time champion on a bike and seven-time champion in a car, has won 33 and 47 specials in these classes, respectively. He is the most prolific competitor in Dakar history by far. Trucker Vladimir Chagin, with 63 stage wins, is a distant second.

Ricky Brabec: “You know, today was a big distance. The mileage was definitely a concern. I rode about 70%. I was just trying to conserve the body and the bike. I’m happy we made it to here, so we’ll go back to the bivouac, prepare for tomorrow and have a good starting position for tomorrow, and not necessarily push, but just get to the finish line tomorrow. Tomorrow could be a really big day for us, so we’ll keep the positive vibes for sure.”