20 years ago a young rider by the name of Nani Roma threw his leg over a motorcycle and took his first green flag in the Dakar Rally.  Many attempts were made but he would only see the finish line twice.  It wasn’t until his 10th Dakar start that Nani Roma would finally finish the Dakar Rally with an overall win.  Fast forward 10 years, multiple teammates, multiple different car manufacturers, and the heartache of being unable to win an overall victory in the car category; Nani’s time has finally come. 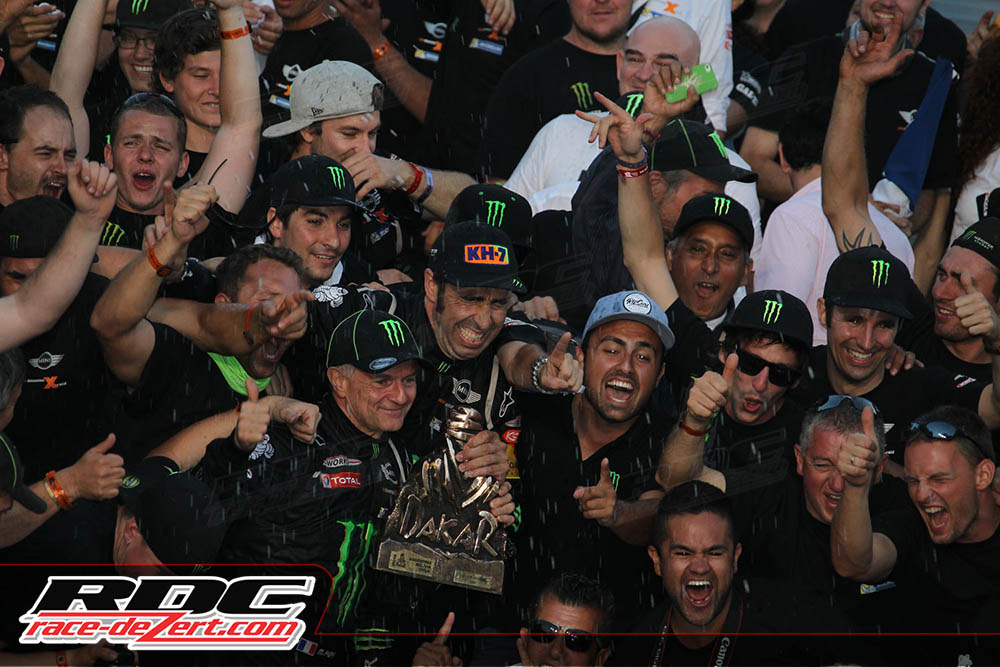 With tears in his eyes, Nani Roma explained, “I don’t know if this was the most stressful thing I’d ever done, but it was very tough. The second week, with difficult, long stages, wasn’t easy. We’re happy, very happy with the work Michel [Périn] and I did. I’m going to revel in this. 10 years to the day after winning on a motorcycle, I’ve won in a car. It’s a dream come true. “

It wasn’t a picture perfect Dakar for Roma, there were plenty of ups and downs along the way and just one stage ago he had lost the lead by a mere 28 seconds to 11 time Dakar champion “Mr. Dakar” Stephane Peterhansel.  Although Peterhansel held the lead in stage 12, team orders forced Peterhansel and Nasser Al-Attlyah to pull over in the middle of the rally so that Roma could go on to finish ahead of Peterhansel and win his first Dakar title in the car category.  Undoubtedly Peterhansel was frustrated with the outcome of the rally and frustrated with the team orders but he was also very excited for Nani Roma and excited to see his friend (Roma) accomplish something that he has been attempting to accomplish for so many years.  At the end of his finish line reporting, Peterhansel alluded to the possibilities of driving for Peugeot in the 2015 Dakar rally and said he was very excited to see what the future holds. 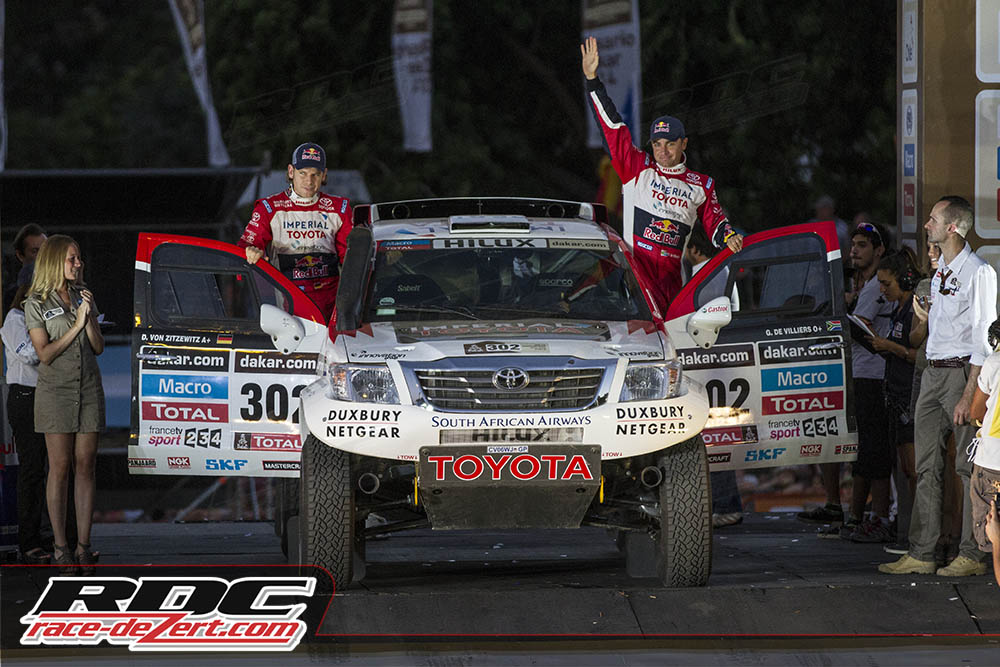 Today’s special was won by the hard charging Giniel De Villiers who was within reach the entire really but could never put all of the pieces together in order to stay in the top 3.  De Villiers would finish just 23 seconds ahead of Xraid Mini driver Krzysztof Holowczyc who made a very strong the entire rally.

After all of the time was calculated and penalties were assessed the Monster Energy Xraid Mini team would absolutely dominate the 2014 Dakar Rally filling the top 10 positions with 7 Xraid Mini’s.

The last stage of the rally is always indented to make sure that competitors make it to see the finish and that it isn’t too difficult after having already went through 12 days of racing and in the drivers seat for over 50 hours.  What seemed to be an impossible comeback for Marc Coma after nearly ending his motorcycle-riding career, Marc Coma would take Stage 13 with ease and not let his emotions get the best of him along the way.

Finishing in 18th position nearly 11 minutes behind stage leader Joan Barreda Bort, Marc Coma pulled in to Valparaiso Chile with plenty of time to spare and the thoughts of a 4th Dakar victory became reality.

Coma went on to say, “These are really strong, personal feelings. It represents a shedload of sacrifices and hard work. It’s an extreme race with ups and downs. Looking back, I remember being unable to start last year’s race. And yet I’m here now, I’ve won. I’d like to thank those around me who made this comeback possible. Every time I win this rally, I say I’m going to savor it. I’ll do it with my loved ones, my family. I don’t know if I’ll ever win it again. I’ll try, I’ll work hard for it, but it’s a very complicated rally.”

After a penalty was assessed to Cyril Despres (who physically finished first), Joan Barreda Bort would end up on top for today’s stage followed by OlivierPain and Helder Rodrigues who all were within a minute and a half of Barreda Bort.

There is no question as to why they call the Dakar the hardest off road race in the world, only 47% (78 motorcycles, 15 quads, 61 cars and 50 trucks) of the competitors who stated just 14 days ago would make it to the finish in Chile.  As speculation would have it, it was indeed the hardest Dakar Rally ever routed though South America.  We will be anxiously waiting for the 2015 Dakar Rally:  New teams, new teammates, more American built cars, new drivers and perhaps the entrance of world champion WRC driver Sebastian Loeb into the world of Rally Raid.

It was a rough road for American drivers in the 2014 edition of the Dakar Rally. We didn’t quite get the results that we had hoped for nor did we see the domination from Robby Gordon like we had all been waiting for. Privateer efforts in off road racing are just about everything that we as North American off road racers can depend on. Support from the off road community is nothing short of the largest pit crew in the world and win lose or draw; they are still our heroes and have attempted something that many of us will never be able to even fathom.

The never say die attitude is what separates us (North American off road racers) from the rest of the world. Not a single mechanical failure or wrong turn will detour us from attempting to accomplish what we have set out to do. American Robby Gordon struggled from day one with cooling issues in the HST Gordini and in stage 11 he would finally be forced to retire from the rally. The exciting combo of BJ Baldwin and Quinn Cody only retired from the race when they were absolutely forced to the sidelines after a large puncture in the cars fuel cell. Martillo Racing had everything in line for what could be a huge showing at the 2014 Dakar, unfortunately for Martillo Racing they would be left to settle for a 52nd overall in the rally. SCORE International Class 10 World Champion Peter Hajas would also be forced into retiring early from the rally in his Brenthal buggy due to mechanical failure.

It is not the spirit of off road racing that keeps us from continuing on, it’s what remains broken until we meet the Dakar again…