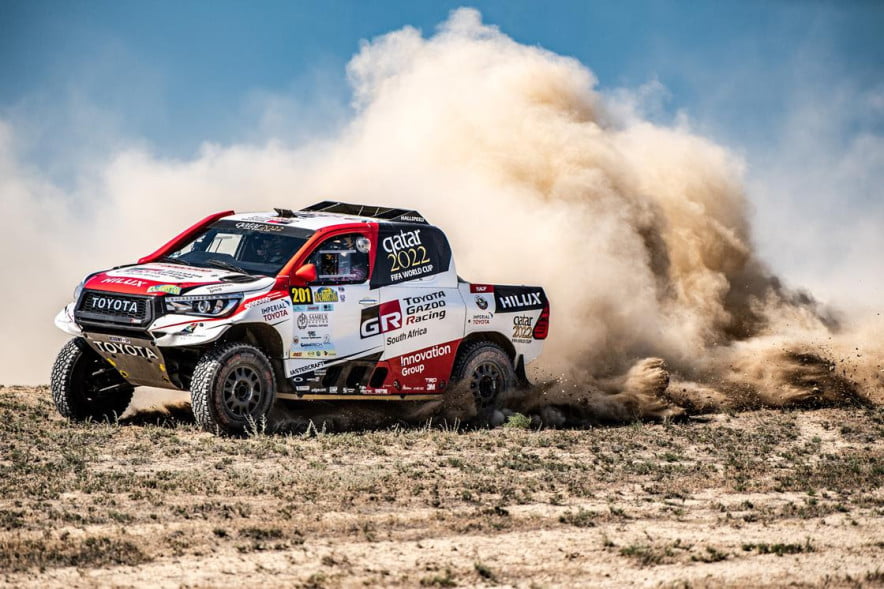 Reigning Dakar champion Nasser Al-Attiyah (QAT) has made a blistering start to the 2019 Rally Kazakhstan. The Qatari ace and his co-driver Mathieu Baumel (FRA) have set the fastest time on the opening three stages of the rally to sit top of the leaderboard at the midway point.

Al-Attiyah and Baumel currently enjoy a 12-minute advantage over their closest competitors thanks to a faultless display of driving and navigation. The pair’s victory on stage three saw them open the road for a challenging 327-kilometer dash through the Mangystau region to the east of Kenderly.

“It was not an easy stage, very different to the last two days and more technical.” – Nasser Al-Attiyah

12 minutes behind the Toyota Hilux of Al-Attiyah and Baumel is an intense battle for second place. Currently, only 27 seconds separate Bernhard Ten Brinke (NDL) and Kuba Przygonski (POL), after more than nine hours of racing through Kazakhstan. Reigning FIA World Cup for Cross-Country Rallies champion Przygonski knows he needs to up his game alongside Timo Gottschalk (GER) if they are to finish second, or even higher.

“We were a bit too slow in the sand at the start. We had one puncture but gained time in the last section on the fast tracks.” – Kuba Przygonski

Next up is the husband and wife crew of Stéphane (FRA) and Andrea Peterhansel (GER) who have been battling back from misfortune on the opening stage. The couple’s MINI John Cooper Works Buggy suffered a damaged tire when traveling at high-speed and changing the wheel cost plenty of time.

Better results on the next two stages have seen the Peterhansels move up to fourth overall, despite a moment of confusion on stage three.

“A few kilometers before the end I made a mistake with the navigation because I thought I knew where we were going; I should have listened to Andrea!” – Stéphane Peterhansel
Stéphane Peterhansel went into his debut Rally Kazakhstan as joint leader of the 2019 FIA World Cup for Cross-Country Rallies with Nasser Al-Attiyah. Whoever gets the better result in Kazakhstan will take the outright lead of the championship.
It has been mixed fortunes so far at Rally Kazakhstan for the truckers of Team Kamaz Master. Current Dakar champion Eduard Nikolaev (RUS) saw his race end on the first stage after his truck fell into a deep ravine and sustained big damage when it landed on its side. The news has been better for Nikolaev’s team-mate Dmitry Sotnikov (RUS) who holds first place in the truck race by over four hours after three stages.
Tomorrow’s fourth stage of the rally is the second longest, with 399 kilometers against the clock. It will take the convoy back to Aktau where the final two stages will be held before the rally finishes on Saturday, June 1.

Nasser Al-Attiyah: “It was not an easy stage, very different to the last two days and more technical. I was quite happy to be pushing hard, but as the first car made two or three mistakes finding the road. Ahead of us are three more days of the race. We intend to fight for victory until the very end.”

Kuba Przygonski: “We were a bit too slow in the sand at the start. We had one puncture but gained time in the last section on the fast tracks. We need to keep our result stable and gradually improve it, thinking of how to distribute our efforts. The level of the race has grown very much both on and off the track.”

Stéphane Peterhansel: “The third stage was more technical, but it was all OK for us. We had to stop once to clean the windscreen; with the wipers, it was making a real mess. A few kilometers before the end I made a mistake with the navigation because I thought I knew where we were going; I should have listened to Andrea!”