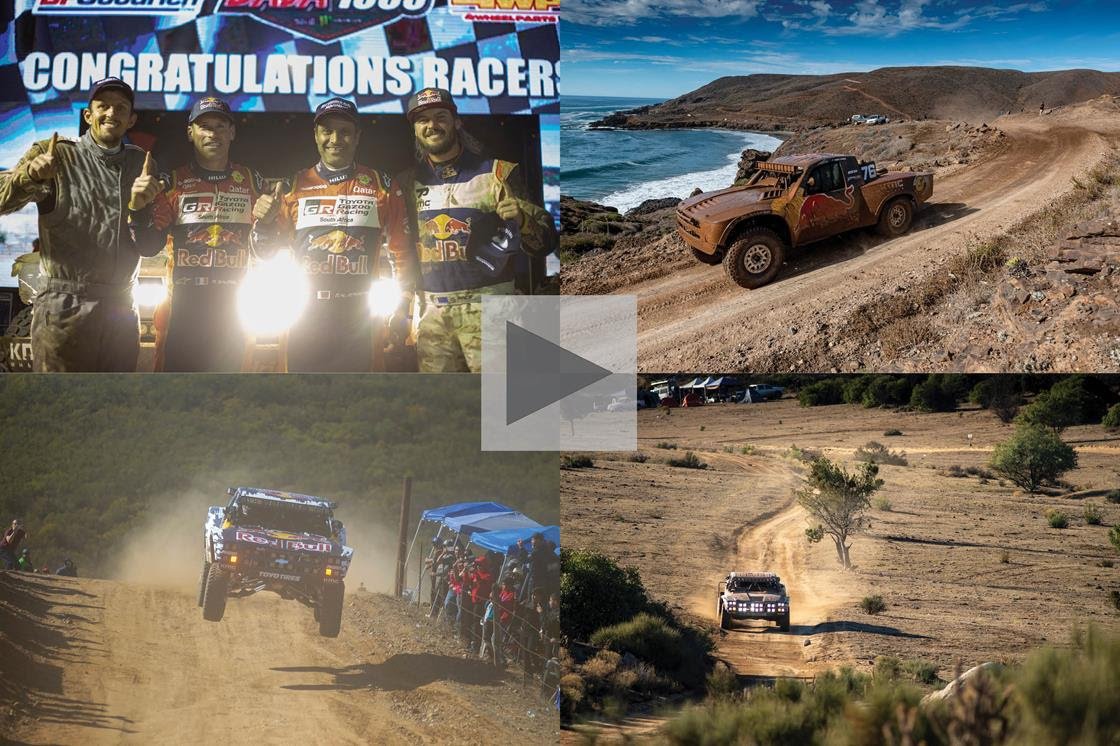 Muddy, rocky Baja roads and hours of driving at night was a new challenge for Nasser Al-Attiyah and co-driver Mathieu Baumel – not to mention he only had about 30 kilometers of seat time in a trophy truck. But the Qatari Dakar champ proved up to the challenging as he and race partner Toby Price with co-driver Dustin Hellstrom hased down all but two other trophy trucks after starting from the back of the pack.

“It’s totally different from what we’re used to. We had a lot to learn from this type of terrain and style of racing, but we enjoyed it a lot and learned a lot – and I am really impressed with this truck! I am sure next year we can come have a good fight with the top drivers!” – Nasser Al-Attiyah

The Baja 1000 is much different than rally raid – rather than a multi-day race, it’s a one-shot, no-stop battle – meaning one truck does the whole racers, but drivers swap to stay fast, and stay safe. This year, Toby Price started the race, with a primary goal of not fighting to the front of the pack, but getting the truck to Nasser in good shape so he could work his magic to claim the number 2 position. Quite the accomplishment for Nasser’s first race with Toby and first race in Baja!

“I think we started 26th or 28th this morning, so to be the third trophy truck across the line – we dealt with a lot of people, a lot of passing, but I think the rookies, Nasser and Mathieu, did pretty good!” – Toby Price

The #31 trophy truck – piloted by Andy McMillin and Bryce Menzies – rolled early on in the race, doing significant damage. Support crews were able to get the truck moving again fairly quickly, but combined with more mechanical issues later in the race, they were out of contention for the podium. Despite finishing in 13th place in this race, Andy McMillin managed to win the SCORE World Desert Championship thanks to his two wins at the Baja 500 and San Felipe 250 and a second-place finish at the Baja 250.

“I take full responsibility – I feel so bad for the McMillin family and the McMillin team for all the hard work they put into it. There’s nothing you can do, you put all this time into it and it’s thrown away because the other guy made a mistake. And I guess that’s racing and I gotta live with that. Huge thanks to Andy and his family for allowing me to come out and race with them.” – Bryce Menzies

“That as a wild race. As soon as I knew we couldn’t win the race, winning the Championship became our only goal. Baja tried to beat us and it did for a little while, but we came back fighting.” – Andy McMillin

At the finish line, a very excited Nasser and Toby had no hesitation to promise they’d be back again next year.

Find images and stories related to the SCORE Baja 1000 here

Nasser Al-Attiyah
Today, we did a good job – for me, for the first time to be here, and for Toby, who took the truck to 535 mile. We’ll come next year with a good plan to win this race!”

“We’d really like to thank Jesse Jones for giving us a chance to drive this amazing machine – we’re really impressed with it. It’s completely different from what we use in the Dakar Rally, but we learned a lot and enjoyed it a lot!”

Toby Price
“The truck was straight out of the box – we got it the morning before the race, I put 10 miles on it, Nasser put 20, then it was ready for racing! It got us here to the finish line with a podium position, definitely can’t complain! Our biggest thanks to Jesse – he basically built this thing for us brand new – sorry we couldn’t bring it back looking the same!”

“Big thanks to Nasser to have him here and be part of this race – hopefully we can do a little more pairing up!”

“We did a lot of pre-running miles. The guys in front of us know the terrain extremely well, so we needed to put in the work to make sure we could be up front. It was unexpected to be up there on the podium, but we wanted it and it came true!”

Bryce Menzies
“Spent two weeks pre-running, did over 2000 miles, we had every rock, every turn, every cliff, every inch of that race course… but one rock that I’d never seen, never noticed was the one that bit us. I had a flawless race going! No problems, no flat tires, truck was running great.”

“The goal was to get Andy to the finish line to win the championship. At 586 we heard we had a transmission failure, so we sent the guys out there to fix it – and from there, they had a great run.”

“I take full responsibility – I feel so bad for the McMillin family and the McMillin team for all the hard work they put into it. There’s nothing you can do, you put all this time into it and it’s thrown away because the other guy made a mistake. And I guess that’s racing and I gotta live with that. Huge thanks to Andy and his family for allowing me to come out and race with them.”

Andy McMillin
“That as a wild race. As soon as I knew we couldn’t win the race, winning the Championship became our only goal. Baja tried to beat us and it did for a little while, but we came back fighting.”

“My team and Bryce’s team persevered through some issues and put our heads together and made it to the finish. It’s great to win the championship – it says a lot about our team.”

“Baja has a way of humbling you and it humbled us today. It really makes you cherish wins and good runs because they are hard to come by.”

Read about Nasser’s epic sweep of the Silkway Rally here