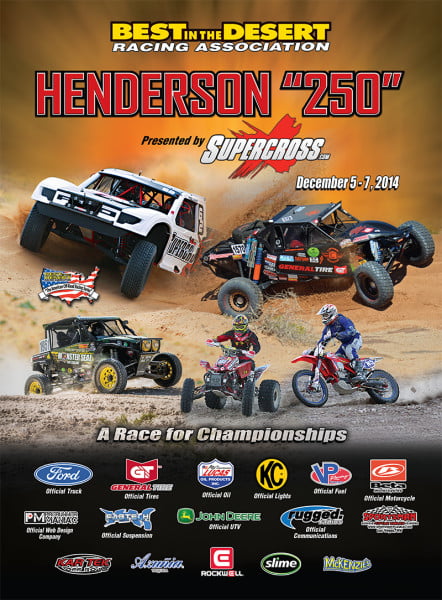 A Race for Championships

December 5 – 7, 2014
November, 2014 – Las Vegas, NV
2014 has been a record year for Best in the Desert in terms of entries, and this race is no exception. The last race on the Best In The Desert’s 2014 calendar is turning out to be a real challenge amongst competitors, with so many season class championships riding on it, and nearly 160 entries to date. Multiple car and truck class championships will be decided at the end of the day when the dust settles on this last race of the season. The Henderson “250” is also a “double points” race, so anything can happen in the final points shuffle. The race course is in compliance and meets all of the environmental concerns by the BLM. We work very hard at Best In The Desert to comply with the rules and regulations and we appreciate our racers doing the same; we all must protect our environment and respect the rules. 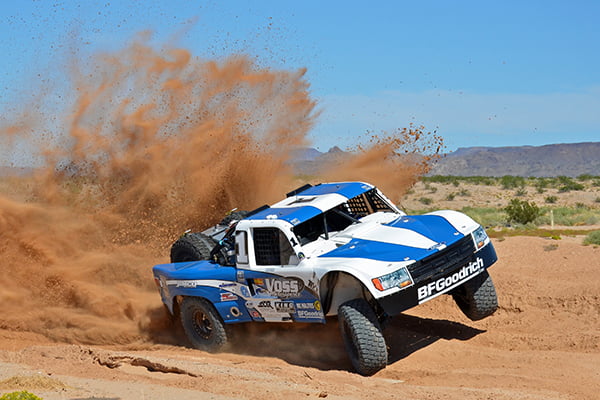 Coming into this race, Jason Voss holds a commanding points lead over Carl Beal and Troy Vest who are tied in second. Not far back and ready to challenge should something happen to the top three, is Carty Beal. It comes down to whichever driver and team can put together a great race and hang on for the championship. 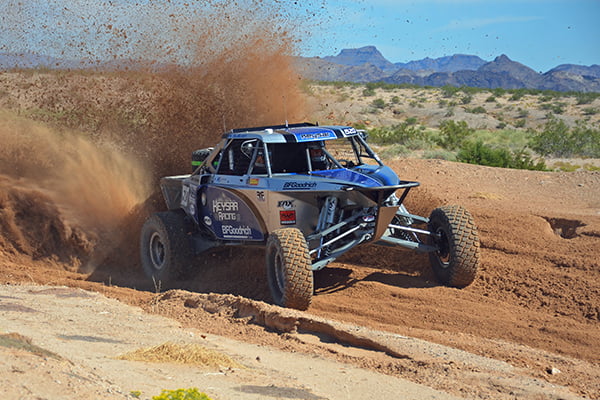 In Class 1500 for the unlimited buggies, Corey Keysar holds the lead heading into Henderson. He is closely followed by fellow competitors Justin Lofton who sits in second and Jon Walker, the defending 2013 Class 1500 Champion. 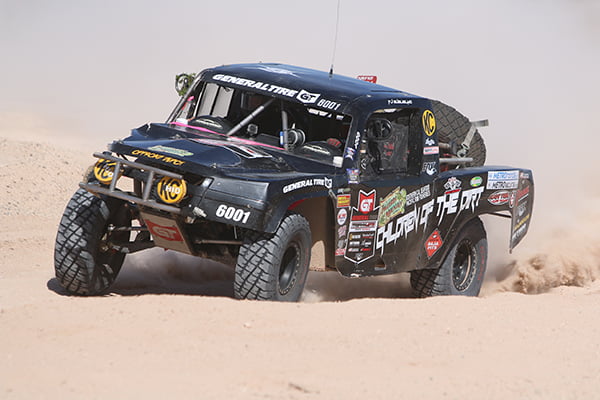 Three drivers have a shot at winning the Class 6000 championship. Unless disaster strike, it appears that PJ Gugliemo will repeat his 2013 Trophylite Championship. He is folllowed by Todd Jackson and Ben Abatti III. 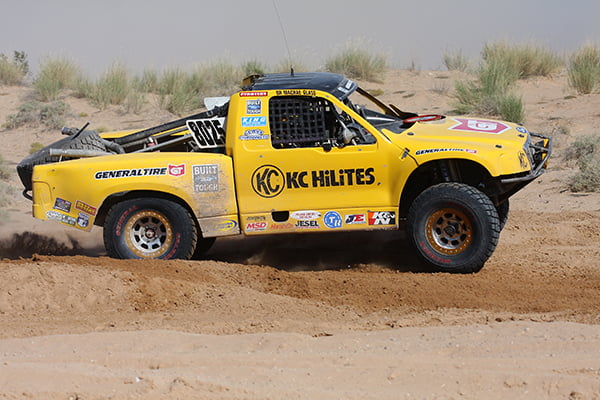 No stranger to the Class 8000 Championship, Macrae Glass has domionated the class all year, needing only to start his race to claim the top prize.

Not only will this be a great race for the racers and teams, but it’s also going to be an exciting event for racing fans too. The Henderson “250” presented by Supercross.com is an exceptional spectator friendly event. The weekend festivities will start with the Time Trials on Thursday and the Downtown Henderson Party all day Friday! Plus, there are designated “spectator only” areas on BLM controlled land for the actual race. The BLM gave their approval for them due to the extreme attention to safety for all involved by Casey Folks and Best In The Desert in all their events. Best In The Desert personnel will man all of these “spectator only” areas and feature easy paved road access.

Casey Folks had this to say about this last race of the season, “There is no doubt in my mind that the Henderson “250” presented by Supercross.com has become a truly grand off-road racing event. From the fun, challenging racecourse, to the exciting setting of the beautiful downtown center of Henderson, Nevada, a great adventure for everyone! I would also like to take this opportunity to personally thank everyon involved from the City of Henderson. Their goal is to create a special celebration atmosphere in downtown Henderson, and they continue to achieve it every year.”
Camburg “Best in the Desert” Award for Fastest Average Speed Award Update:

The streets will be closed off to traffic on Friday, December 5th, from 9:30 AM until 5:3 PM for contingency and technical inspection. Spectators and race fans can soak up the spectacle of the parading race vehicles along with their drivers and crews. They can also check out all the awesome products on display as they weave their way down the street lined with block-after-block of race related manufacturers and street vendors. There will be nonstop action all day long and into the evening in downtown Henderson, fun for the entire family!

Friday, December5, 2013
9:30 AM to 5:30 PM – Contingency & Technical Inspection for all race vehicles
On Water St. in downtown Henderson

Saturday, December 6, 2013
6:15 AM – 1st Race for Motorcycles, Quads & UTVs
These classes will race around an approximate 45-mile loop three times, for a total of 135 miles, with a gran prix finish

The American Off-Road Racing Series…Best In The Desert!