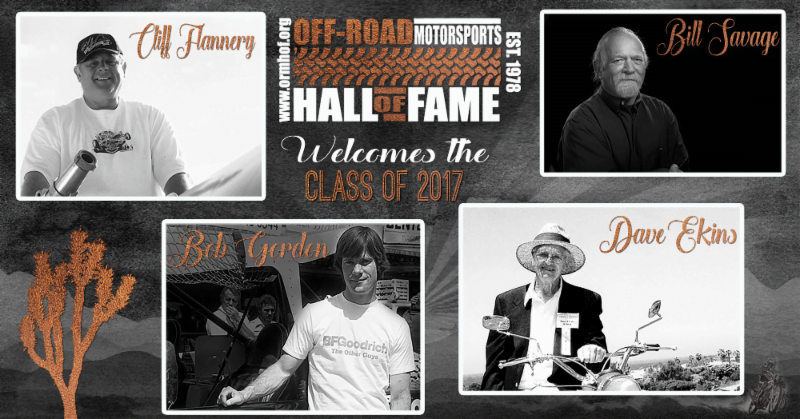 Reno, Nevada – The Off-Road Motorsports Hall of Fame (ORMHOF) is proud to announce the Class of 2017. Twenty members of the off-road community evaluated a record number of nominations and cast votes independent of the other committee members. Nominees who received votes from at least two-thirds of the committee members were considered for induction. The nominees who have met the criteria are the members of the Class of 2017 include motorcycle racing pioneer Dave Ekins, Crandon Raceway founder Cliff Flannery, off-road legend Bob Gordon, and off-road innovator Bill Savage.

The Inductees will be celebrated at the ORMHOF Induction & Awards Ceremony on Monday, October 30, 2017 at the South Point in Las Vegas. The 2017 Off-Road Motorsports Hall of Fame Induction & Awards Ceremony is being presented by SCORE International. South Point owner and ORMHOF Inductee Michael Gaughan will host an open bar during the cocktail hour and silent auction, followed by the banquet, Induction Ceremony, and awards. The event is open to the public. For ticket information visit www.ormhof.org. 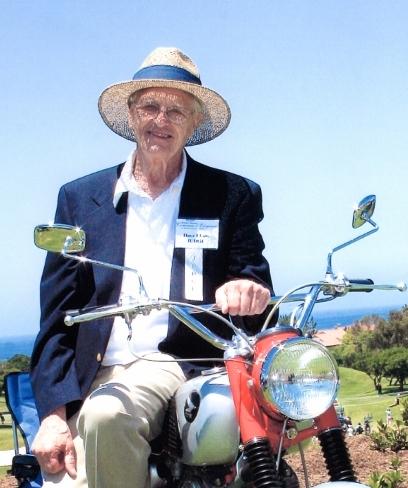 39 hours and 56 minutes. Dave Ekins and his riding partner, Bill Robertson, were the first to establish a timed and documented record from Tijuana to La Paz on a motorcycle. It was March of 1962 when the duo set the record that became the precursor to the race that would become the Mexican 1000 and today’s Baja 1000. NORRA founder and Hall of Fame member Ed Pearlman presented Dave Ekins with the coveted number 1 motorcycle plate, to commemorate the historic 1,000 mile motorcycle run down the Baja Peninsula. Dave and his brother Bud grew up riding motorcycles in the hills above Los Angeles. During his teenage years, Dave was more interested in cars than motorcycles. “It was easier to date a girl in a car,” he explained. Once he turned his focus back to two wheels, it wasn’t long before Dave was becoming well known, like his brother Bud. In 1954, he won his class at the Catalina Grand Prix, establishing himself as one of the leading riders on the West Coast. One of Dave’s proudest accomplishments is winning gold in the International Six Day Trial, one of the longest running and most prestigious motorcycle events in the world.

Dave competed in five ISDTs over the years. Another one of Dave’s many accomplishments is being the first motorcycle rider ever sponsored by American Honda. In 1961, he was among the first group of Honda representatives to travel to Japan. In 1988, Dave was honored at the 50 years American Honda event in New York. Harley Davidson came calling, asking Dave to design their 100cc HD Baja motorcycle. The HD team t hat Dave put together included Hall of Fame inductee Larry Roeseler. Dave, Larry and their team dominated AMA District 37 competition and made their way into Baja racing history. In 1967 Dave began a 10-year career as a motorcycle magazine editor, when he accepted a position with Cycle Magazine. 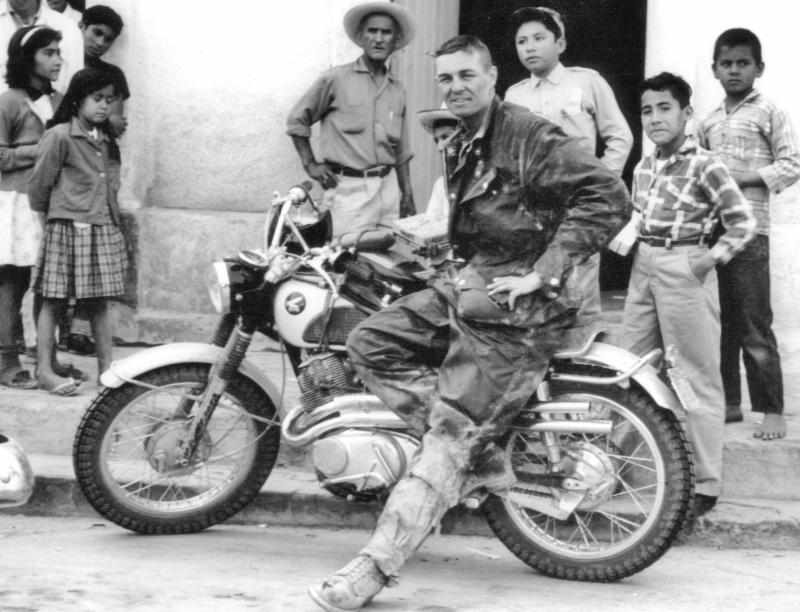 Dave also worked at Modern Cycle, launching Dirt Rider, one of the first off-road motorcycle magazines, and later working at Motorcyclist magazine. Dave is also an innovator. In the 1970s, he developed the first kidney belt to feature a Velcro-fastener. In another business venture, Dave founded Sunline, a motorcycle aftermarket parts company. The Ekins brothers, Dave and Bud, are both members of the AMA Hall of Fame, and now Dave will be joining Bud as a member of the Off-Road Motorsports Hall of Fame. 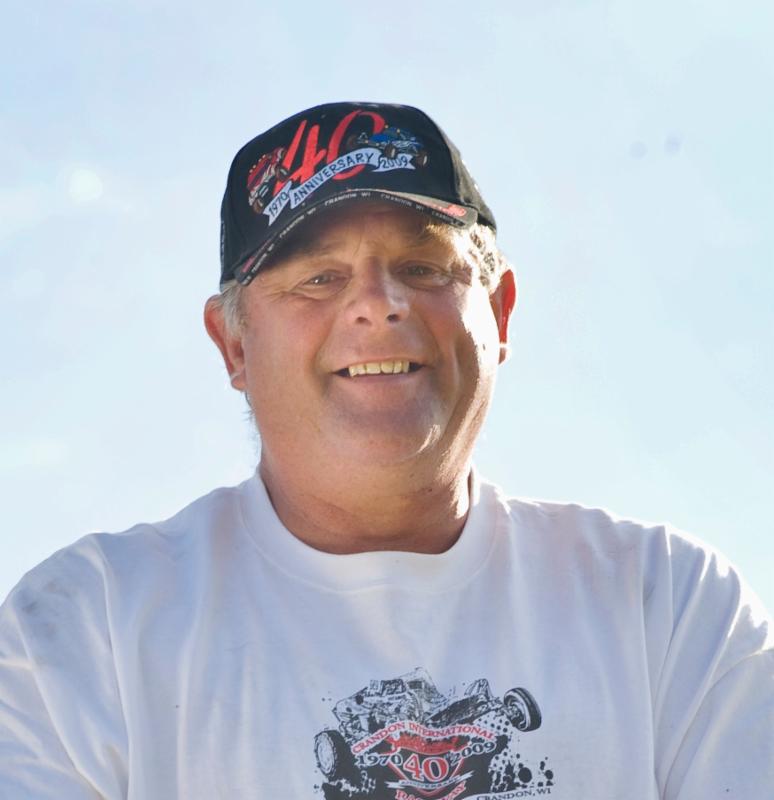 They call it the dirt ‘Field of Dreams’, 400 acres of off-road nirvana in Crandon, Wisconsin. Crandon plays host to home town races as well as some of the largest televised short course events in the world.

While his brother Jack was inducted into the Hall of Fame for his racing success, Cliff is the one who provided his brother Jack, and countless other racers, the opportunity to race at a world class facility.

Crandon Raceway is one of the few off-road facilities outside of the American Southwest, and has been Cliff’s life’s work for nearly 50 years.

The dream of Crandon Raceway was born in 1968, after a group that would become known as the Wolfs Head Sportsman Club watched a broadcast of the Mexican 1000 on ABC’s Wide World of Sports.  The group decided to hold their own race through the woods around the tiny Northwoods Wisconsin town of Crandon. The track was originally a 101-mile race consisting of four 25-mile loops and a big mud pit.

By the mid-1970s, under Cliff Flannery’s leadership, the group decided to build upon the success of their race and purchase land just one mile from downtown Crandon. It was on this ground that Cliff Flannery began to build the largest short-course facility of its type in the world. Cliff has continued to grow and improve the facility over the years, and in 2016 Crandon hosted the inaugural Crandon World Cup, the first independent off-road short course ‘Super Bowl’ that is part of the prestigious Red Bull Signature Series.

While creating and managing a facility like Crandon is certainly a Hall of Fame worthy achievement, it was Cliff Flannery’s philanthropic work that made the biggest impact on the voting committee.  Each year, Crandon donates nearly $70,000 to support local youth and charity organizations, a tradition started by Cliff Flannery decades ago. Over the years, the donations from Crandon Raceway have had an economic impact of more than $2 million in the local community of only 1,300 residents. Crandon Raceway also provides up to $30,000 in college scholarships to local students each year. 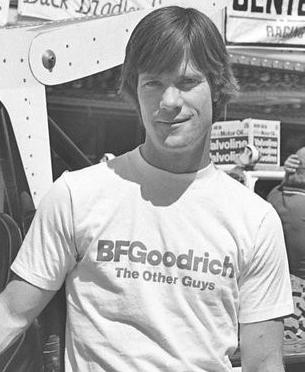 He won so many races south of the border that he earned the well-deserved nickname of ‘Baja Bob’. The Off-Road Motorsports Hall of Fame is proud to welcome Legacy Inductee Bob Gordon.

Bob was introduced to the sport of off-road racing by Frank ‘Scoop’ Vessels, also a Hall of Fame Inductee. Bob Gordon quickly found success behind the wheel of one of the “BFG Blazers” as part of a two car team sponsored by BFGoodrich.

In the 1980s and 90s, Bob built a relationship with Chenowth and started racking up an impressive list of victories.

In 1987, Bob won the Baja 1000 with Malcolm Smith, and teamed up with son Robby and daughter Robyn to win again in 1990. After retiring from racing to help Robby run his off-road programs, Bob brought his favorite Chenowth, affectionately known as ‘Betsy’ out of retirement to compete for several years in the NORRA Mexican 1000, where he was the overall winner in 2010, 2011, and 2015.  Bob passed away in 2016. 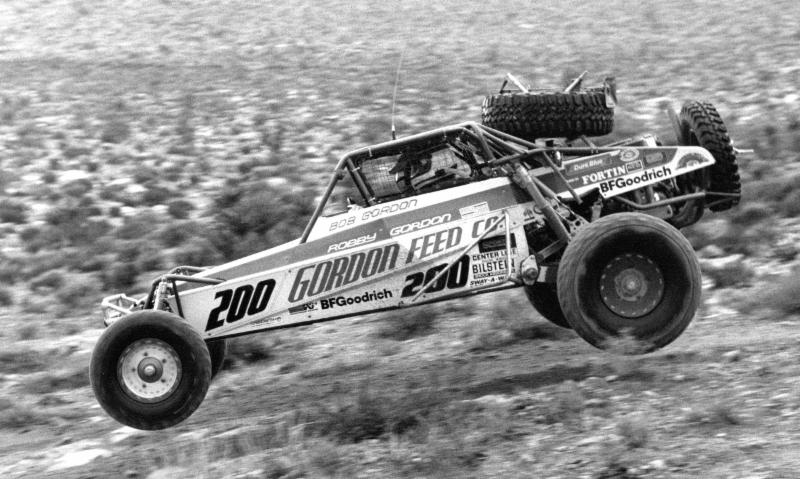 A statement from the Gordon family reads, “The Gordon Family would like to thank everyone for making this possible for our father, ‘Baja Bob’ Gordon to be inducted in to the Off-Road Hall of Fame. He would be humbled and honored to be recognized alongside racing legends and friends; Scoop Vessels, Malcolm Smith, Parnelli Jones, Mickey Thompson, Walker Evans and Ivan Stewart. Desert racing and Baja have become an integral part of our lives. Baja will never be the same without him, but his legacy and spirit will race on. We know he will be with us at every race mile marker along the way.” 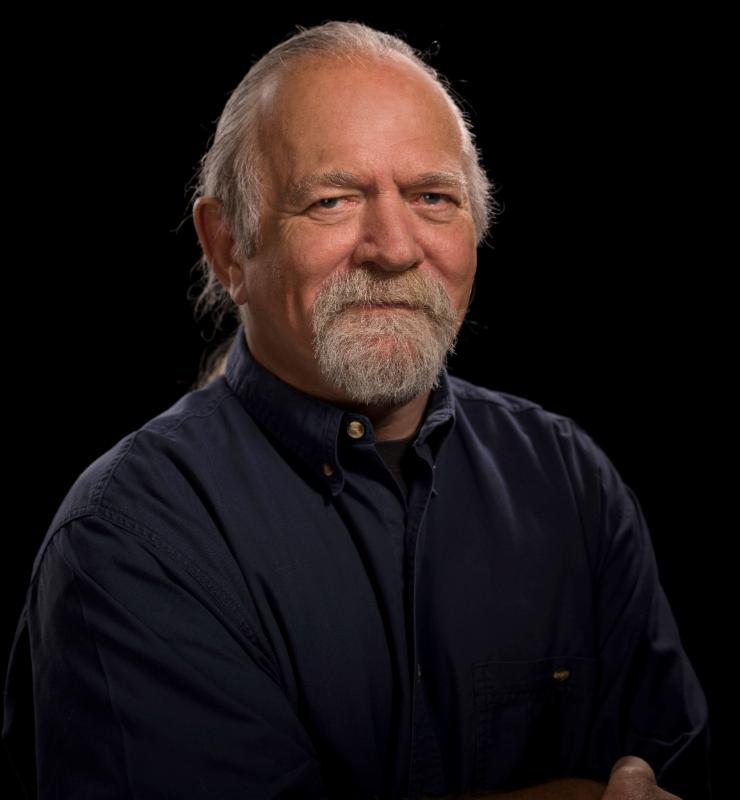 College student Bill Savage opened TMAG welding in 1972.  After spectating the Baja 1000 in 1974, Bill was hooked. It took him several years, between finishing college and managing his busy shop, before his first car was ready to race. Bob entered the 1979 Baja 1000, winning his class.

TMAG has designed and built a wide variety of innovative off-road parts and vehicles, including a VW production parts, off-road shocks, steering systems, and one of the first all tube space frame trucks ever built.

Among his many business ventures, Bill partnered with Todd Clement and started Wide Open Baja, a tour company that would give non-racers the Baja 1000 experience. The prototype cars were built at TMAG, with another 42 cars being built at Todd’s Horsepower Ranch in Baja. In subsequent years, Bill relocated his company and changed the name from TMAG to SPD Products. Speed and Performance by Design (SPD) built off-road trucks that went on to win many races, including the Baja 500 and Baja 1000.

It was then that NASA came calling, inviting Bill to attend a meeting with NASA engineers. They wanted Bill’s help in designing and building a new Lunar Rover. Bill jumped at the chance. SPD built three Lunar Rovers, and helped with testing. NASA wasn’t done with Bill yet, next it was a Mars Rover they were wanting. SPD went on to build two Mars Rovers for NASA, and have since been involved with several more NASA projects.

Throughout his career as an off-road innovator, Bill has always circled back to his interest in keeping the racers safe. He has written the rule books for every major off-road association for the past 37 years.  Bill has spent countless hours organizing teams to manage pre- and post-tech race inspections, a thankless and controversial job to say the least. Bill continues his quest to keep the racers safe in his current position as Technical Director for the Lucas Oil Off Road Racing Series.

Photo: Bill Savage’s off-road career has, at times, truly been out of this world.  Bill helped design and build this Rover prototype for NASA. 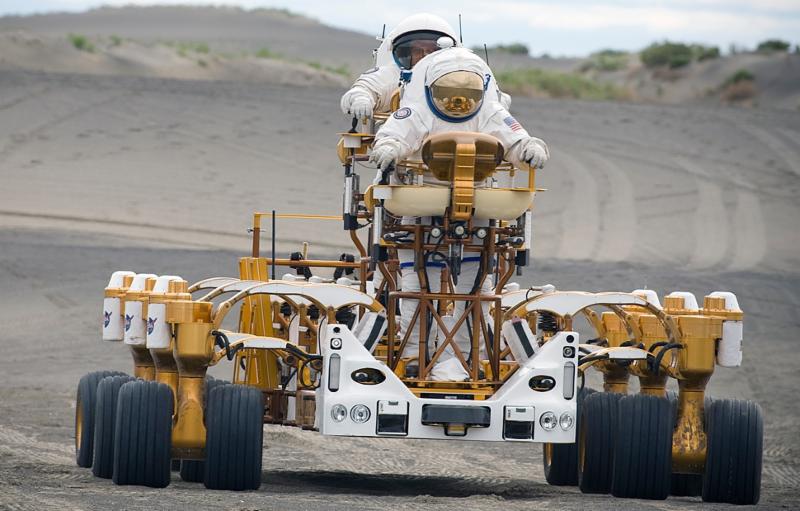