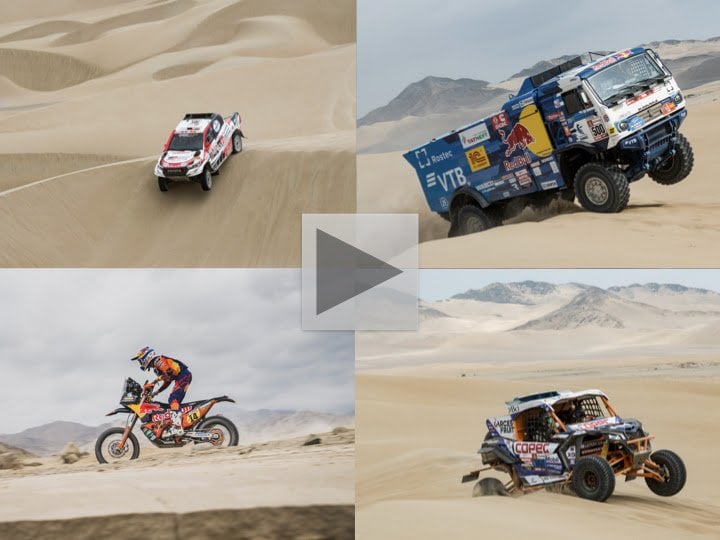 The glorious day that all desert racers have been waiting for finally arrived as the 2019 Dakar Rally got started today. All the months of preparation were put into practice on the dunes around Pisco as stage one as the world’s toughest rally got underway.

The opening special stage took place after a 247-kilometre liaison route brought the Dakar convoy from Lima to Pisco – then it was 84 kilometres against the clock in the dunes. The journey south along Peru’s Pacific Ocean coastline was clearly enough to bring the best out of the rally’s serious competitors.

Nasser Al-Attiyah (QAT) wasted no time reminding everyone about his sand racing credentials as his Toyota Hilux flew out of the traps in Pisco. The two-time Dakar winner and his co-driver Mathieu Baumel (FRA) were two minutes quicker over the dunes compared with the second placed crew of Carlos Sainz (ESP) and co-driver Lucas Cruz (ESP) in the MINI John Cooper Works Buggy.

“We just try to do our best every day. Today we won the stage and tomorrow we’ll try our best again.” – Nasser Al-Attiyah

“We’re pleased that we were able to fight with the top guys.” – Kuba Przygonski

Get stuck into the dunes with our Dakar vlog right here.

The bikers were quick to open the throttle on the opening stage of the 41st Dakar Rally. Honda rider Joan Barreda (ESP) blasted his way over the dunes to collect the 17th stage win of his Dakar career. While Barreda holds the early lead, he was joined in the Top 10 by Red Bull KTM Factory Team riders Sam Sunderland (GBR), Toby Price (AUS) and Matthias Walkner (AUT).

“There’s always a lot of nerves and hype around the first stage.” – Sam Sunderland

A little further back, but still inside the bike race Top 20 after stage one we find; Luciano Benavides (ARG), Stefan Svitko (SLO), CS Santosh (IND) plus Daniel and Walter Nosiglia (BOL). Laia Sanz (ESP) is the top placed female rider in 31st place.

“We still have such a long distance in front of us, but today was an important step.” – Laia Sanz

There were successful debuts in the SxS/UTV class for Chaleco Lopez (CHI) and Ignacio Casale (CHI). The Chilean pair both ran at the very front of the race on day one with Lopez finishing the stage with the second fastest time. Casale wasn’t too far behind as he finished fourth on stage one.

“The adventure has begun again and it feels great to be back racing at the Dakar Rally.” – Chaleco Lopez

It was a strong start to the latest Dakar for defending truck race champion Eduard Nikolaev (RUS). The Russian trucker is chasing his fourth Dakar truck win as a driver for Team Kamaz Master. Nikolaev’s stage win on the opening day of competition is the best possible start, but he’ll be wary that the Iveco trucks of Ton Van Genugten (NDL), Federico Villagra (ARG) and Gerard De Rooy (NDL) were all able to stay in touch.

“At times during the stage I could see some rival trucks in my rearview mirror, but they never came close enough to pass us.” – Eduard Nikolaev

Tomorrow’s second stage steps things up in terms of distance and difficultly. The convoy is off to San Juan de Marcona and to get there they need to complete 350 kilometres of racing against the clock. Expect a fair amount of drama in the dunes on Tuesday as the cars lead off and are forced to make the first tracks in the sand.

Nasser Al-Attiyah: “We caught Carlos (Sainz) in the last 10 kilometres and comfortably won the stage. I don’t mind starting as first car tomorrow, it’s really no problem. We just try to do our best every day. Today we won the stage and tomorrow we’ll try our best again.”

Carlos Sainz: “We did not have any major issues today. We knew what to expect. Furthermore, we didn’t want to have to open tomorrow’s stage, so that is why we took it a little easier today.”

Kuba Przygonski: “Low visibility made things tough for us today. We’re pleased that we were able to fight with the top guys. Coming in one second behind Carlos (Sainz) is a good result for us.”

Sam Sunderland: “There’s always a lot of nerves and hype around the first stage. I’m happy to get through this one safely, I didn’t take too many risks out there. Tomorrow is going to be tricky with the cars starting up front. I’ll be doing my best to stay out of trouble.”

Laia Sanz: “Today was a very fast stage so it was useful as far as gaining confidence racing at speed is concerned. We still have such a long distance in front of us, but today was an important step towards making it to the finish of another Dakar Rally.”

Chaleco Lopez: “The adventure has begun again and it feels great to be back racing at the Dakar Rally. We know this rally will be shorter than other editions, but at the same time it may be the hardest route I have ever done.”

Eduard Nikolaev: “Today was about getting the balance right between going fast and minimising risk. I think we achieved that and the stage win is proof we had good speed. At different times during the stage I could see some rival trucks in my rearview mirror, but they never came close enough to pass us.”