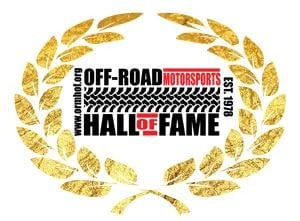 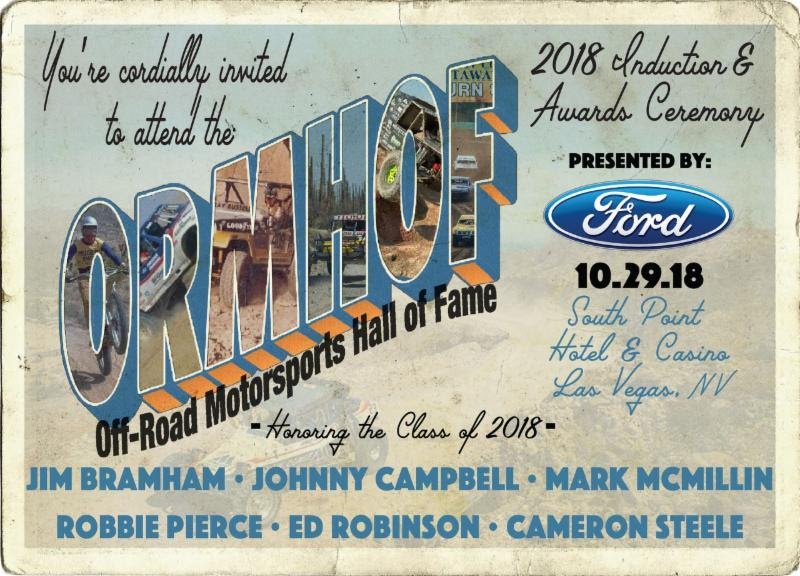 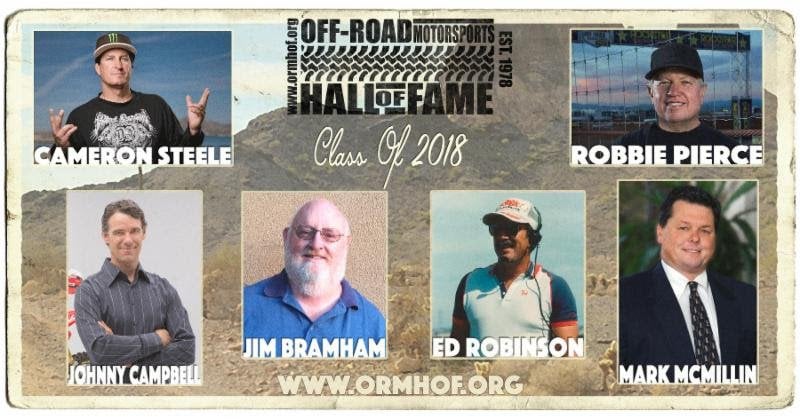 MEET THE CLASS OF 2018
Plus these Hall of Fame Inductees
scheduled to attend:
RICKY JOHNSON AND JIM BEAVER TO HOST
2018 Off-Road Motorsports Hall of Fame
Induction & Awards Ceremony presented by Ford 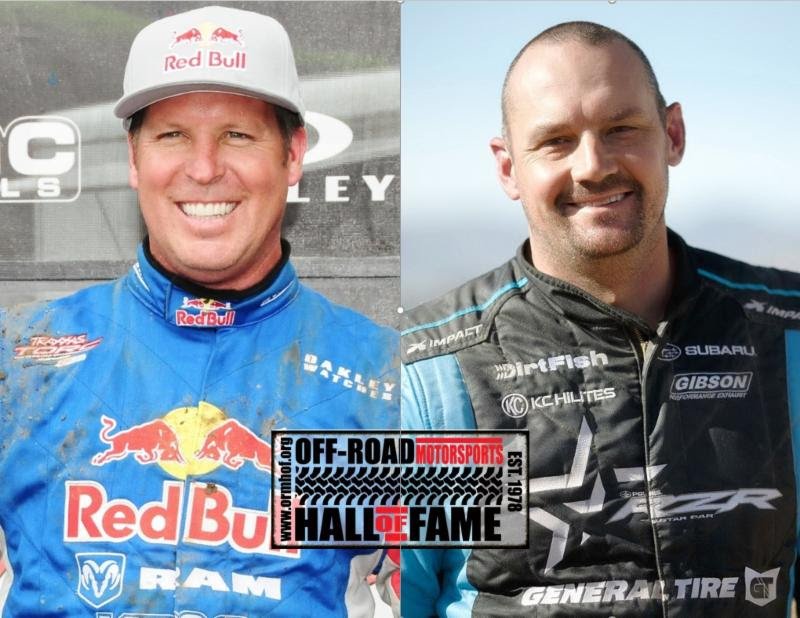 Ricky Johnson and Jim Beaver will host the 2018 Off-Road Motorsports Hall of Fame Induction & Awards Ceremony presented by Ford, on October 29 at the South Point in Las Vegas.   More than 500 guests–a virtual who’s who of off road–including Parnelli Jones, Malcolm Smith, Larry Ragland, Ivan Stewart, Walker Evans, Rob MacCachren, Rod Hall, and more, will be on hand to welcome the ORMHOF Class of 2018: Jim Bramham, Johnny Campbell, Mark McMillin, Robbie Pierce, Ed Robinson, and Cameron Steele.
Ricky Johnson is an inductee of the Motorcycle Hall of Fame of America and AMA Motorcycle Hall of Fame, and is one of the most honored Motocross and Supercross athletes of all time. Moving to off-road, Ricky was the SCORE Rookie of the Year in 1993, and from 1993 to 1995 he won the Baja 500, racing in Class 8. In 1997, Ricky took home his first Baja 1000 victory, winning again in 2003.  Ricky also raced short course, where he won the TORC Series Pro 2 Championship in 2010. In 2012, he won the Pro 4×4 World Championship and the Crandon World Cup. 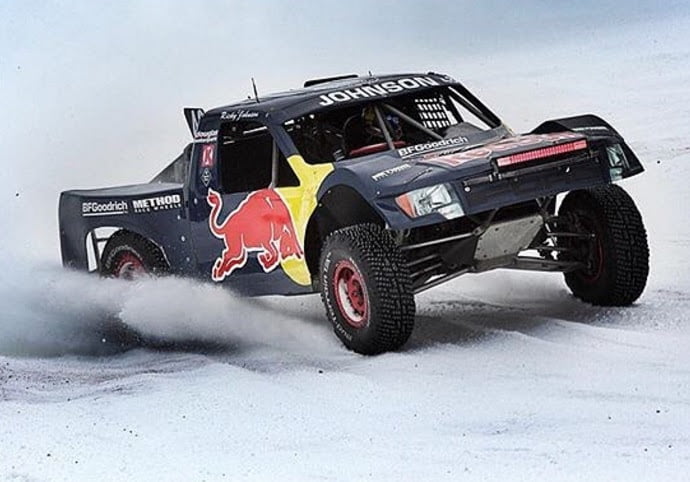 Holding a business and marketing degree, Jim is the mastermind behind
The Down & Dirty Radio Show.
@jimbeaver15
Jim Beaver grew up knee deep in the racing world. He came from a long family line of racing, whether it be on land or water, wheels or not. Jim’s great grandfather Dan was an accomplished horse racer. Jim’s grandfather Marion is a multi time national hydroplane boat racing champion. Jim’s father Dan, is a 30-year veteran of class 8 off road racing. An accomplished racer in his own right, Jim has been a winner in every class he has competed in.
HOST HOTEL AND COCKTAIL PARTY SPONSOR
For the 2018 Induction & Awards Ceremony 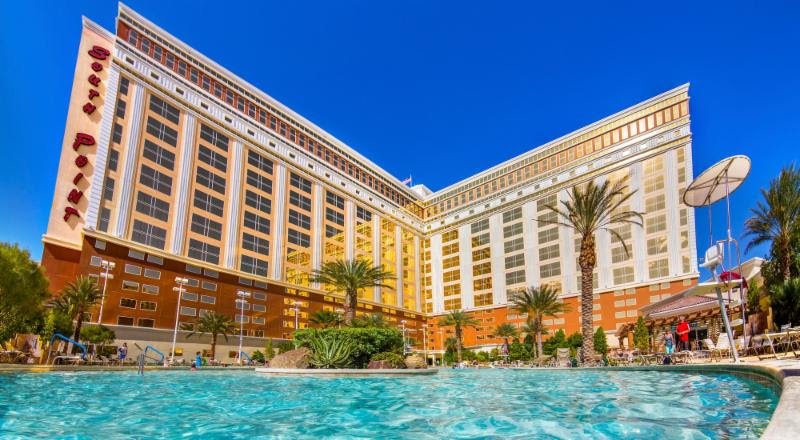 4 WHEEL PARTS PARTY
Following the 2018 Induction & Awards Ceremony
Guests at the 2018 Induction & Awards Ceremony presented by Ford are invited to stay after the Ceremony for the 4 Wheel Parts Party, where they can meet and mingle with past and current inductees, congratulate the recipients of the awards announced during the evening, and put final bids in on their favorite auction items.
NOMINEES ANNOUNCED FOR THE ORMHOF
2018 IMPACT AWARDS PRESENTED BY
GLEN HELEN RACEWAY 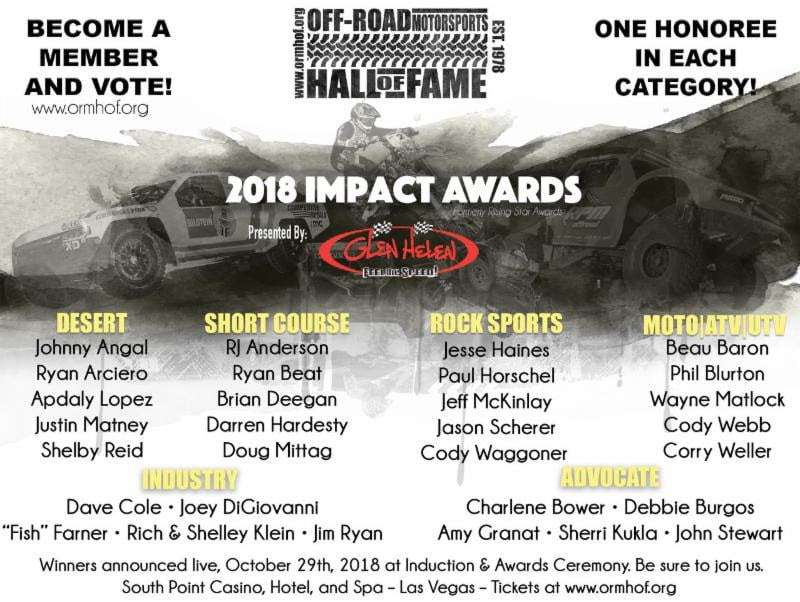 The board of directors of the Off-Road Motorsports Hall of Fame has selected five individuals in each of six categories to be honored as nominees for the 2018 Impact Awards presented by Glen Helen Raceway. The finalists were chosen based on the impact they have made in the sport of off-road over the past twelve months. “This is an exciting time for off-road,” said ORMHOF chairman Mark McMillin, “We had many exceptional candidates to choose from that met the criteria. It was difficult to narrow it down to just five in each category.”
One recipient will be chosen from each category to receive the award, as determined by the voting members of the Hall of Fame, who wil vote by email ballot.  Anyone can join the Hall of Fame as a voting member. The cost is $25. To join go to ormhof.org and use the Donate tab at the top of the home page.
Photos and information about the nominees will be available on the Hall of Fame website  starting October 10. E-mail ballots will be sent out to current voting members starting October 15, with voting open through October 28. Voting is limited to once per email address.  The results will be announced at the Induction & Awards Ceremony presented by Ford on October 29 in Las Vegas. Congratulations to all of the nominees!
P
RDC