This whole thing started about 6 years ago for us.

My nephew is an Army Paratrooper and at the time was in an Airborne unit in Afghanistan. He called me late one night and I don’t think he was having the best day of his life.  To give him some hope and something to look forward to I told him I’m going to look for a VW so that when he gets home we can build a 5/1600 car together.  Well, I found an old bug and when he got home and E.T.S. from the Army, we started to build the car.  I had reached out to Gonzo Racing, another 5/1600 team out of San Diego and befriended them. Over the next 5 years, they answered thousands of questions we had during our build, along with the late Art Savedra, past Score Tech director.  Without these guys, Basecamp Off Road would not exist.  Here in Upstate New York, people have no idea what the Baja 1000 is, let alone even know how to spell Baja!  We didn’t want to buy a car, we really wanted to have a part in building it, so we felt that we earned it.  I can’t really explain this thought process to anyone who doesn’t “get it”.  Whether we succeed or fail, we built this thing from the ground up and took an immense amount of pride doing it.  After a couple of years of researching and building it was time to start forming our team.  Basecamp Off Road was born!  We all live in the Rochester/Finger Lakes region of New York State where we receive a ton of “lake effect” snowfall so this is why our cars paint scheme is “snow camo”. 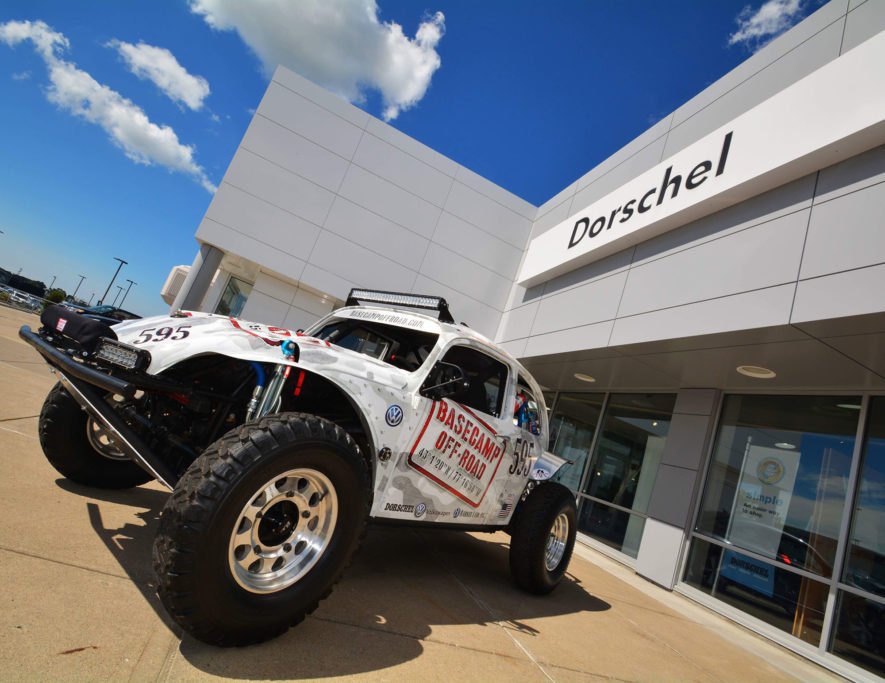 So we got into the country on the Sunday before the 1000.  The team would have loved to go down two weeks early and pre-run but due to our professional jobs we just simply could not.  We’ve already made contact with Score Tech to have our car teched, since it was a new build, we needed the roll cage tag, etc, so we wanted to allow time in case we had to change anything on it. We also had to meet up with Carlos from Baja Pits and give I’m our spare tires for distribution to the designated pits. We had already picked up our sat phones we rented in San Diego before crossing the border. As you know, and anyone who has not raced before, like a bunch of east coast boys from New York, the logistics of doing something like this, especially from 3000 miles away, is almost a year-round job. It was the middle of last January, snowing sideways with two feet of snow coming down and we are ordering adventure insurance to be able to get medivac back to the US for a race in November!  Things like this, contingency planning, take time.  Once our car passed tech, we knew we were actually going to start our first Baja 1000! 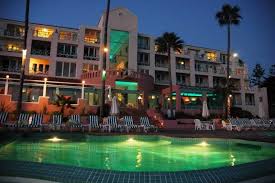 We stayed at La Rosa hotel, just up the hill from downtown, where several other teams were also staying. We met one of the Lawrence Equipment team guys, Ian, and strong-armed him into letting me and my co-driver ride along in his pre-runner for a couple of hours the next morning.  Me being me, I might have made comments about our 5/1600 car passing their Trophy Truck on Race day, and the fact that we would stop and help them because they let us pre-run with them…  something along these lines!  We all had a good laugh.  Contingency was next for us.  For me, being the FNG, I really enjoyed contingency!  I know a lot of teams and drivers you’ll hear a gripe about contingency but I really enjoyed it.  I remember hearing Cameron Steele saying you have to get in sync with Baja, and for me, this was a way I could start to form a connection with the Mexican people. We allowed kids and adults to sit in our race car, to push it through contingency with us, and we had a great conversation with many locals on where we were from and our journey to the 1000.  After returning back to Rochester, when we were looking through our photos, the ones that made us smile the most were the ones of people smiling when they were sitting in our car.  This is hard to explain to someone who doesn’t get it, but for that one moment in time, that person forgot about everything bad in this world, and was just happy! 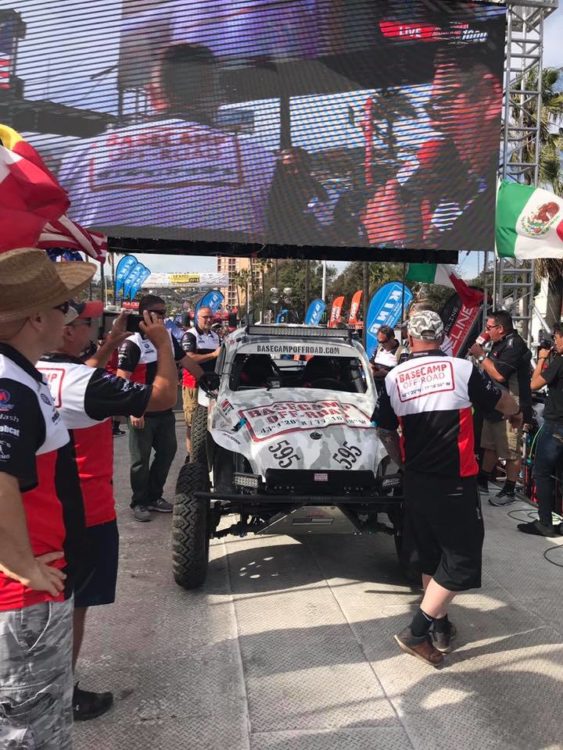 I don’t know, it’s hard to explain, but it made us happy.

Me and my co-driver, Todd Baxter started the race and the plan was for us to drive it halfway and turn the car over to John Bosch and Gary Walker and we did just that, but boy were some bumps along the way!  We flipped the car at race mile 45 while heading up an incline.  We got sucked into a TT rut, which dipped the passenger side into a roll and away we went down the mountain.  Class 11 champs stopped and helped us roll it back over. 1000 thanks to those boys!  We made friends for life, and have since exchanged several emails with them. I can’t wait to settle up with the beer we owe you guys this year!  We picked up our egos off the desert floor and away we went! 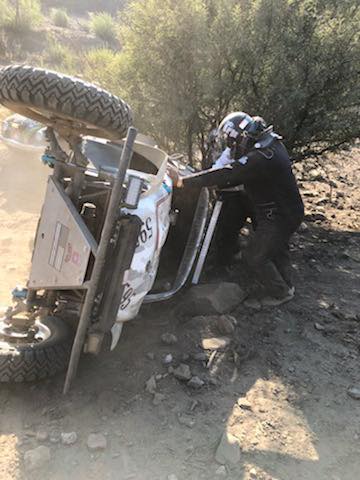 We came down the goat trail and over to San Felipe.  When we got to the Matomi Wash, our motor stopped and from the sound of our electric fuel pump, I could tell why we were out of gas!  When I told my co-driver, Todd, that we’re out of gas, he said how do you know?  I told him by the sound of the fuel pump. At this point, it was getting chilly and we were about 17 miles from the nearest Baja Pits, which with any calculation is still a long walk!

We got on our sat phone and called Marc and Trevor from Gonzo Racing who were kind enough to chase for us on the San Felipe side. 2 and 1/2 hours later they were able to bring us some gas. Baja was winning!  We were getting our butts kicked!  And away we went!  After a few more hours, we stopped at a physical checkpoint near the highway, we were getting back up to speed when my steering wheel came off!

At this point, we were shaking our heads, the bolts just vibrated out!  It probably didn’t help that we didn’t run power steering, which will be our first addition to the car upon returning east.  While stopped alongside the highway, a couple driving a truck pulled up and asked us if we needed help.  I wanted to ask them if they had a trophy truck we could finish the race with but instead asked if they had socket so we could fix our steering wheel.  This couple was from San Diego and they were heading down to Cabo.  Great people, more friends along the way!

Todd and I finally made it to cocos corner and our driver change.  When I got out of our car, I realized that I just had my butt handed to me by one of the most beautiful places I’ve seen, and I honestly loved every freaking minute of it!  John and Gary continued on.  They were trying to make up time due to our downtime for the various above stated events.  A short time later, our good luck streak continued with John and Gary getting stuck in silt bed after silt bed after silt bed as they headed north towards Ensenada.  And away they went. 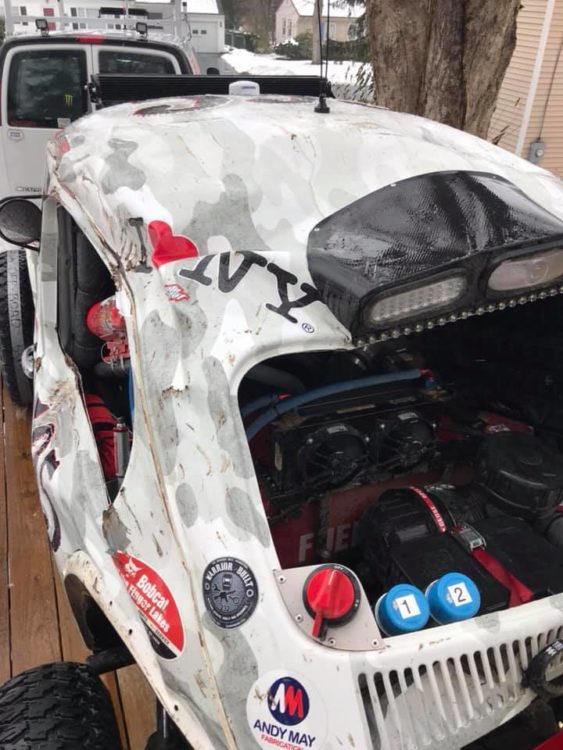 A short while later,  the sat phone was beeping alerting us they were changing a flat. A couple of more flats later and at race mile 535, we were done!  Out of spare tires and with the car having another flat, we formulated a plan to recover our guys and the car.  After driving around 20 plus miles on a flat/rim, our guys and car pulled onto our trailer.  It was a quiet ride back north. We stopped at momma Espinosa’s as we headed back and Robby Gordon came in and ate with us.  It was a great meal!

We arrived back in Ensenada safely but not how we wanted to!  We had to return our stella tracker to the finish line, but I just couldn’t do it.  There is only one way I’m going to that finish line, and I’m not walking to it.  Jeff Belles, one of our chase guys, I think could tell the disappointment on my face, so he kindly volunteered to walk it over and turn it in for us. As we headed for the border with hopes that we would be back next year.

Everyone on the team took a month to decompress a little bit and then I called a dinner meeting. We used this meeting as an AAR (after action review) to discuss what went right, wrong, and things we can do different or better.  We took a vote and it was unanimous, we are coming back this year!  Now it’s time to find a sponsor, fix the car, and the preparation begins.
WOW, great story thanks for sharing ! I wondered what happened, glad you all made it back safe and are still friends ( team mates ) what a great adventure !
Thanks Bob this one kicked our butts,but we plan on going back again this November to get the job done.
Thanks Gary
Hey guys, I saw your car at the 1000, you guys did an awesome job building it. You let my wife sit in it at contingency and it made our day. I hope you guys make it back out here this year. All the best.
Great story, wish you all the best. We love grassroot guys that make it happen.

Awesome Job guys. Baja isn’t for the weak. And you taking on it and now wanting to take on it again is proof you just got injected with the Baja virus that gets in your blood and there is no cure for it ?

Wow! Don’t know you guys, but that is a great story. I have been to Rochester on business, it’s a great area. Your winters are brutal, probably why you guys took up desert racing! Beat Baja this year!
Burt
Give it hell men! East Coast, love it!