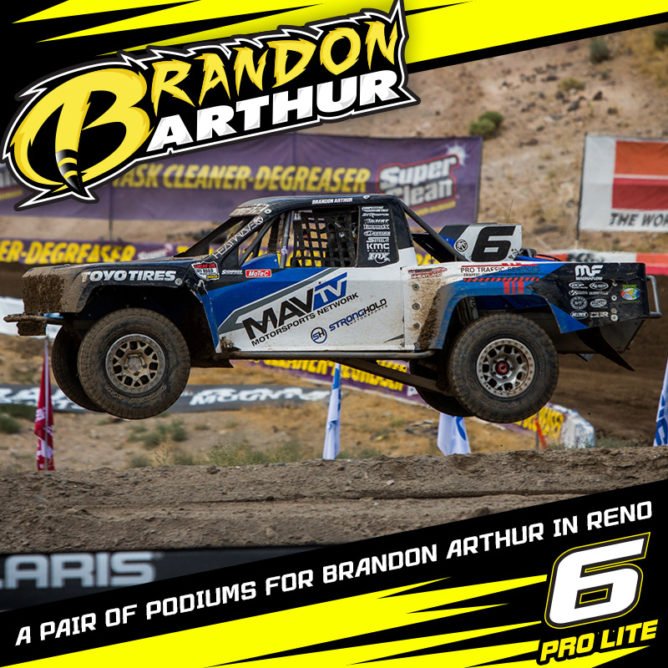 Reno, NV
Brandon Arthur picked up his 8th and 9th podiums of the season in rounds 9 and 10 of the Lucas Oil Off Road Racing Series at Wild West Motorsports Park in Sparks, Nevada. Racing in both the production 1000 UTV class and in his MAVTV, Stronghold Motorsports, Pro Traffic Services, Toyo Tires, Pro Lite, Arthur got a podium in each at Wild West Motorsports Park. His versatility as a driver was on display once more as he jumped back and forth from the UTV to the truck. 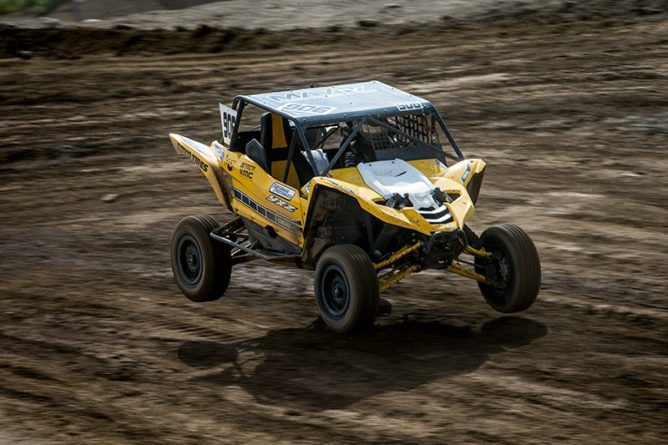 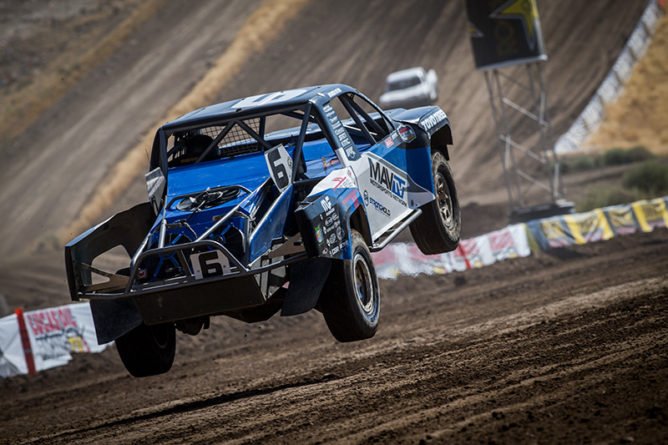 Arthur’s versatility extends off the short course as well. Only a week ago he was competing in the longest offroad race in the United States. The Best In The Desert series, Vegas to Reno race is 539 miles of brutal desert terrain in remote Northern Nevada. He and Brandon Bailey drove their MAVTV / Stronghold Motorsports unlimited class 1500 car to a top 5 finish. Vegas to Reno was an extreme endurance test. 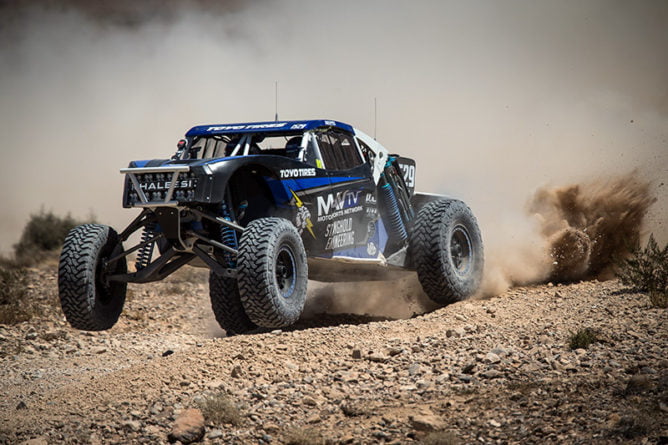 In the Lucas Oil Series, it’s pedal to the metal the whole time. The endurance comes in when racing back to back in the same weekend. Brandon Arthur has proven he can do both. Currently he is sitting in third place in the Pro Lite points championship and second in the Prod 1000 UTV championship standings. 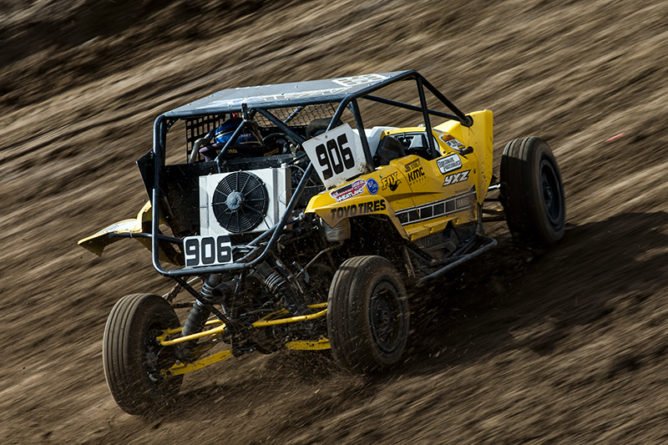 “On Saturday, we had good qualifying runs in each class,” said Arthur, “We missed the race set-up in our Yamaha UTV a little. As the track changed during the race, we got slower. It’s tough when you just don’t have the ability to outrun the competition. In the Pro Lite we had great traction from our Toyo Tires. We finished with a podium but did it the hard way. I was running in third place when I carried too much speed into a corner and spun out. I dropped all the way back to 8th place. The truck was running strong so I set my sights on the front and started picking trucks off. I worked all the way back up to 4th place at the finish. 3rd place was disqualified after the race so we got a podium finish.” 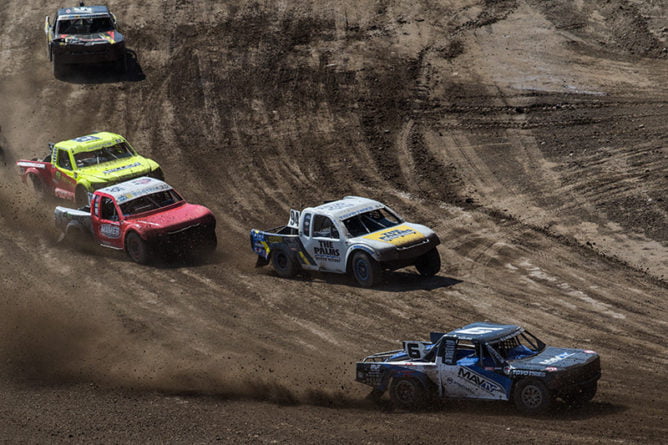 Races on Sunday are typically a lot rougher as racers know they don’t have to repair their cars for the next day’s racing; getting a top starting position is crucial. “The truth is that we just didn’t do well in Pro Lite qualifying, and we started 6th for the race,” Brandon continued, “The contact started immediately. I got pushed wide in turn two and got passed by a couple of guys. We were running 8th. I was pushing hard but just couldn’t push forward. It wasn’t the kind of race we were looking for but it was still a great weekend of racing. We will put our heads down and get ready for Glen Helen.” 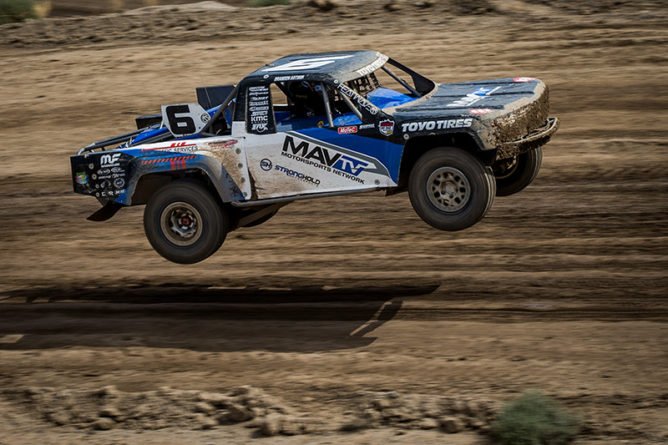 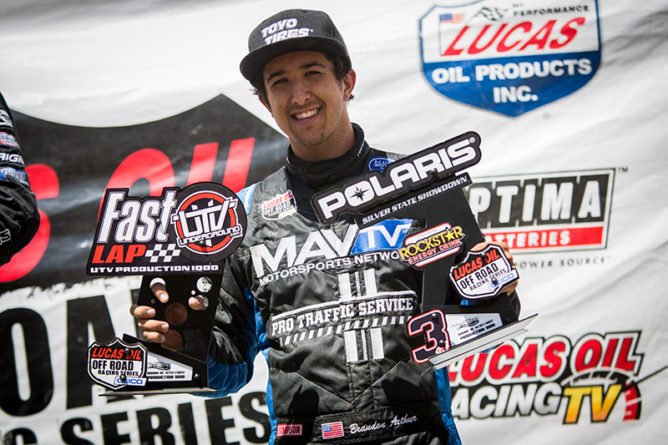 Rounds 11 and 12 will be at Glen Helen in San Bernardino, California on Sep 15 and 16. To keep up on Brandon’s entire racing endeavors go to: http://brandonarthurracing.com/ There you will find the latest news, photos and videos of Brandon’s accomplishments in the Lucas Oil Series and other select off-road events.