OCT. 27, 2016 (Agua Dulce, Calif.): These three talented racers are making final preparations to compete in the 50th Anniversary of the NORRA Mexican 1000; “The Happiest Race On Earth!”. Evan Evans and Andy Blood are sharing the driving duties in Blood’s Brenthel Industries Trophy Truck and Lobsam Yee is completing his own Luxury Pre-runner truck. In addition to the normal race preparations, these three have to make sure their specially engineered trucks will go the distance. 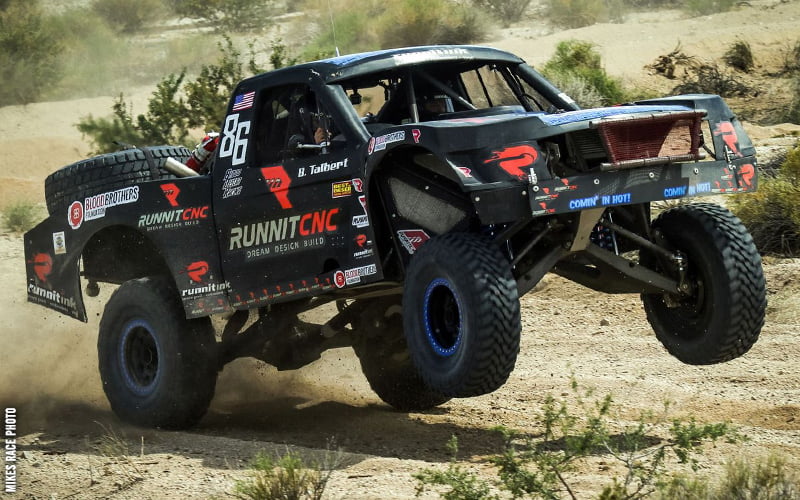 (Above) After injuries sustained during a testing crash, Lobsam Yee (top), has worked up to this point to finish his orange prerunner and have fun in the dirt again. While having different preferences in hand controls, Andy Blood and Evan Evans are teaming up to tackle this years rally and help promote Andy’s “Blood Brothers” foundation for individuals with physical disabilities. Likewise, Lobsam is looking to launch his own foundation.

All three partially disabled drivers will use hand controls to pilot their vehicles. Many know Lobsam Yee from his many accomplishments racing in class 10. He was injured while testing a Trophy Truck. His hand was trapped between the roll cage and body panel during a rollover. Doctors worked to save it, but spores in the soil led to a fungus that began to grow in his bone marrow. The infection led to amputation and a prosthesis on his right arm. During his crash, he landed on the wheels, but the compression was so great that he shattered vertebrae in his back that damaged his spinal cord. Paralyzed from the chest down, his controls are designed so he can accelerate and brake with his right arm; steer and shift with his left. Wanting to get back in the dirt, Yee first tried driving a UTV. After driving the UTV with no pain or side effects, he decided to complete the pre-runner he was building in his shop and go racing with NORRA.

“I decided this year I would finish the prerunner and have some fun,” says Yee, “We got the plans from Craig Stewart and built the truck in our shop. We also purchased some of the suspension components from Craig. It has 32” of travel in the rear and 23” in the front. It will have a leather interior, AC, and surround sound. It’s going to be luxurious. We are serious but we also want to have fun. The way the NORRA rally is, I will have time to recover every night if I have to. If I’m not feeling well, someone else can take the wheel.” Yee wants to get back behind the wheel but also launch his own foundation. The goal is to get people back at what they used to do or encourage disabled people who have never raced to get out and try it. For every sponsor that comes on board, He will make a comparable donation to the foundation. 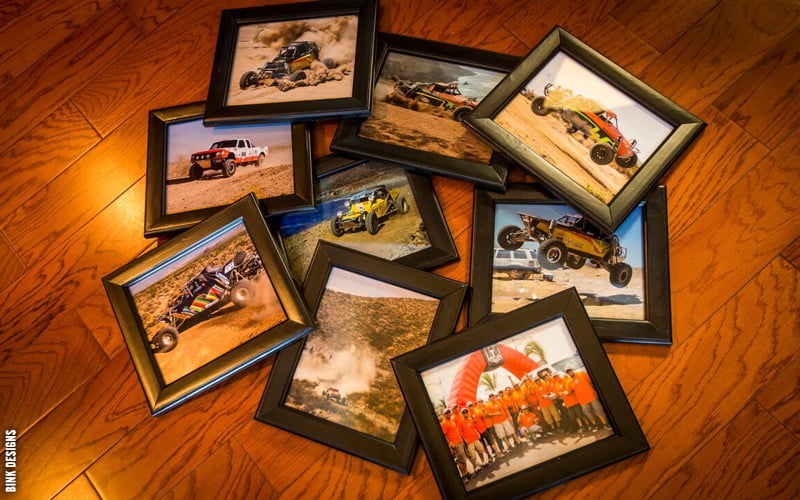 (Above) A collection of Lobsam Yee’s trophies and photos of his race vehicles that span his career up to this point. You may notice, that Lobsam already has a coveted NORRA Mexican 1000 trophy in his possession as well.
Interestingly, Andy Blood has similar goals. In fact, his Blood Brothers foundation works “to transform the lives of individuals living with a physical disability by restoring physical freedom, mobility and independence.” His foundation helps individuals living with physical disabilities by funding vehicle modifications like hand controls, lifts, steering devices and ramps. He also runs a machine shop, Runnit CNC that in addition to general manufacturing designs and builds adaptive equipment for people with disabilities. Runnit CNC’s General Manager Rob Parsons is also in a wheelchair and is a racer; he drives a drift car. Blood was familiar with Evan Evans and how he raced in the desert and on the track with hand controls. He reached out to Evan and the pair decided to team up at NORRA.

“I chased for my Dad last year,” said Evans,” Anytime you get to go to Mexico is good time; NORRA is a blast.” When asked how it will be racing in the desert against his father Walker, Evan said he would rather race with him, but that even if his Dad was 100 years old, he would never give up the driver’s seat. Evan Evans as you may know is no stranger to off road racing either, shown here drifting through a turn via specialized hand controls in his short course truck.

For everything they have in common, Blood and Evans have different styles of hand controls that they are comfortable with. Evans likes a motorcycle style with a twist throttle and brake lever mounted to the shifter. Blood likes a more conventional set-up. The trophy truck might show up with dual controls.

These three racers are not letting anything get in their way and something tells me there might be a side-bet between them as to which one is the fastest at NORRA. Their determination will be a constant source of inspiration to their fellow competitors. How about you? If you’ve thought about racing the Mexican 1000 but have not done it, there is no better time than this year’s 50th anniversary race. The NORRA Mexican 1000 honors the past while also forging the future. The race is loaded with fun, adventure and stiff competition. NORRA is the place where memories and friendships are made that last a lifetime. Come join us April 21-27 for the most unique and rewarding experience on Earth. See details below and go to www.norra.com for complete information about racing the Mexican 1000.