On Saturday, 4 January, in Jeddah – one of the largest cities in the kingdom of Saudi Arabia, more than three hundred and fifty racers, who will perform in five scoring categories of the DAKAR 2020 international rally marathon, passed all the pre-start procedures: preliminary and final technical inspections, as well as administrative checks.

Due to the large number of participants, the main inspections of technical vehicles, press cars that journalists use with the right to go to the racing track, sports cars, all-terrain vehicles, quads and motorcycles were carried out in December 2019 in Marseille, before loading onto a ferry that delivered a caravan of equipment to the Islamic port of Jeddah in Saudi Arabia.

The final technical inspection and administrative checks took place immediately before the race ceremonial start in the Prince Abdullah al-Faisal Stadium. Technical commissioners weighed the vehicles, checked the equipment of the racers, as well as the correct installation and operability of all the necessary navigation devices.

The ceremonial start of the DAKAR 2020 rally will begin on 4 January at 16:00 local time and will last until midnight! On Sunday morning, the racers will begin to pass the first kilometers of the legendary marathon racing distance.

Participants will tackle 12 stages, separated by a day of rest. The total length of the DAKAR rally distance is 7,900 kilometers, while more than five thousand kilometers are competitive ones.

The crews supported by Gazpromneft Lubricants are ready for the start.

The Russian Vladimir Vasilyev, representing one of the largest teams of the current DAKAR – X-raid G-Energy, will drive MINI ALL4 Racing with the G-Energy logo on board in the Car standings. The team is the leader of world rally cross country rallies and the main favorite of the starting rally marathon. In addition to Vasilyev, six more experienced and distinguished crews from 10 countries will fight for the highest positions of the race.

The Belarusian team MAZ-SPORTauto crews will perform for the G-Energy Team in the Truck standings. An updated bonneted truck of Sergey Vyazovich and two MAZ cabover trucks, tested by transcontinental marathons, of Alexander Vasilevsky and Alexey Vishnevsky, took part in pre-start tests after completing the technical inspection and administrative checks.

In 2019, Sergey Vyazovich, the Belarusian team leader, headed the intermediate classification of the Silk Way rally for a long time, proving the excellent driving performance of the new MAZ truck. The Belarusian racer starts at the DAKAR 2020 as one of the main favorites of the Truck classification and will fight for the victory.

What participants will find on the first day?

The first special stage, the total distance of which is 433 kilometers, including 319 competitive ones, will immediately pose the most difficult navigation tasks for the DAKAR participants – the race organizers will not give the riders time to build up. The road conditions and the surface of the first day route will constantly change – the stage will begin with mountain canyons and dried river beds, continue with soft sand dunes and high-speed sections on a sandy plateau, and end with sandy impassability.

“We arrived on the night of 3 January and were ready to begin the pre-start tests at seven o’clock in the morning. We spent almost the whole day in the sands, and we also drove along rather narrow mountain tracks. In general, I was satisfied; we tuned the suspension well, and the car behaves well and comfortably. These two days before the start are quite eventful and there is no time for rest: rises are early. Today in the early morning we managed to go through administrative and technical checks together with our entire large team”.

Sergey Vyazovich, International Master of Motorsports of the Republic of Belarus, head of the MAZ-SPORTauto team, crew No. 503 driver,

“The track relief is very special. We have never seen such a stone field, such ridges that we crossed, so many stones. And the sand is very, very soft. A truck is driving along it slowly, but confidently. The sands are not high, but very soft. This is more dangerous in my opinion, because if the truck sticks in such slopes, it has nowhere to go down. When you stick in high sands, you have a descent on one side anyway. Here it’s just mounds and if you get stuck, then it will probably be difficult. But if it is difficult for us, it is difficult for everyone else”. 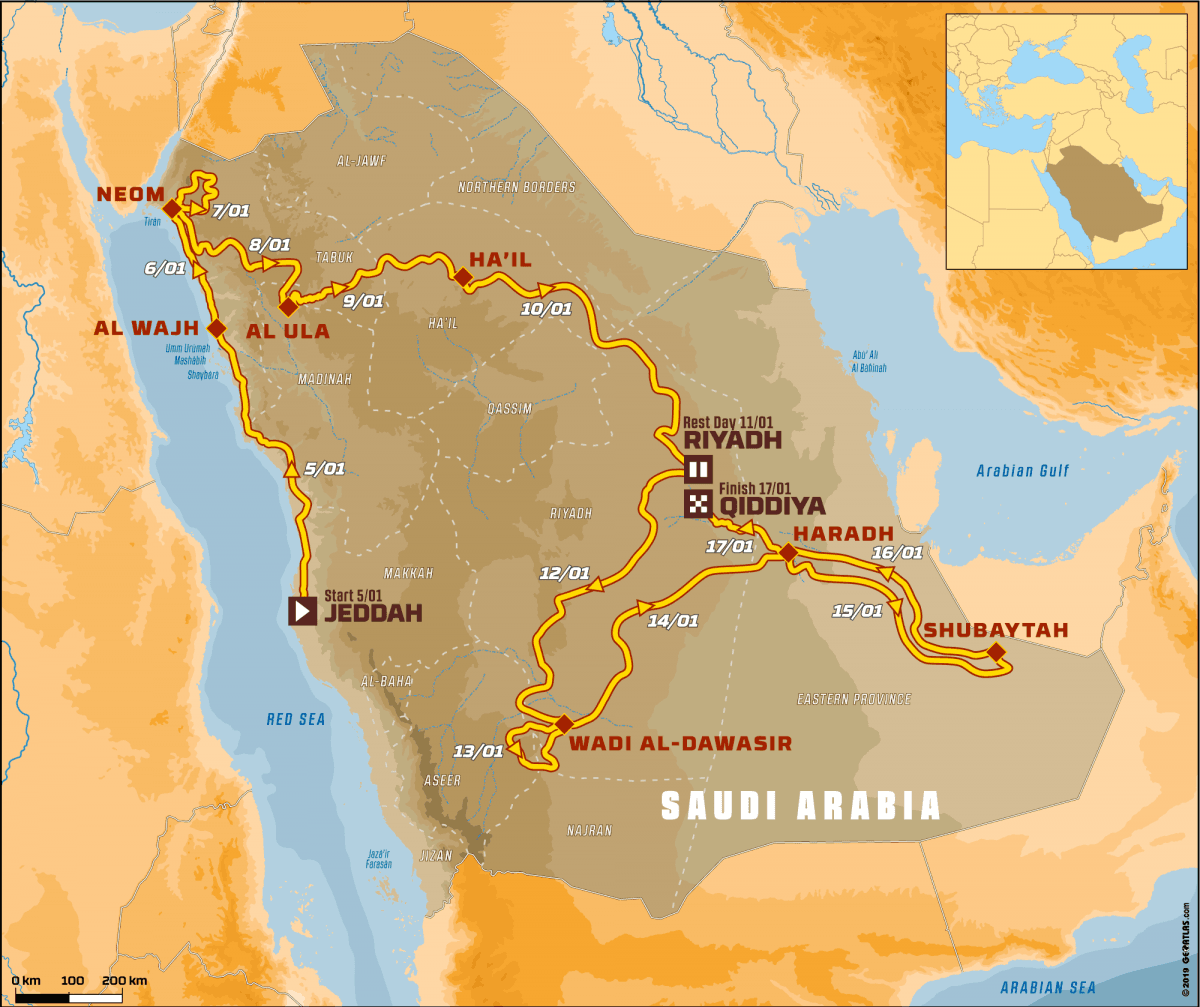 Gazpromneft Lubricants Company (Gazpromneft-SM LLC), a Gazprom Neft subsidiary specializing in the production and sale of oils, lubricants and technical fluids. Is partner of the crews of the MAZ-SPORTauto team and the X-RAID G-Energy Team led by Vladimir Vasilyev and Vitaly Evtekhov.

G-Energy is a premium brand of motor oils from Gazprom Neft, designed for the most modern European, American and Japanese cars. The unique adaptive ACF technology used in the oil allows you to enhance the necessary performance properties depending on the engine operating conditions, activating the necessary additives at the right time. Products are manufactured at the Gazpromneft-SM plant in Bari (Italy). Oils are approved by the world’s leading manufacturers (MB, VW, Renault, GM, etc.). In 2013 Gazpromneft-SM was the first company at the Russian market to produce a specialized line of 100% synthetic G-Energy Racing oils, specially designed for professional racing cars and modern sports cars. G-Energy Racing oils provide maximum engine protection against wear, as well as effectively protect its parts from the formation of deposits, maintaining operational properties even at maximum loads typical for racing.

Mobile laboratory is a unique complex that allows to make the rapid oils analysis. It is equipped with three high-tech devices: Fluid Scan IR spectrometer, xSort xRF spectrometer and MiniVisc mini viscometer.
The Fluid Scan IR spectrometer assesses the degree of the working oil degradation compared to a sample of clean product. It measures the additive package relative depletion and the base number reduction, determines the degree of the product contamination with coolant, water, soot; determines the degree of the product nitration, oxidation, sulfation. The measured values ​​of these indicators allow to diagnose the engine systems condition and assess the degree of the product “aging”.
The xSF xSort spectrometer shows the content of metals and abrasive contaminants (atmospheric dust) in samples of operating oil. Metals in oil are products of parts wear, indicating elements of additives.
The viscometer allows to assess the dynamics of changes in the operating oil kinematic viscosity that, in turn, is responsible for ensuring the pressure in the lubrication system and ensuring the required thickness of the oil film on the rubbing, loaded parts. The measured parameters values​​allow to diagnose system failure and engine parts wear, to determine the presence of pollutants, to assess the reserve of the product operational properties.

Gazpromneft – Lubricants (OOO Gazpromneft-SM), a subsidiary of Gazprom Neft, specializing in the production and sale of oils, lubricants and technical fluids. It was created in November 2007. Products are manufactured at 6 sites in Russia, Italy and Serbia. Total production is 600 thousand tons ofhigh-quality oils, lubricants and technical fluids per year. The Omsk Lubricants Plant (OZSM) has the most modern complex in Russia for oils mixing, filling and packaging with a total annual mixing and packing capacity of 300 thousand tons. The system of Gazpromneft – Lubricants management and its production assets complies with the requirements of international standards ISO 9001, ISO 14001, IATF 16949 and OHSAS 18001. The company products consumers are the largest industrial enterprises; the range includes 600 types of oils and lubricants for all market sectors (over 1500 commodity items). The company products have over 330 approvals from leading manufacturers: KAMAZ, BMW, Mercedes-Benz, Volkswagen, Volvo, Renault, General Motors, Cummins, MAN, ZF, Bosch Rexroth, and others. The company also manufactures and sells marine oils. Gazpromneft-SM accounts for 21% of the packaged lubricants market in Russia, and also operates in the CIS and Baltic countries, Europe, Central and Southeast Asia, Africa, South America, etc. The company products are represented in 75 countries of the world.