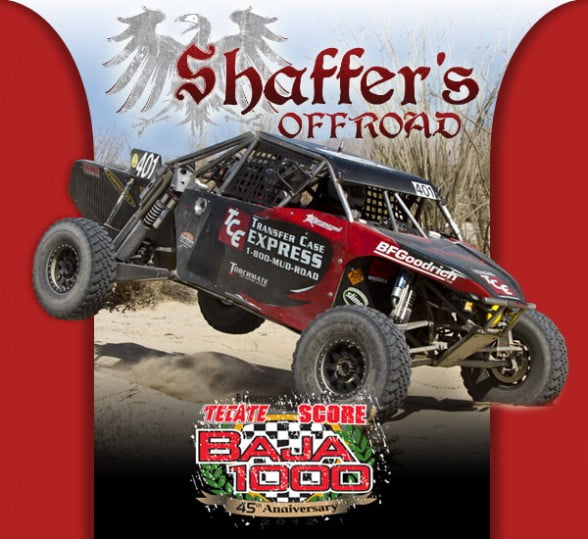 The 45th annual SCORE, Tecate Baja 1000 was an epic undertaking. The race traveled an amazing 1,121.55 miles down the Baja Peninsula. Shaffer Motorsports used teamwork, ingenuity and true grit to complete the entire course in 33 hours and 17 minutes; taking second place and a possible championship. At the time of this writing, the final championship points tally is still underway.

It didn’t look promising for Mike Shaffer before the race. He would drive the first leg and had been ill for days. “I felt good on raceday, at least in the beginning,” Said Mike, “We started behind the 1600 cars and they kick up a lot of mud. We were getting roosted bad as we caught and passed many of them. 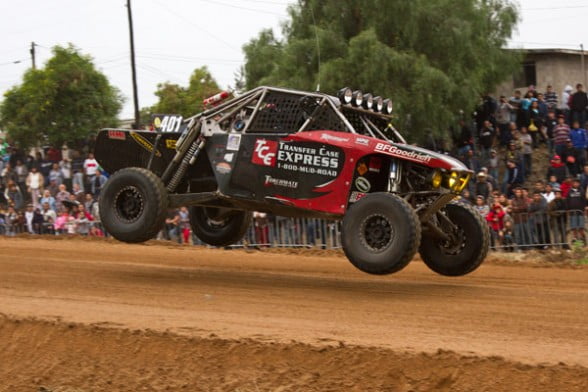 We got passed by the two class 4 cars behind us but as soon as the course got drier around Ojos Negros we got them back.” Mike and Co-rider Sean Abounader had no more issues until they reached San Felipe. They got a flat and then stuck in deep sand losing over an hour. By this time, Mike was not well. He was having a hard time in the big whoops. His whole body ached and the constant pounding was taking a toll. At the driver change, he had to be carried out of the car. 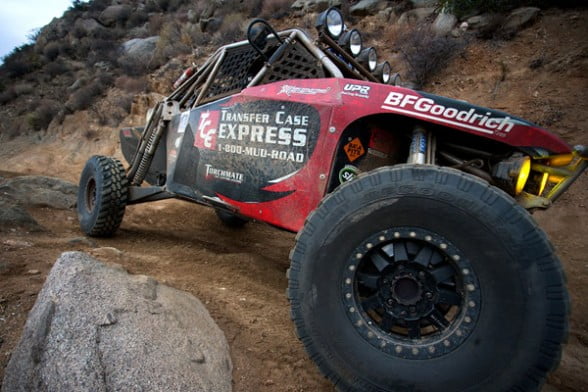 At race mile 349, Driver John Cantrell and Co-rider Eric Strom took over. They settled into a fast pace and had no problems until they reached Bahia de Los Angeles. They were in thick dust when they slowed for a danger zone marked on the gps. Unable to see, they went off the side of the course and rolled the car. To make matters worse, they were in an area that was difficult to reach in a chase truck. It would take an agonizing two hours until they got some help getting righted and were back underway.

At race mile 616, it was Driver Daniel Aeberli and his Co-rider Chris Miller who would get in the car. They had several electrical issues including blown fuses that were possibly due to the roll. “Everytime we had a water crossing, we would lose all electrical in the dash and gps” said Aeberli. Continuously fighting blown fuel pump fuses, Aeberli and Miller delivered the car to the next driver change at rm 899.

When Shawn and Ian Twitchell got in at race mile 899, Aeberli told them of the ongoing fuse issues. The decision was made to change out the fuel pump before the car left for the final leg of the race. The new pump solved the electrical issues. When they pulled into BFG pit 8, at race mile 1022, the team realized one of the rear, upper limit strap mounts had torn out of the chassis and the strap was wrapped around the hub. The BFG pit crew quickly repaired it, welding a new tab in place and the car was off again.

The new Mendeola, S5 transaxle was working great and besides some wrinkled body panels the car was solid. Even though it’s a mechanical assembly, some people believe that every car has a soul. It was almost as if the car realized that one way or another, the team was going to finish the race. As they made it to within 50 miles of the finish, things got touchy again. The motor started loading up and missing. “There were a couple of silt beds that almost got us but the car pulled through,” said Shawn. “It was missing badly by the time we made the finish line, but she got us there,” added Ian. The team showed what they were made of, refusing to give up no matter what they were faced with.