Peterhansel, Price and Quintero star on a scorching Dakar Stage 10 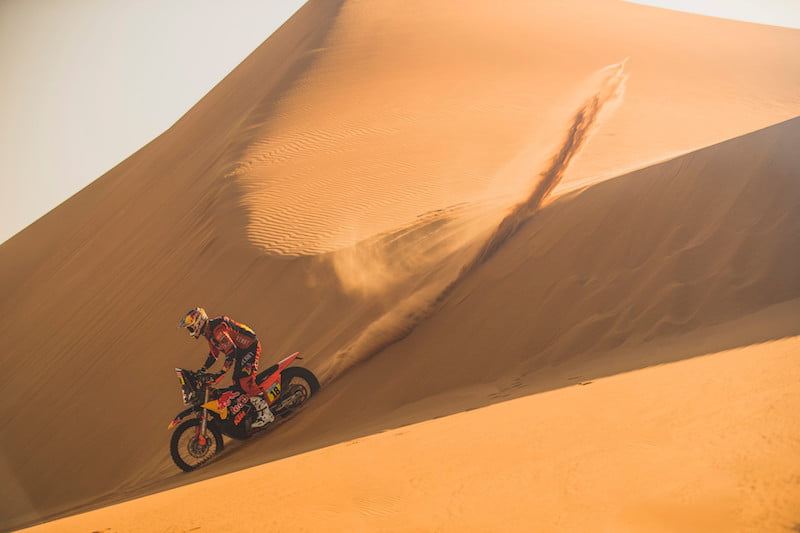 A third stage win for Audi, but Al-Attiyah still leads the cars.

American teenager Seth Quintero made Dakar Rally history as he equalled the record for stage wins in a single Dakar after claiming his 10th T3 stage win during Stage 10 of the race, while Stéphane Peterhansel also claimed his first stage win of this year’s edition. Here is all you need to know:

– Soaring temperatures on Stage 10 of the 2022 Dakar Rally saw the race come to its boiling point as it nears the final straight. With the kilometres running out there’s a sense of ‘now or never’ as race leaders look to defend their gains on the last two days.

– In the cars, Peterhansel grabbed his first stage win of the rally to make it a stage win each for all three Audi Sport drivers at the team’s Dakar debut. ‘Monsieur Dakar’ has placed his Audi RS Q e-tron in the Top 10 on each stage since the Rest Day as a positive second week continues for the winner of 82 Dakar specials. Peterhansel was followed home on the stage by Audi team-mate Carlos Sainz, who finished as the day’s runner-up.

– Race leader Nasser Al-Attiyah was hit by a five-minute penalty for not putting his seatbelt back on quickly enough after fixing a puncture on Stage 8, but the Toyota Gazoo Racing man still has an advantage of over 30 minutes at the front of the race.

– Chasing Al-Attiyah down over every stage is nine-time WRC winner Sébastien Loeb. The Frenchman has been in attack mode for over a week, but the gap to his Qatari rival still stands at 32m40s and unfortunately for Loeb, he now seems to be running out of road.

– In the T3s, it’s mission accomplished for Quintero, as he won his 10th T3 stage of this Dakar. The Red Bull Off-Road Junior Team driver has now tied the record with Pierre Lartigue for the most stage wins in a single Dakar. 19-year-old Quintero now has two more stages to extend the record.

– Quintero was followed in by his team-mate Cristina Gutiérrez, who brought her OT3 to second on the stage. The overall T3 race is still being led by Chaleco Lopez, as it has been since the conclusion of Stage 2.

– In the hotly contested bike class it was all-change again at the top of the standings, as overnight leader Matthias Walkner fell to fifth overall.

– A third Dakar title for Toby Price is looking unlikely this year, but the Red Bull KTM Factory Racing rider reminded everyone of his quality by taking the stage win. Walkner remains the best shot for KTM to win the Dakar for the first time since 2019 however, especially following the withdrawal of 2021 champion Kevin Benavides after a mechanical issue brought his bike to a stop 133km into the 374km timed special stage

– Truck class leader Dmitry Sotnikov extended his advantage with another dominant drive to stage glory, as the Team Kamaz Master driver looks set to make it back-to-back victories at the Dakar. Sotnikov took his lead to over 10 minutes from Kamaz team-mate Eduard Nikolaev.

– Third placed Anton Shibalov and fourth placed Andrey Karginov currently give Team Kamaz Master a 1-2-3-4 at the top of the general classification.

Stéphane Peterhansel: “We haven’t had any big mechanicals since the start of the second week, so we’re making good progress and having fun driving the car. I’m not necessarily a stage hunter, but each Audi driver has now won a stage, and that’s fantastic.”

Nasser Al-Attiyah: “We only lost one minute from Seb today and tomorrow we have a good position on the road. Today we had no punctures or any issues with the car. Mathieu’s navigation was good.”

Sébastien Loeb: “We can’t try any more than we are already doing to catch Nasser. The gap is big, but we’ll do everything we can in these last two days to get as close as we can.

Seth Quintero: “It’s been a wild journey. From the lowest lows to the highest highs, our Dakar has had it all. That’s now win number 10 and my mind is blow. I’m pretty emotional right now and out of words.”

Toby Price: “We’ve still got two days to go and it’s not over until the finish. I’ve so far managed to keep myself healthy so that’s the main thing. We’ll keep trying for the best result we can until the last day.”

Matthias Walkner: “This rally is always a little bit up and down. This morning the guys in the front got lost, so I could catch up some time. Then at the end of the stage, when the sun was so high, I lost some time finding the way.”