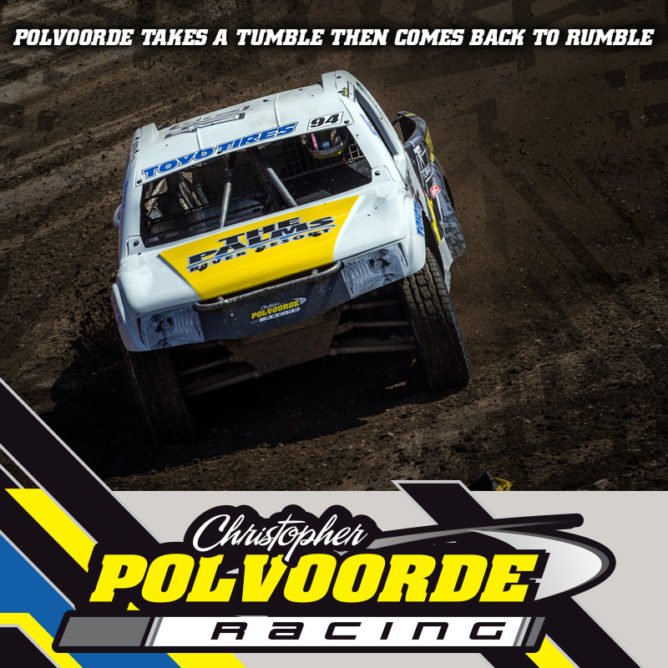 Reno, NV
Rounds 9 and 10 of the Lucas Oil Off Road Racing Series would be the first time Christopher Polvoorde would race at Wild West Motorsports Park in Sparks, Nevada. In a single weekend of racing, he would experience both ends of the spectrum and everything in between. He started on the pole, and stood on the podium. He also crashed. During Saturday’s race, he got kicked sideways in turn 4 at the top of the huge hill that plunges down the front straight. He caught a rut, and rolled his Palms River Resort / Toyo Tires Pro Lite truck. As the truck rolled over and over, he couldn’t help but think he would roll all the way down to the bottom of the hill. Luckily, that wasn’t the case. 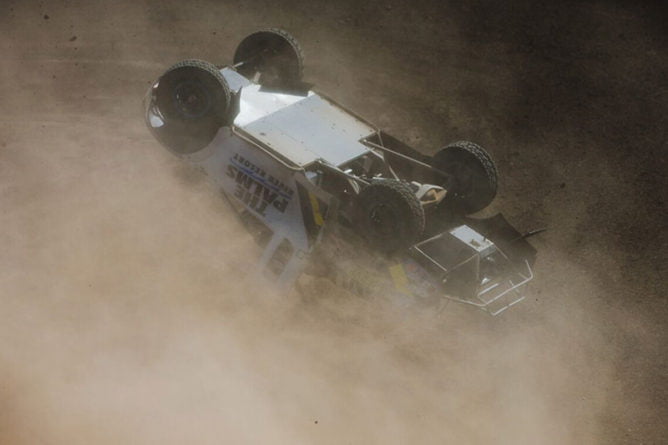 After getting back on his wheels, he ducked into the pits so the crew could inspect the damage. His truck was bent, but not broken. They told him to take it easy and try not to jump it. In what turned out to be a moment the crowd would not forget, Polvoorde was getting every bit of speed down the front straight he could muster in the wounded truck while the race winner was charging towards the checkered flag. If Christopher crossed the line first, he could make another lap and finish on the lead lap. He barely edged out the leader by a fraction of a second, but he made it. He would have to make the loneliest lap a racer can, out on the track by himself, but his determination got him a lead lap finish and a top 10; he finished 8th. 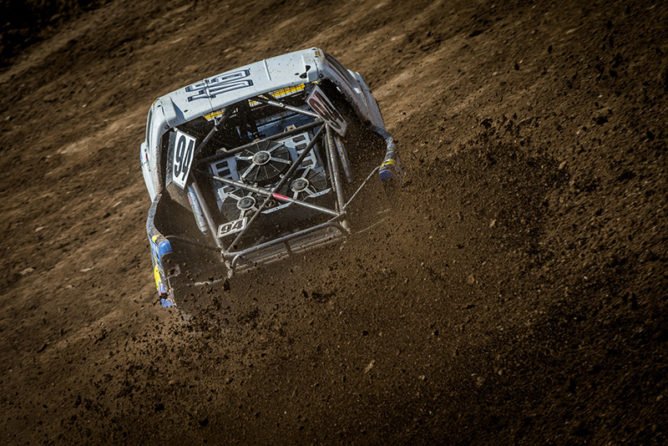 After the race on Saturday concluded, it was time for the Palms River Resort crew to spring into action. “We had a lot of work to do but everyone was pumped up after the exciting finish,” said Polvoorde, “The crew really worked hard to get the truck back in race shape. They were up until 2 A.M. repairing the front and rear suspension. They also had to fix the body damage. They did an amazing job. 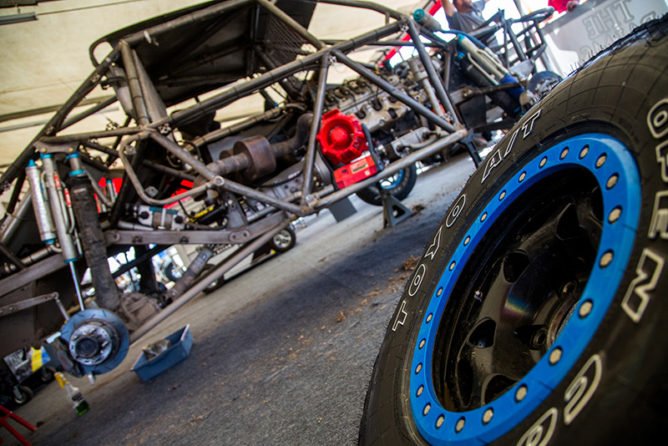 The truck felt really good during the shakedown. During qualifying for Sunday’s race, we took the pole position. It was our first number one qualifying run of the season. When they drew for the inversion, it came up zero so we would start on the pole.” 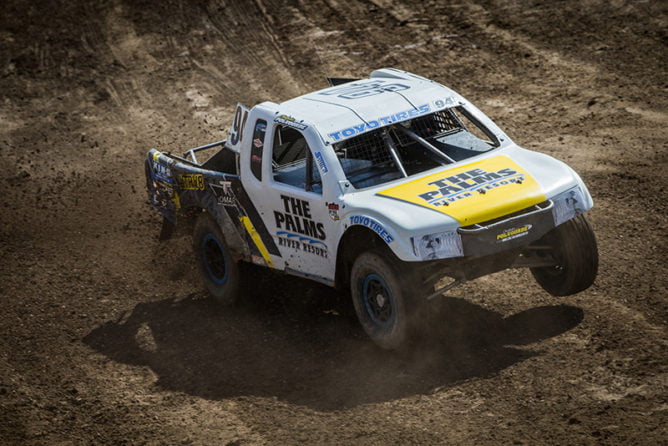 At the drop of the green flag on Sunday, the banging began. By turn 2 on the first lap, Polvoorde had been hit several times and pushed out towards the wall. Drivers usually get more aggressive during the final race of the weekend, but this was ridiculous. 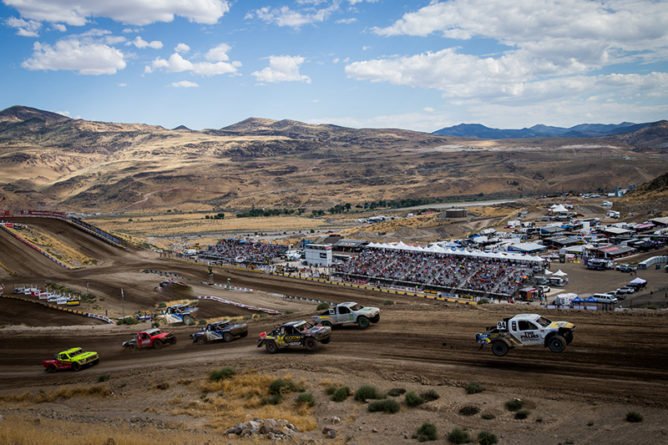 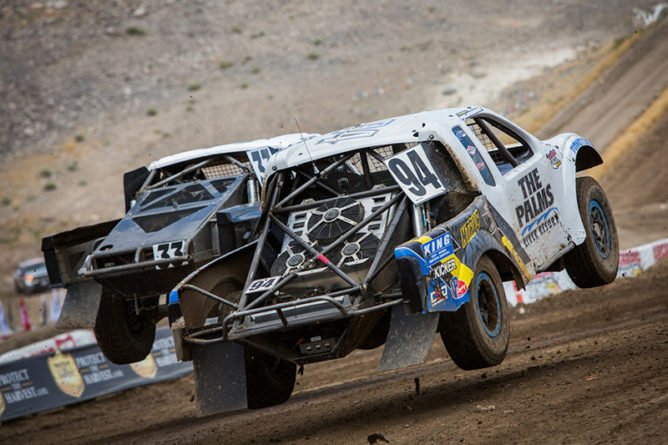 All he wanted to do was drive clean and survive to the finish. After getting pushed back a few positions, Polvoorde realized he would just have to put his head down and charge back to the front. “My hood got damaged and was flapping up in my face,” said Polvoorde, “It was really bad getting through the turn I rolled in on Saturday. 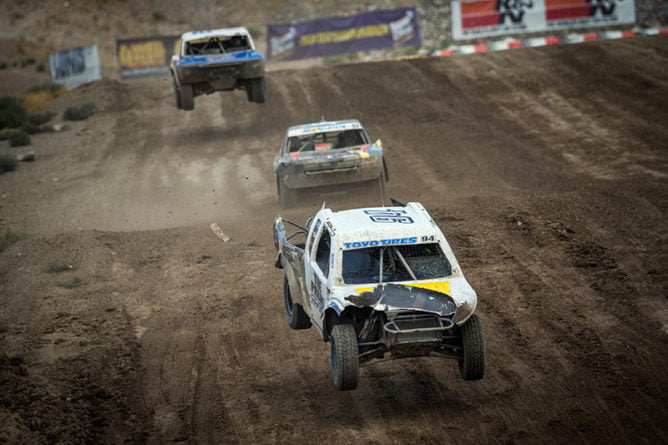 You crest the hill kind of blind and hope you end up where you want to be. It’s a really exciting turn. You look out over the entire track and drop down the hill with the grandstands filled with fans below you. I had a tight battle with Ronnie Anderson for 4th place. We were door to door for a couple laps until I made the pass stick. The rear suspension felt strange but I had to put it out of my mind and push through it. I finished on the podium in 3rd. We overcame a lot in Reno and I am really proud of our whole team. I think we put on a great show for the fans and couldn’t do it without our sponsors Palms River Resort, Toyo Tires, King Shocks, Walker Evans Racing, MTRV8, Tomar, Rugged Radios, Fastway Trailer Products, Kicker, STEEL-IT, and CSD Racing Products.” 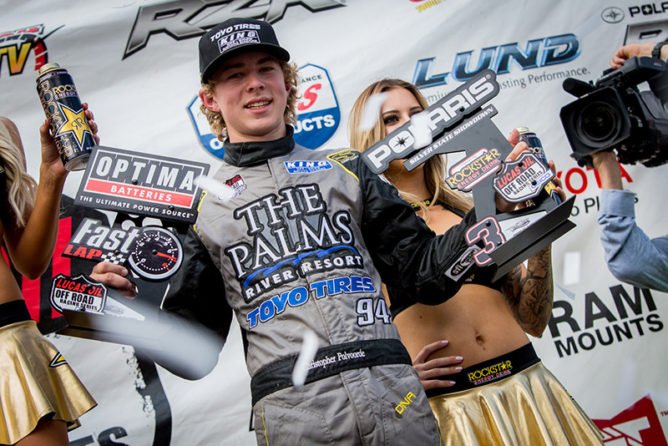 The Palms River Resort Team will be back on the track at Glen Helen in San Bernardino, California for rounds 11 and 12 on Sep 15 and 16. “I can’t wait to race in front of all our friends and family at Glen Helen,” says Christopher, “It’s our home track and we have a lot of laps there; we know it well.”