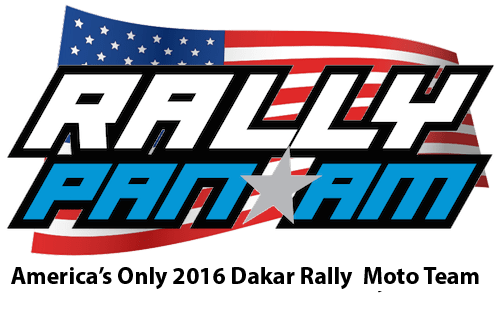 Privateer Dakar Team Ready To Face Off Against Factory Giants

Having shipped their race bikes and support truck to Buenos Aires, the ICO Racing / Rally Pan Am team is focusing on fine details and overcoming a few last minute challenges. The team will race the 2016 Dakar Rally in Argentina and Bolivia in January. The Dakar Rally is the world’s most grueling race, covering 5000 miles over 14 days.

KTM-supported rider, Ian Blythe, who clinched the Brazilian National Enduro Championship earlier this year, is looking forward to his first Dakar. “It’s going to be a real leap into the unknown,” says Blythe, who didn’t spent much time rallying in 2015. Technical problems at the Baja Rally and his focus on the Brazilian Enduro season cut short his rally practice time. Ever easy-going, the 24 year old winner of a 2014 Dakar Challenge prize adds “I guess I’ll learn as we go”.

Teammate Scott Bright, 2014 Baja Rally winner, who suffered a shattered wrist in a shakedown ride in September, is largely recovered, though some complications required a last-minute surgery this week to realign and plate some bones in his arm. Doctors say that he’ll be ready for the start podium on January 2nd.

“I’m expecting very long days and real navigational challenges,” offers Bright, referring to days as long as 931 kilometers. “Perseverance is what gets you to the finish. That’s the goal: to finish.” Bright, who has had a strong, life-long relationship with the younger Blythe, says “We’ll help each other out when we can but there won’t be any sacrifices for one another.”

Team Manager Dave Peckham is aware of the challenges that still face the team. “Rally racing is still a niche sport in America and our team is always struggling to get the financial support needed to compete at the highest level against the factory-funded teams.” He adds “We’re really pleased to have great sponsors like If You See Kay Wines, Motion Pro, Craftsman, Klim, MX1WEST and others. They understand the magnitude of our challenge and with their support we have a great chance at showing the world our potential.”

This will be Rally Pan Am’s 11th Dakar appearance, and the first with these two new pilots. The team has always been one of privateers, void of factory-level sponsorship. Yet the goal is still the same—to put American riders on the podium. Dakar fans will recall impressive results from Jonah Street, the team’s previous Dakar challenger.