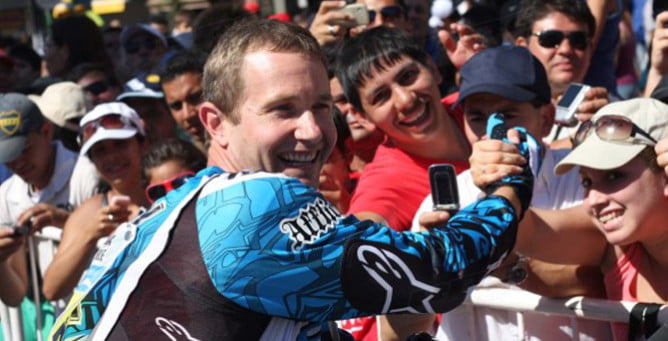 A.S.O. just announced that motorcycle athlete Quinn Cody is now the official Dakar Ambassador. We talked to Quinn and he explained to us his role and A.S.O.’s vision.

If you are in North America and are considering participating in any capacity at the Dakar your first step should be to get in contact with Quinn. He has raced as a navigator and also on a bike at Dakar. He knows what it takes and how to get ready for it. Quinn has experience in most aspects of Dakar and his official A.S.O. job is to help facilitate your next Dakar trip. He knows who exactly to talk to within A.S.O. to get your questions answered, and information and contacts for vehicle transport to and from the race.

One of the big differences between desert racing in America and Dakar is that your navigation is done very differently. Typical races in the US/Mexico are navigated using GPS files of the race course, whereas at Dakar, teams are given Rally Road Books the night before each stage. You then have to study them and most importantly, be able to navigate purely off that book and a compass. Quinn offers a navigation school where he can train you in this aspect of racing.

A.S.O. is once again partnering with SCORE International and if you win certain races, your Dakar entry can be paid in full. For 2015, the SCORE Challenge is limited to 4-wheeled cars only.

Currently the A.S.O. is seeking to include more North American riders and drivers to race the Dakar so the USA showing is more competitive. In recent years, the US team of Robby Gordon Racing has had mixed results but one single top running team is not enough. The competition is tough but not impossible for a team from the US to step up and finally overall the Dakar. If you are interested or have any question regarding Dakar, email Quinn.