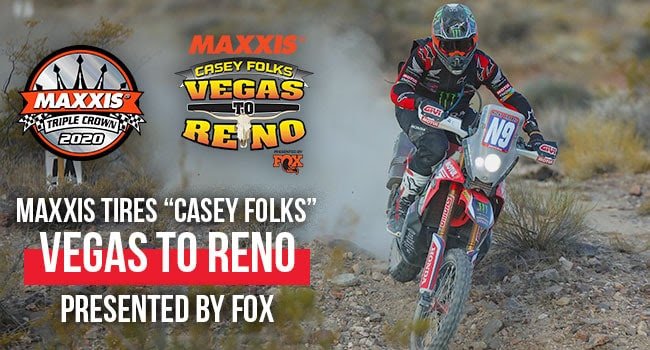 One for the Record Books

One for the Record Books: Off-Road Racing Community, Sponsors, Staff, and Volunteers Come Together to Make History at the 2020 Maxxis Tires “Casey Folks” Vegas to Reno Presented by Fox 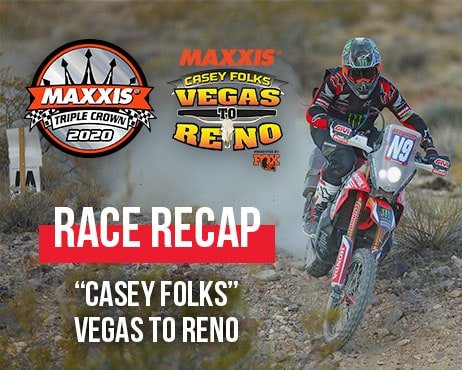 LAS VEGAS, NV (Aug. 17, 2020): As the event drew to a close Saturday morning August 15, and the last competitor crossed the line, the 24th Annual Maxxis Tires Casey Folks “Vegas to Reno” Presented by Fox entered the record books as the largest, best paid, most rewarding, and certainly most challenging Vegas to Reno event ever held. To say that the world right now seems a little crazy would be an understatement. So when a large race that spans the length of a state comes off as smoothly as this year’s event, it is big news.

Best In The Desert held its 24th-annual “longest off-road race in the United States” this past week, and thanks to organizers, sponsors, and respectful attendees, the event went down without issue. Despite being under tight restrictions from the government, a record number of racers turned up to compete and everyone complied with COVID-19 safety protocol including random temperature checks beforehand, wearing masks onsite, and practicing social distancing.

The event is the cornerstone of the Best In The Desert Racing Association Series and was first organized by founder Casey Folks in 1996. Besides being the longest off-road race in the United States and the largest single-day off-road event in North America, it was also recently voted one of the Top 10 Motorsports events in the United States by a USA Today readers poll.

Best In The Desert co-owner and CEO Daryl Folks commented on the work put in to make for a successful event, saying, “If you asked me if I ever imagined the challenges we just faced in putting on an off-road race I would have told you that you were crazy. All I can say is that I am extremely proud of our staff for persevering, our race operations team for never giving up, our volunteers for all their support and sacrifice, and most of all, our racers. Best In The Desert racers and their pit crews are some of the best people I know. They were true heroes rising to the occasion and helping us pull this event off. Somewhere, someplace I know my dad is smiling. My hats off to all.

Best In The Desert co-owner and CMO Bryan Folks agrees, saying, “I just want to echo the sentiment of my brother. Never in all my life would I have imagined the challenges we just faced to host this event. I am extremely grateful to our entire Best In The Desert racing family and especially our staff and volunteers. I also want to thank all our sponsors for sticking with us and for their flexibility and understanding regarding the challenges we just faced. Last but not least, is the off-road racing community. We are so proud to be associated with this group. Their support of Best In The Desert is humbling. This was definitely one for the record books.”

The 2020 Maxxis Tires Casey Folks “Vegas to Reno” Presented by Fox saw a record 394 vehicles turn up to race including 34 Trick Trucks and 38 Class 6100 trucks. 53 UTV Turbo Pros, and a staggering 111 UTVs overall spread across various classes were entered in the race. In fact, entries were up in every class with the motorcycle division showing a huge turn out as well.

The 514-mile point-to-point course saw some new challenges including a new starting area in Amargosa Valley, some completely new sections, and other routes that haven’t been raced in years on the way up to Dayton, Nevada. But that didn’t stop Bryce Menzie from defending his 2019 championship winning overall with a blistering time of 7:48:00, beating Kevin Thompson by approximately 8:45. Luke McMillin, Jason Voss, Andy McMillin, Steve Sourapas, Eric Hustead, Cameron Steele, Rob MacCachren, and Adam Householder rounded out the top 10 for Trick Trucks. Ray Griffith won Class 6100 in 8:46:01, barely 4:35 ahead of Ryan Hancock and Jax Redline who came home third in class.

The UTV Turbo Class was one of the most tightly-contested classes of the day with a little under four minutes separating first place from third. Once again, Can-Am’s Phil Blurton and Beau Judge took the win in a time of 9:52:26 followed by Polaris driver Mitch Guthrie in second place in 9:55:21 and Dustin Jones driving another Can-Am in third at 9:56:11. Polaris driver Seth Quintero once again won the UTV Production class with a time of 10:34:39 followed by Kolton Hustead and one of our Ironwoman Kristen Matlock. Wes Miller won the UTV Unlimited Class in 10:44:15.

Reigning Dakar Champ Ricky Brabec riding for JCR Honda Racing came home with the overall motorcycle win riding solo with a time of 7:53:54 giving him the second-fastest time overall. Brabec had a tough battle going head-to-head with defending champ Skyler Howes for most of the race. However, Howes crashed hard near the finish, Ricky stopped to assist and unfortunately Skylers day ended, while Nic Garvin, who also put in an incredible solo ride of his own, ended up finishing second place overall. Third overall for Open Pro MC went to Nic Colangeli.

Other notable Class winners include Danny Magdaleno in the Quad Pro Class, Jake Johnson in Class 1500, Jared Teague in Class 1000, and Felicia Webb who led the team in the Women’s MC Class. The closest battle of the day was in Ironman Pro where Jason Alosi beat Zach Myers by a mere 18 seconds.

“I can’t thank the volunteers enough for all their help and support for making this event happen. Especially with the new COVID-19 Mitigation plans,” says Donald Jackson, Best In The Desert Operations Manager. “Without all these wonderful people dedicating their time to the sport we love, this event would not have been possible. They truly are extraordinary people who would do anything to keep the sport of off-road desert racing alive. A huge thank you to the Bureau of Land Management for putting their faith in us to pull off this event in current circumstances.”

As the second race in the Maxxis Tires Triple Crown, there was an additional $67,000 in prize money in addition to regular Best In The Desert purse winnings. Bryce Menzies took home a $25,000 bonus, Ray Griffith got $7,500, Phil Blurton a $7,500 bonus, and Ricky Brabec an additional $3,500. Bonuses in the Maxxis Tires Triple Crown include $40,000 for the Unlimited Car and Truck Class; $11,000 for the Limited Car and Truck Class; $11,000 for the top UTVs and $5,000 for the Pro Motorcycle/Quad Class. This money all comes on top of the normal Best In The Desert payback meaning that over $100,000 was paid out to racers this past weekend making this the richest Vegas to Reno event ever run.

Results will also count towards the year-end Best In The Desert Series Class Championships, Maxxis Triple Crown Championships, and the all-new Adventure Series that started with the recent Silver State 300 and includes the rest of this year’s races.

The 2020 Maxxis Tires Casey Folks “Vegas to Reno” Presented by Fox was a landmark event for Best In The Desert. The event could not have been possible without the help and support of Maxxis Tires and Fox Shox. It is also becoming a shining example of what the off-road racing community is capable of. In the face of hardship, bureaucracy, and a variety of requests, Best In The Desert racers and fans proved that they can rise to the occasion and focus on the sport they love.

Everyone that participated in the 2020 Maxxis Tires Casey Folks “Vegas to Reno” Presented by Fox can look back on it with pride. Best In The Desert staff and sponsors can rest easy knowing that coordination and communication were the best they could be, and racers and fans will always remember meeting in the desert amidst a global pandemic.

The next event on the Best In The Desert series calendar is the Jagged X National Desert Cup Presented by Quantum Motorsports on Sept 25 -27, 2020.

For a full list of results from the 2020 Maxxis Tires Casey Folks “Vegas to Reno” Presented by Fox, go here.