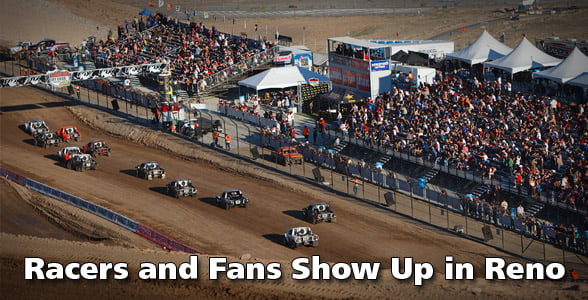 Short Course offroad racing is now officially here in Reno and it looks like its here to stay. While crowds were low earlier in the day, once opening ceremonies kicked off the stands were full and stayed that way till after the last race. Crowds would stand and cheer, crowd the podium after a win, and the overall vibe was that short course racing will be here for a while. The only complaint seemed to be the amount of downtime in between races. At one point right before the prolite race a decision was made to cutdown a jump on the front stretch after both Kyle Leduc and Mike Porter injured their backs on hard landings.

The pressure was on the racers to deliver an exciting show and they didn’t disappoint. All races had great back and forth battles, with leads being changed from lap to lap, some even decided on the last lap.

The Pro 2 race saw Marty Hart take the win, after passing Greg Adler on the last lap to grab some much needed points towards the year end points championship. Brian Deegan finished back in the back after suffering mechanical problems forcing him to go into the hot pits, and Rob MacCachren got an uncommon DNF after going wide and hitting a krail on the last turn, ripping the axle out of the truck and damaging the rear suspension. Another casualty of war was Rodrigo Ampudia who ended up on a tow truck after ripping off parts of his front suspension. Carl Renezeder, who after a tire issue in tech inspection forced him to start in the back, battled his way to a forth position.

Casey Currie not only won prolite, but also won the award for most animated celebration. Currie wears his heart on his sleeve and when he wins he lets the crowd know how excited he is. After starting on the pole, Currie hammered down and while Monster teammate RJ Anderson put on the pressure and came very close to passing him, Currie never let him by and finished on top. Anderson would end up second with Bradley Morris rounding out the top 3.

In the Pro 4 race Kyle Leduc went back to his winning ways extending his points lead. After the race Kyle got checked out by track doctors after injuring his back, but after being looked over he was sent back to his pit where he’ll rest up for tomorrow. With everyone talking about Kyle Leduc winning the majority of races this year, and new guy Eric Barron nipping at his toes, who’s the only driver to miss the podium once all year in Pro 4? Todd Leduc. Finishing third today, Todd is showing everyone that he is a powerhouse at Pro 4.

Jason Zindroski
Nice Job!! You really got some great shots. This track looks awesome, I love all the elevation change. Looks like it really gave you some great angles to shoot from. Looking forward for more today.