Putting yourself out there as a driver you have to come to terms that some things are just out of your control, and yesterday racers got a taste of that. A quick early morning shower foreshadowed what was to come later in the day as while teams were staging to head out to the first practice session of the day, mother nature let loose a short but powerful rain storm. A flooded track meant practice was canceled but there were hopes that qualifying would still be possible, but LOORRS officials made the call to let the track dry out rather then send drivers on a muddy track to qualify and risk damaging the course. 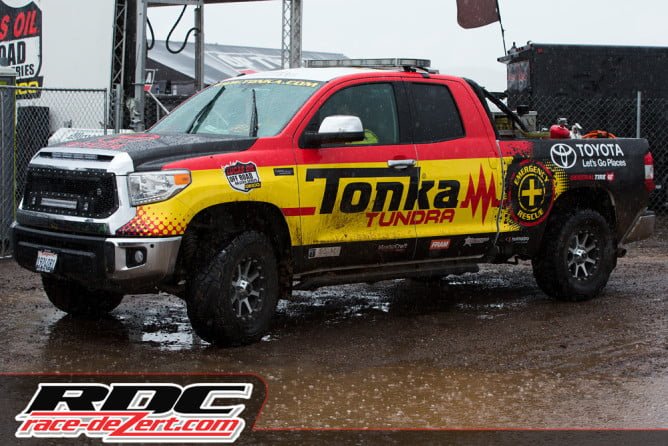 Instead the dirt had time to dry out as the rain never returned, and the fans in attendance would see what they came for; great racing. For the first time at Wild Horse Pass Raceway the fans would get to see racing at night and the drivers were set to put on a great show for them. 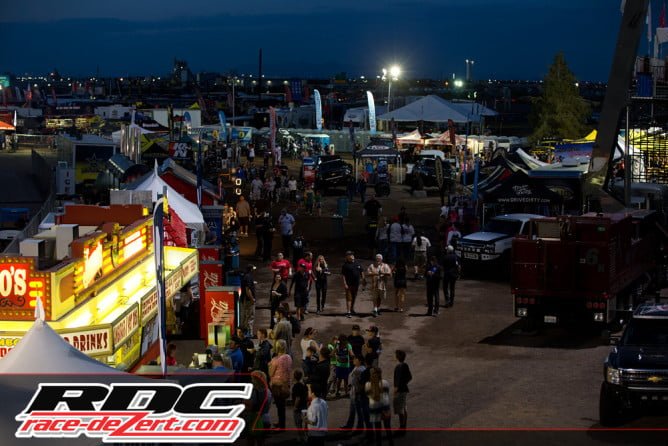 Pro 4 is always an exciting class to watch and last night was no different. Carl Renezeder came out with the early lead and held it for close to half the race but there was a lion behind him waiting to pounce. Kyle Leduc started in the second row and was being very patient but also very calculated, waiting for the right time to strike. On lap 5 when Renezeder and MacCachren both took the low line going into the final turn so Leduc saw his opportunity and took the high line rocketing him past both driver in mid air along the front stretch. 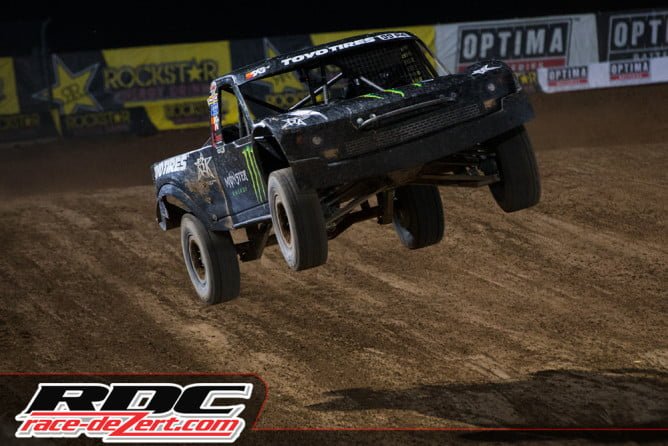 Never looking back Leduc would lead the rest of the race and take home another win. Behind him Renezeder, MacCachren and Bryce Menzies all pushed hard for the final two podium spots, and late in the race Renezeder would get caught up in lapped traffic causing a mechanical problem so it was an all out fight for Menzies and MacCachren with Menzies just getting the upper hand on the last jump before the finish line. 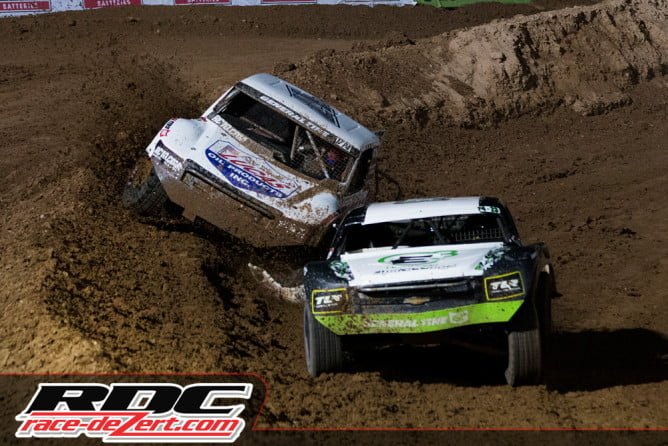 Prolite the question was if Brad DeBerti could repeat the success he had in Lake Elsinore where he dominated both days. DeBerti would get the early lead and started to pull away from the field but RJ Anderson and the rest of the drivers had other plans. Anderson would put a clean pass on DeBerti and take over the lead but a mechanical issue would force Anderson to pull off the track giving DeBerti the lead again. With clean air DeBerti looked to be on his way to another win but young stud Brandon Arthur was right on his back bumper putting the pressure on waiting for his time. Eventually that time would come as DeBerti would make a mistake in turn three giving Arthur just enough room to squeeze by. 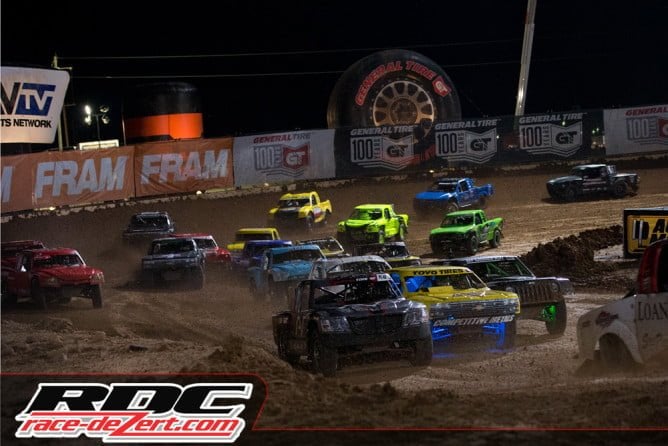 The Chandler crowd rallied behind Arthur wanting the young kid to take home his second career win but a costly mistake on the last lap in which he spun out by himself in turn two would deflate the crowd. Ryan Beat who had battled hard the whole race to move up to second place took over the lead and would cross the finish line with his hand held high. Another crowd favorite Jeremy “Twitch” Stenberg would land his first Prolite podium grabbing third place and Sheldon Creed would take the middle spot. 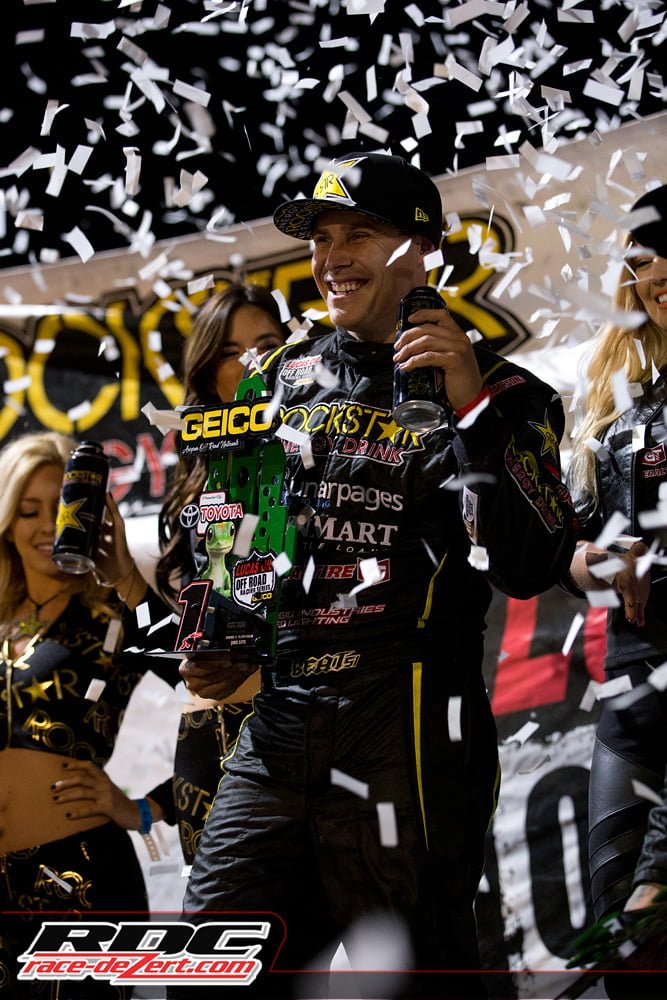 The final race of the night would be Pro 2 and it also had some great battles for the fans in attendance. Bryce Menzies grabbed the early lead and looked to hold it for the whole race but after hitting a pot hole on the track his front suspension had other ideas. After pulling over veteran Rob MacCachren took over the lead and when Rob Mac gets a lead its very hard to pass him. That left the rest of the field to jockey for position behind him and there was plenty of that. Jeremy McGrath and RJ Anderson had a great back and forth battle for second place which ended with Anderson getting off course and hitting a few banners. Renezeder was also charging hard but hit the same hold Menzies did putting him on his lid. With Rob Mac and McGrath running 1-2, Rodrigo Ampudia and returning Brian Deegan fought hard for third and late in the race Deegan who took notes from Kyle Leduc took the high line and shot past Ampudia and McGrath landing his the second spot. 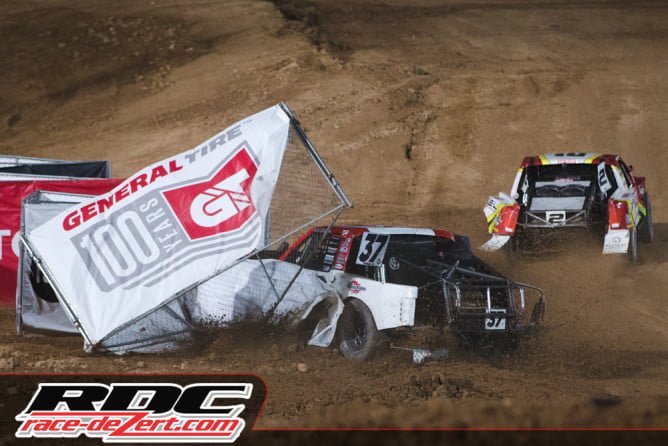 Today racing continues for Round 4 and if the racing was anything like last night you won’t want to miss the action at Wild Horse Pass Raceway.

Jason Zindroski
Are only Pro 2's and Pro 4's racing? Why no results for Pro Buggy? I realize that trucks are the show and crowd favorite but you should give the other classes some love!