It says something about a race when it takes no less than perfection to come out on top. At the 54th SCORE Baja 1000, nothing less than a trouble free race would be needed if you expected to win. Take Bryce Menzies for instance. He did absolutely everything right. He had impeccable preparation on his RedBull Mason Trophy Truck. He came down and preran his section 8 times. He had the perfect game plan for race day, and an equally impressive co-driver with tons of talent in Andy McMillin. The entire team put the maximum amount of pressure on the competition. Bryce started first, and drove the first half of the race, out front, with no drama. Only about 30 miles after Andy got in the truck, the engine went sour, and then quit. Their failure was not from an oversight, or lack of attention. It came down to strength of materials and just bad luck. You can’t win a peninsula run with either. 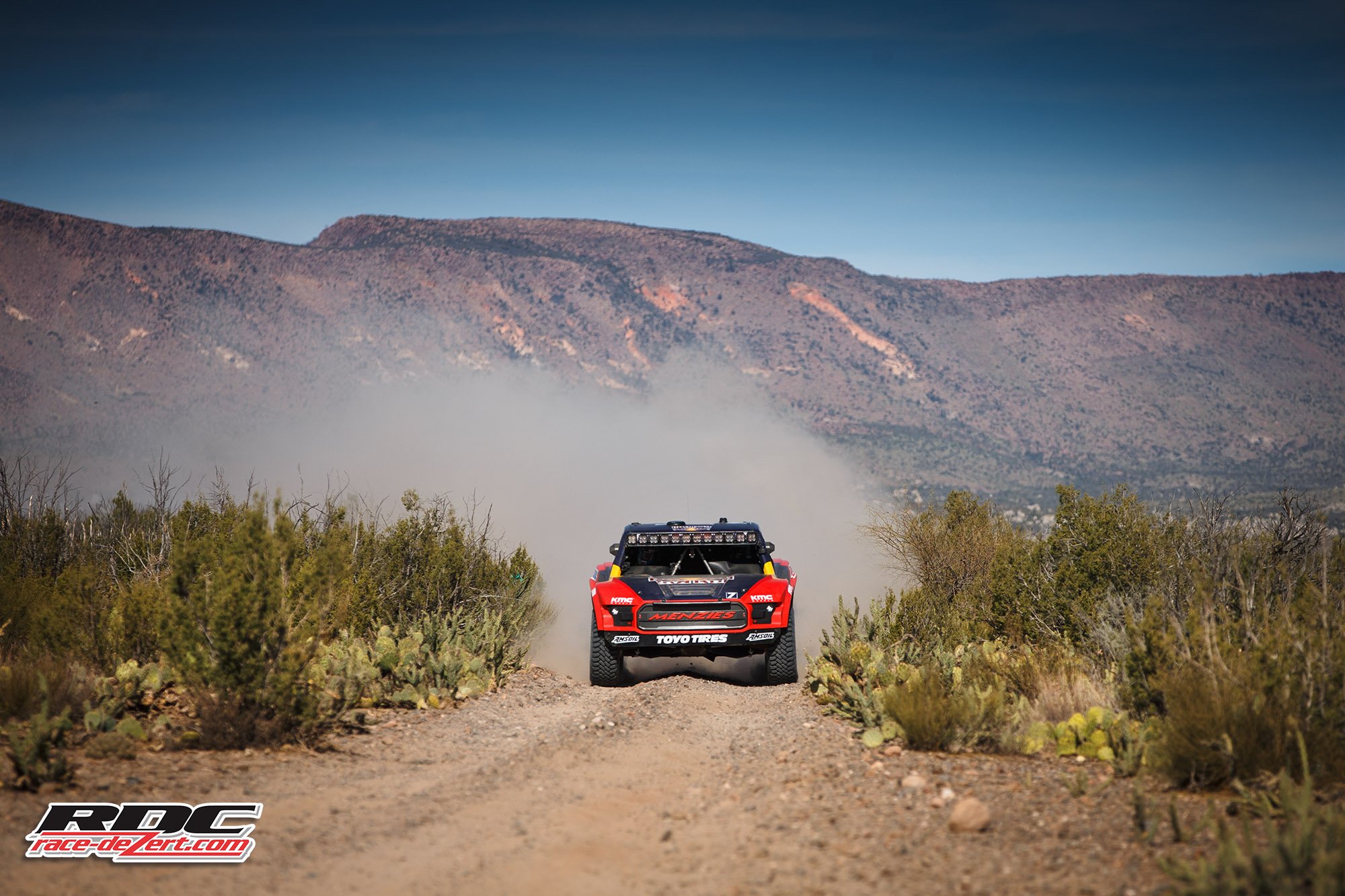 In second place all day had been Rob MacCachren. He was sharing the driving chores with Luke McMillin. It was Luke’s truck, but it carried Rob’s number 11 on the side. They too had a perfect race up until the driver’s change, and it continued on to the finish. Luke got his second straight Baja 1000 win, and Rob earned his fifth overall, and the Trophy Truck Championship; not a bad day’s work. According to Luke, they didn’t even have a flat tire all day. What’s amazing is that they can run that hard, and not have a scratch on the truck. You can say it was good luck, but it was also dedication, skill, and preparation. Similar results were shared by Tavo Vildosola who finished second overall, and Cameron Steele who was third. The bikes demand perfection. You can’t relax for a second. As the miles went by, it soon became clear that the battle would be between the 1x and 5x bikes for the win. The 5x team was racing with only 2 riders, Derek Ausserbauer, and Colton Udall. The 1x team had 4 riders, Mark Samuels, Justin Morgan, Kendall Norman, and Brandon Prieto. Derek Ausserbauer admitted that they were outgunned, especially with Kendall Norman putting down some amazing split times on the way to their win. Who do the riders respect the most? It has to be the ironman riders. I was told once that when you race ironman on a peninsula run, you will experience every human emotion at least once; it’s that incredible. The win went to 725x Juan Carlos Salvatierra, with 741X Justin Moore in second, and 719X Mike Frick third. Every one of the ironman riders deserves mention 744x Darrin Rideout, 720x Robert Longhurst, 792x Jhovani Brito Fontana, 779x Jorge Gamarra, 777X Scott Simas, 733x Paul Hart, 703x Gershom Berg, 728x Jacob Dallas, and 731X Augusto Faure. 99A Miguel Angel Arranz Lopez Zaragoza won Pro Quad ironman, and 77A Francisco J. Villavic finished second.

Everyone sets out to have the perfect day, but then Baja happens. The terrain, the variables, and the competition all conspire to make things go sideways. Luke McMillin’s brother Dan had a similar truck, a good plan, and a great team behind him too, and it all fell apart in a split second. Justin “Bean” Smith would be driving the first half of the race. He was coming up to a washed out section with 2 parallel lines. A bad bounce got him a little crossed up when the truck flew off the first jump. If it had only been a single rut, it would have been no big deal, but when he hit the second rut at a weird angle, it caused the front end to dig into the face, and the truck rolled over. Bean and his co-driver were ok, but the truck was hurt, and he was crushed. All the weight of the world was on him, and there was no way to fix it. It shows how even the best can be shut down in seconds. 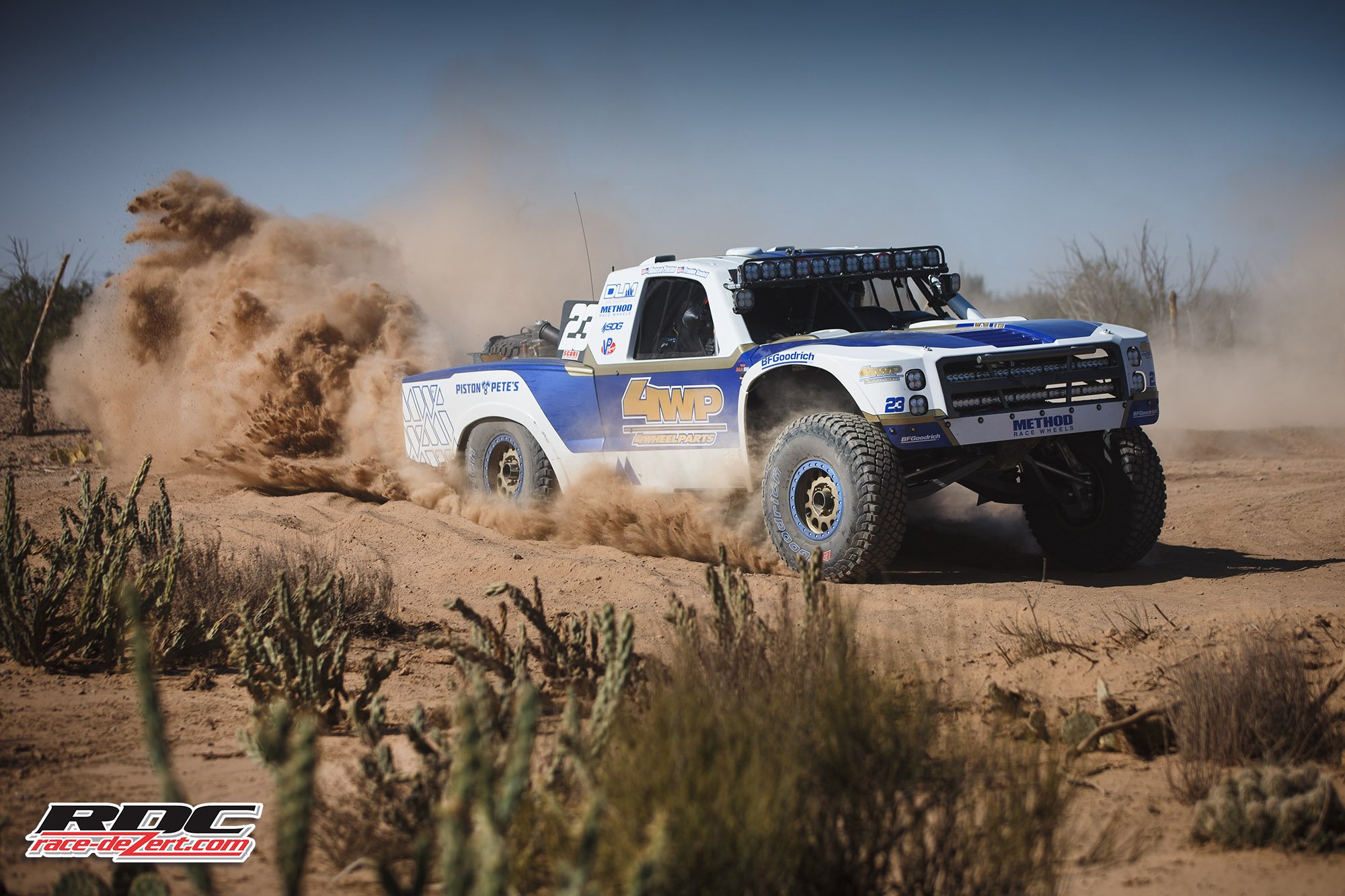 A major part of off road racing is problem solving. Whether it’s in the shop, on the course, or the logistical nightmare that is a peninsula run, countless problems arise that have to be dealt with. Sometimes you can overcome those problems, and go on to win. Other times it’s the end of your race. Ask any desert racer, and they will tell you. The wins are great, but those times when they worked their way out of an impossible situation are the ones you remember the most. When it looks like the end of the world, sometimes the world changes. 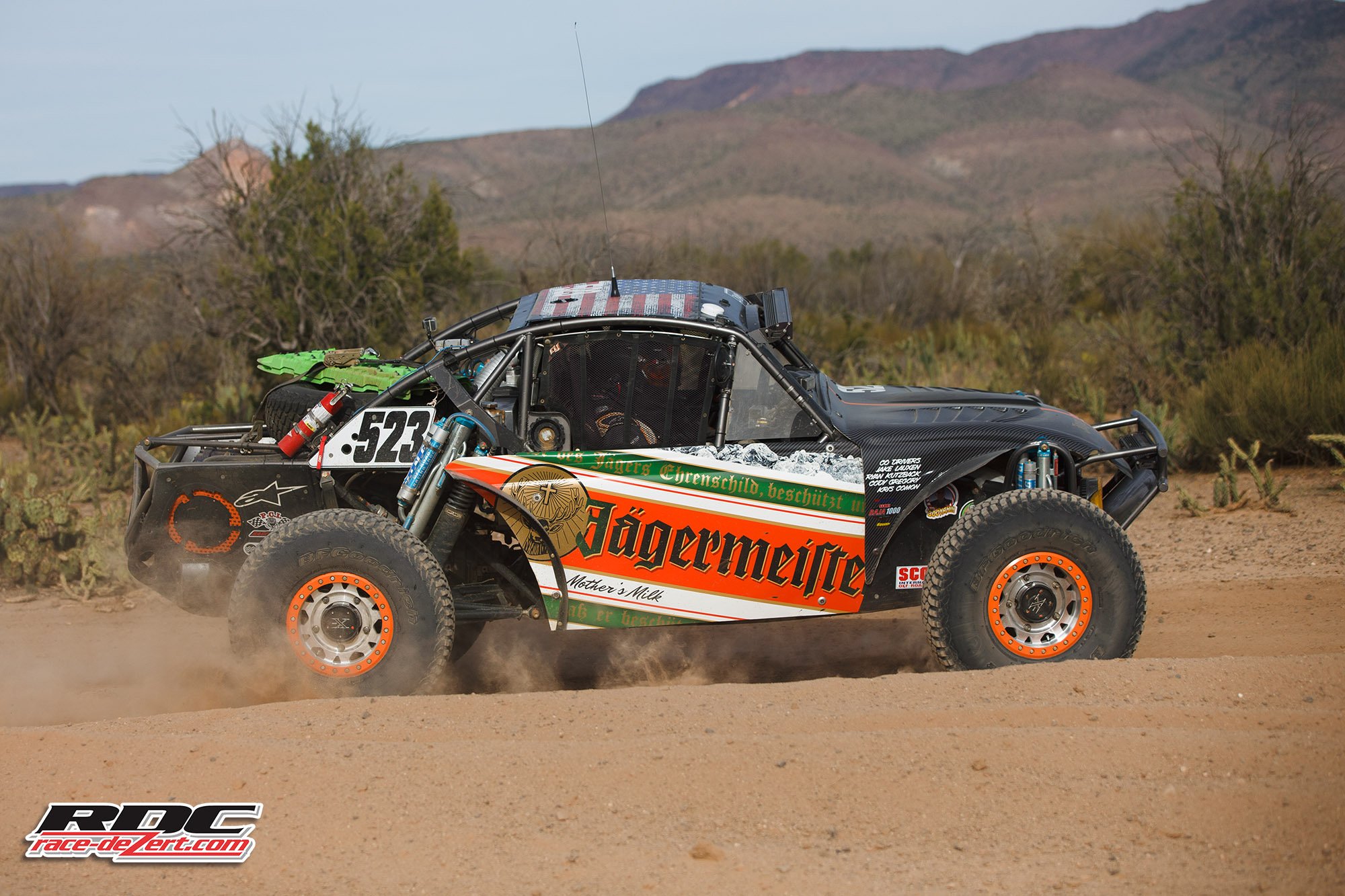 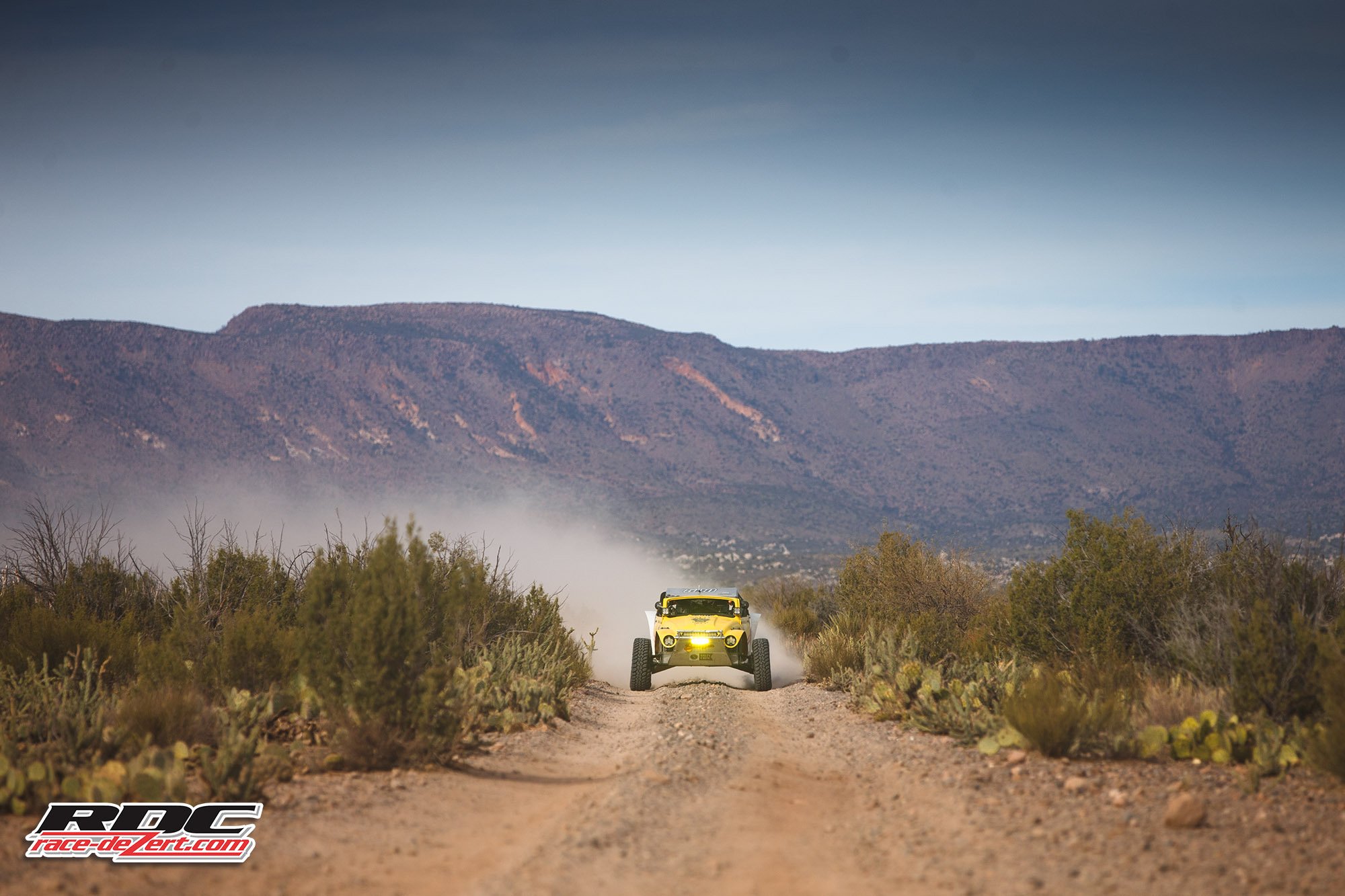 Take for instance the race in class 5. Don Chase, Ben Swift, and Trey Hernquist were all battling for the lead. Swift had a nagging suspension issue that he knew had to be fixed in order to finish the last 200 miles. He reluctantly pulled over to make repairs. It could mean the difference between a podium, and a DNF. He had been going back and forth all day with Hernquist, and had to watch him drive by while they made repairs. Chase was out front, and the probable winner. Swift made the repairs he needed, and headed for the finish. As they reached race mile 1187, they spotted Hernquist on the side of the course. You never know what will happen so you have to just keep trying. You never lose until you quit. Swift finished 2nd, and Hernquist limped to the checkered flag for 3rd. 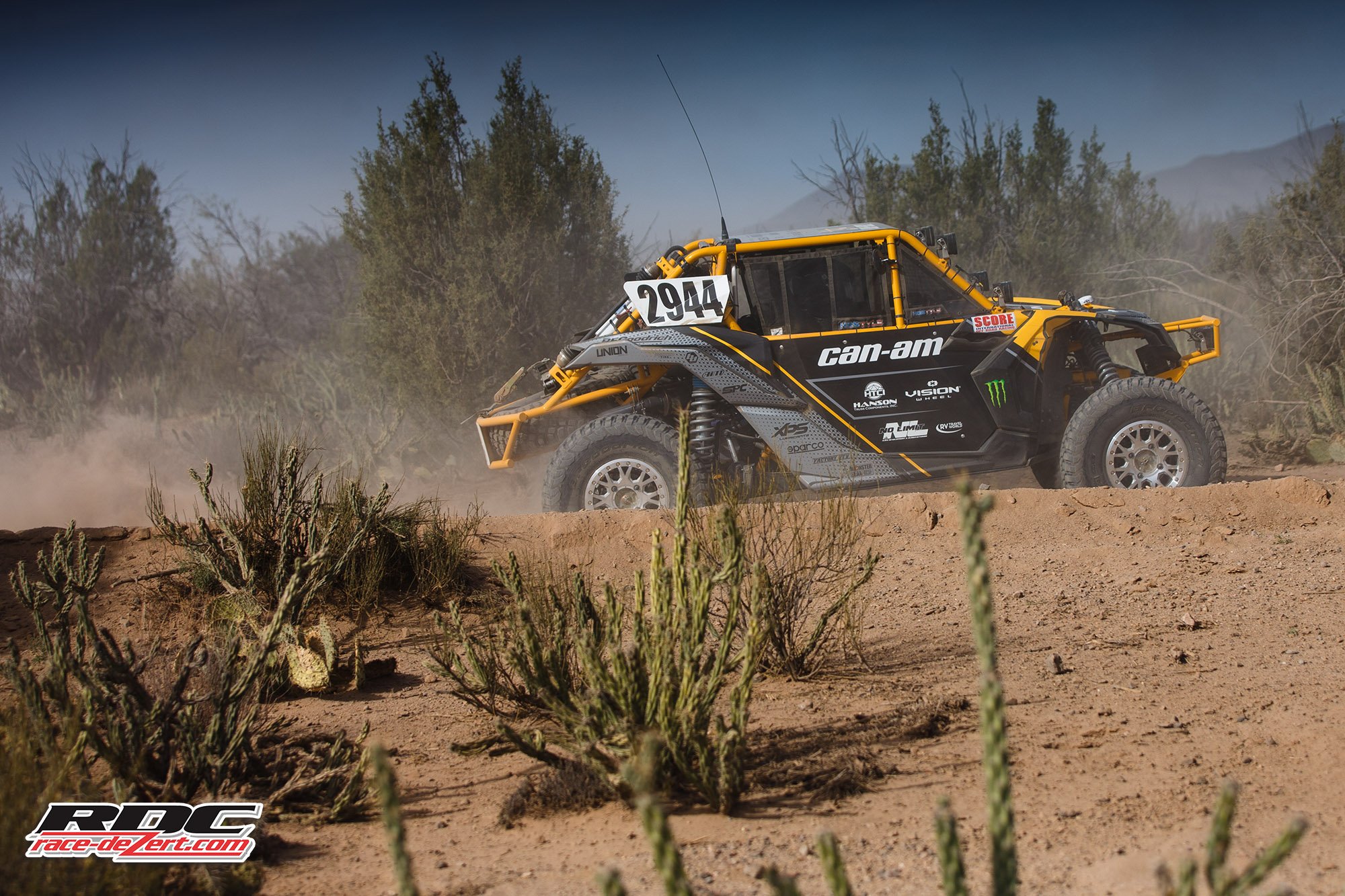 As class winners came into the finish line, those who were lucky had perfect days like Luke, and Rob. Most had persevered and found themselves the best on that day. Wayne Matlock broke 3 shocks during his run down the peninsula in his new Polaris RZR Pro. It looks like his efforts will be rewarded with a third place podium finish. Justin Lambert was the early leader in UTV turbo, but he was sidelined. Phil Blurton outpaced the rest to win. Justin Elenburg got his fourth straight Pro UTV Open win, sweeping the whole season. Tyler Backus finished second. Elenburg was joined by Rolf Helland, and Mike Cafro who also swept the season. 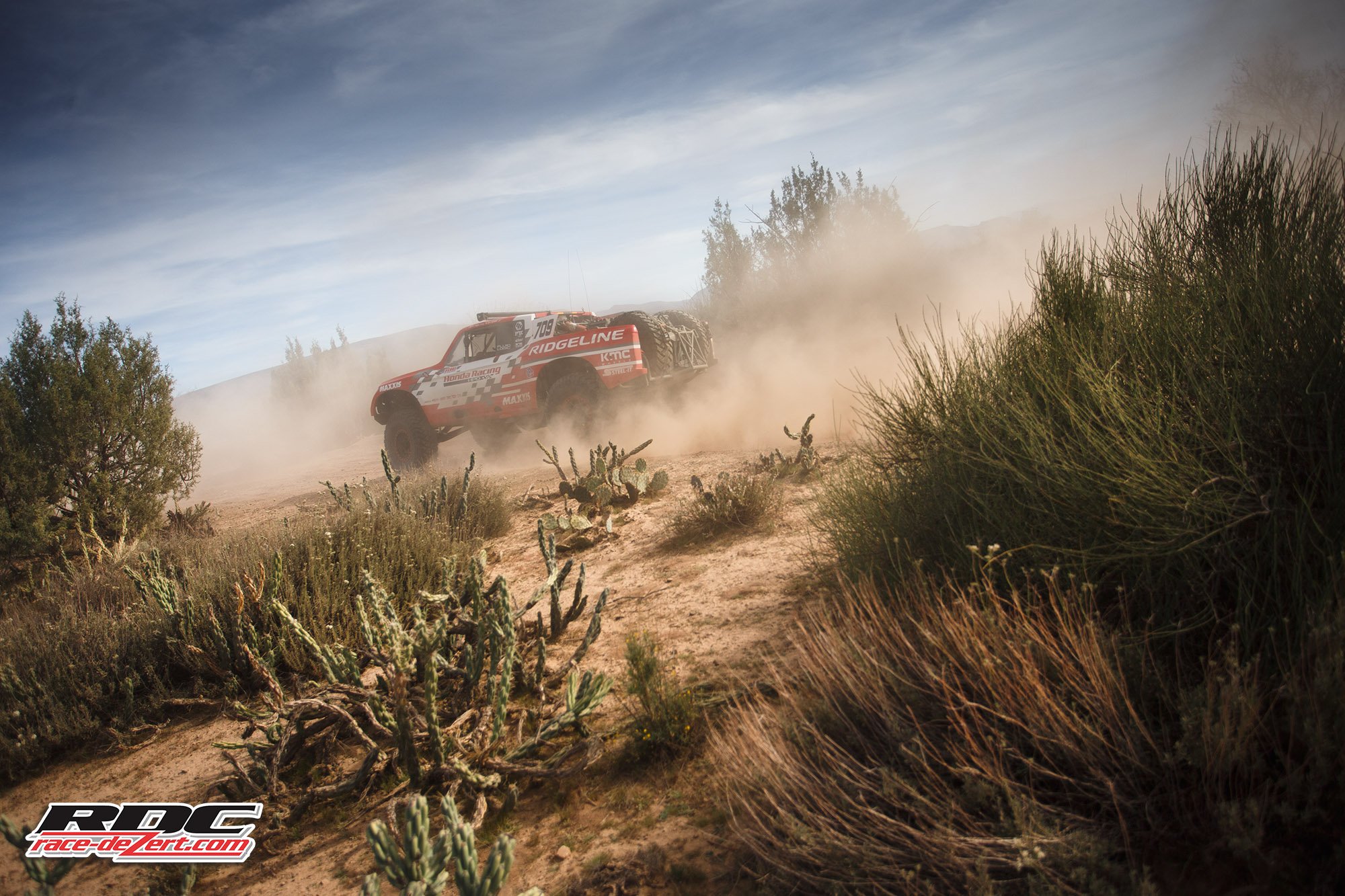 Jeff Proctor got another class 7 win in his Honda, but not after having some issues along the way. Second place Dan Chamlee, and third place Mike Shaffer were hours behind; both very experienced in Baja. The class one winner was Brad Wilson after a tough battle with Cody Parkhouse who was second.

Class 10 went to Ethan Hagle, and spec TT was won by Elijah Kiger. Those who suffer problems, but keep going can be rewarded in other ways. They sometimes have an opportunity to help others. One example was Darren Skilton racing the Glickenhaus Baja Boot. He stopped to make repairs right before the new section of course called Fred’s Tractor Trail. The trail was narrow, and the only road around. There was no way to get a chase truck out there to help anyone. Skilton made his repairs, and then carried a driveshaft and parts to the Mango racing TT at mile 397, and an RZR hub to Kyle Ahrensberg who was broken at mile 395. 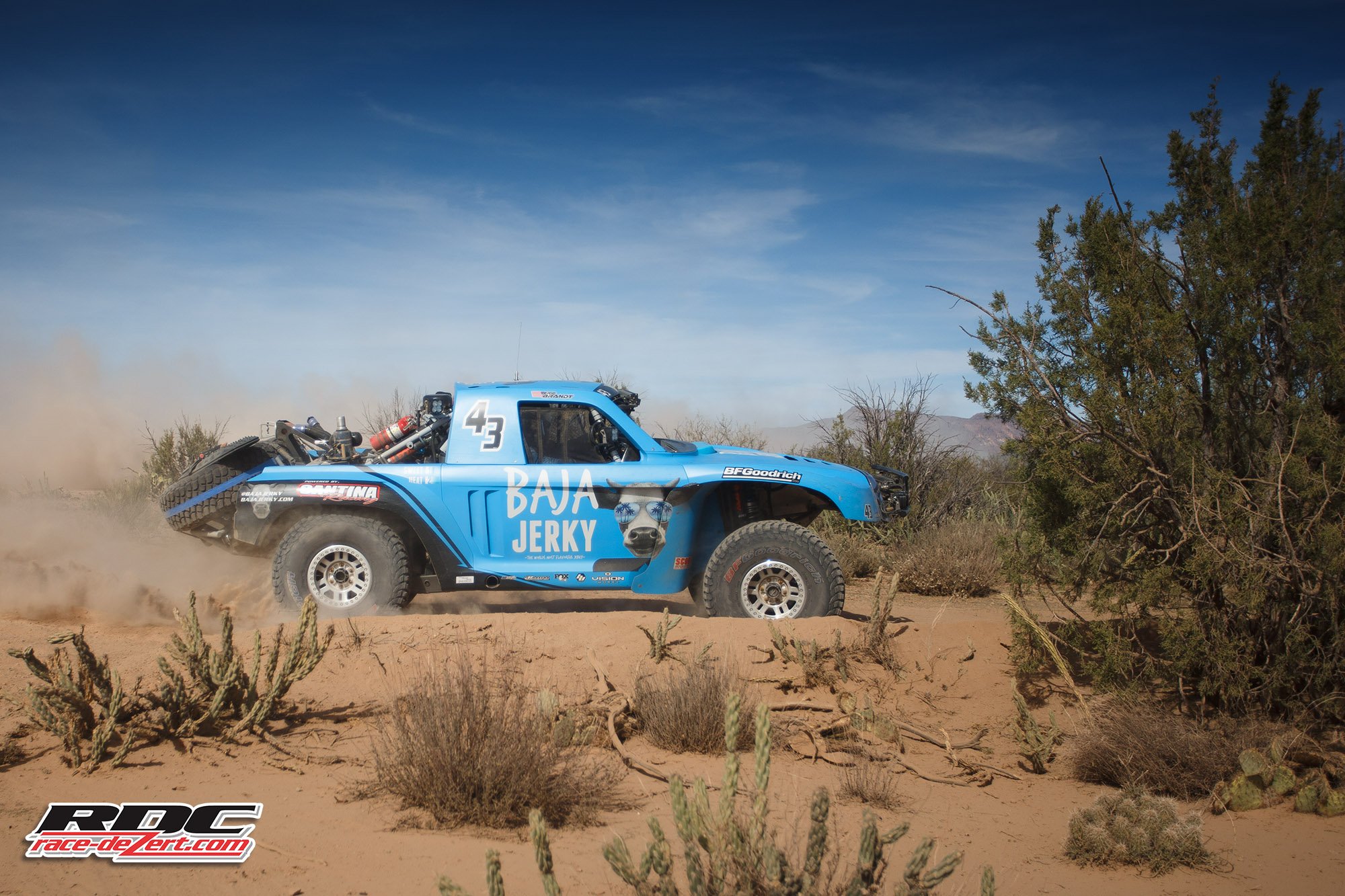 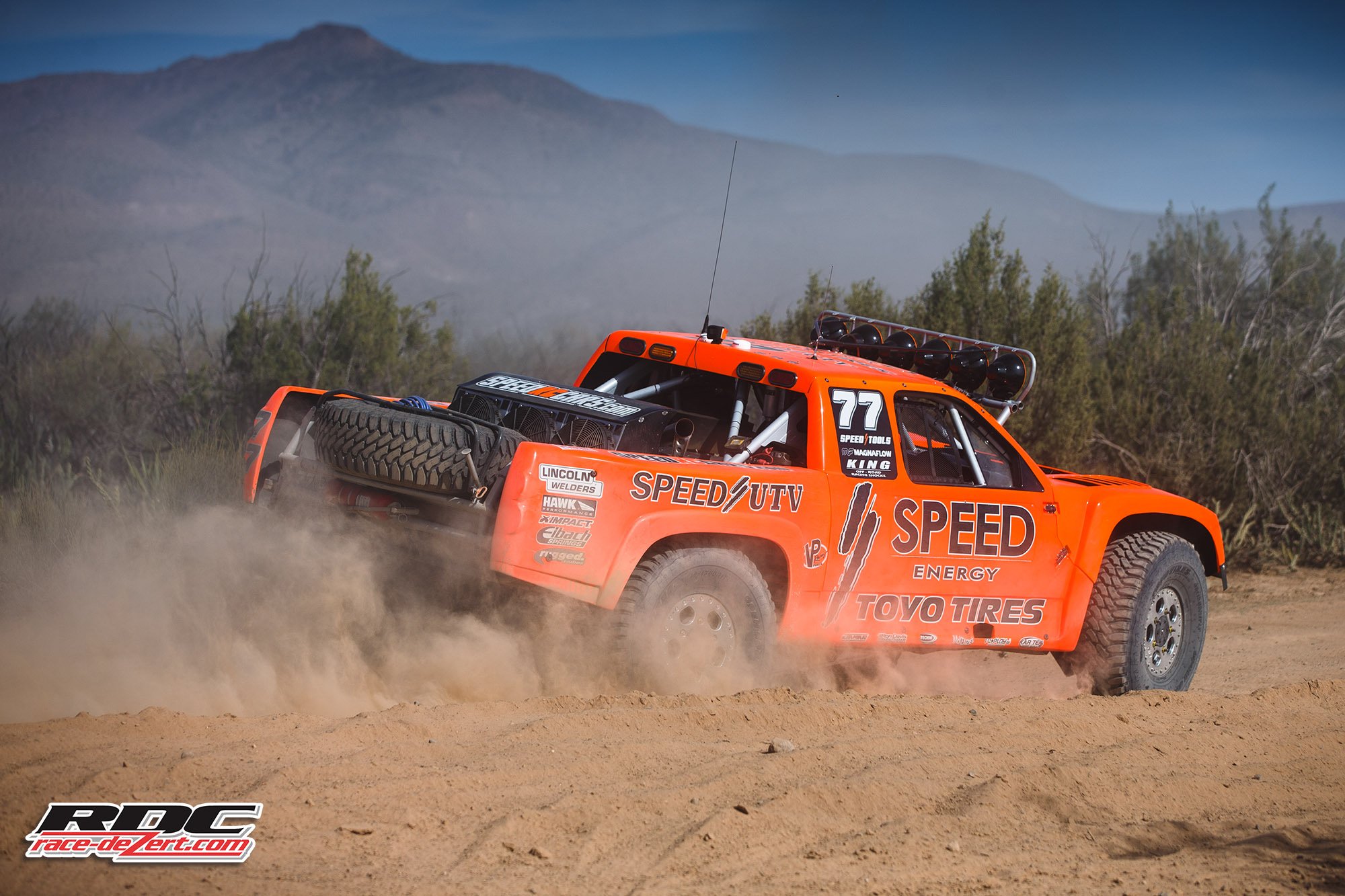 Darren was not the only one to save others. Robby Gordon was racing with Steve Strobel who jumped in the truck for a stint. Steve missed a turn and went off a 10 foot drop causing double flats. The down time took Robby out of contention for the win, but he doesn’t quit, so he was going for a finish. He came up on Larry Roeseler and Eric Brandt who were racing the entire 1226 miles without relief. Larry had a serious transmission leak and had to get to his pit. Robby threw a strap to Larry’s truck and pulled him down the course. It was a Baja legend train, and the fans were going nuts. Larry said that Robby had his arm out the window giving the fans a thumbs up. What a great example he was setting for his son Max who Robby says will be driving next year. Robby said he was only passed by Justin Matney who was ahead on time anyways. He dropped Roeseler off on the pavement where he was able to fill up his transmission and go on to finish. Larry said without Robby’s help, he would have been stuck out there all night. Of course, there are no competitors who get more respect from racers, and accolades from the fans than those in class 11. I don’t even know what it takes to drive a stock VW Beetle 1226 miles through Baja; it’s amazing what they do. The cheers from the fans propel them through deep silt, huge rocks, and up steep hills. Tourism officials estimated as many as 200,000 spectators were spread out down the peninsula. Twelve teams showed up to take on the nastiest, and one of the longest courses ever. Eight teams finished! On top was 1145 Hector M. Martinez, the team from Ensenada. 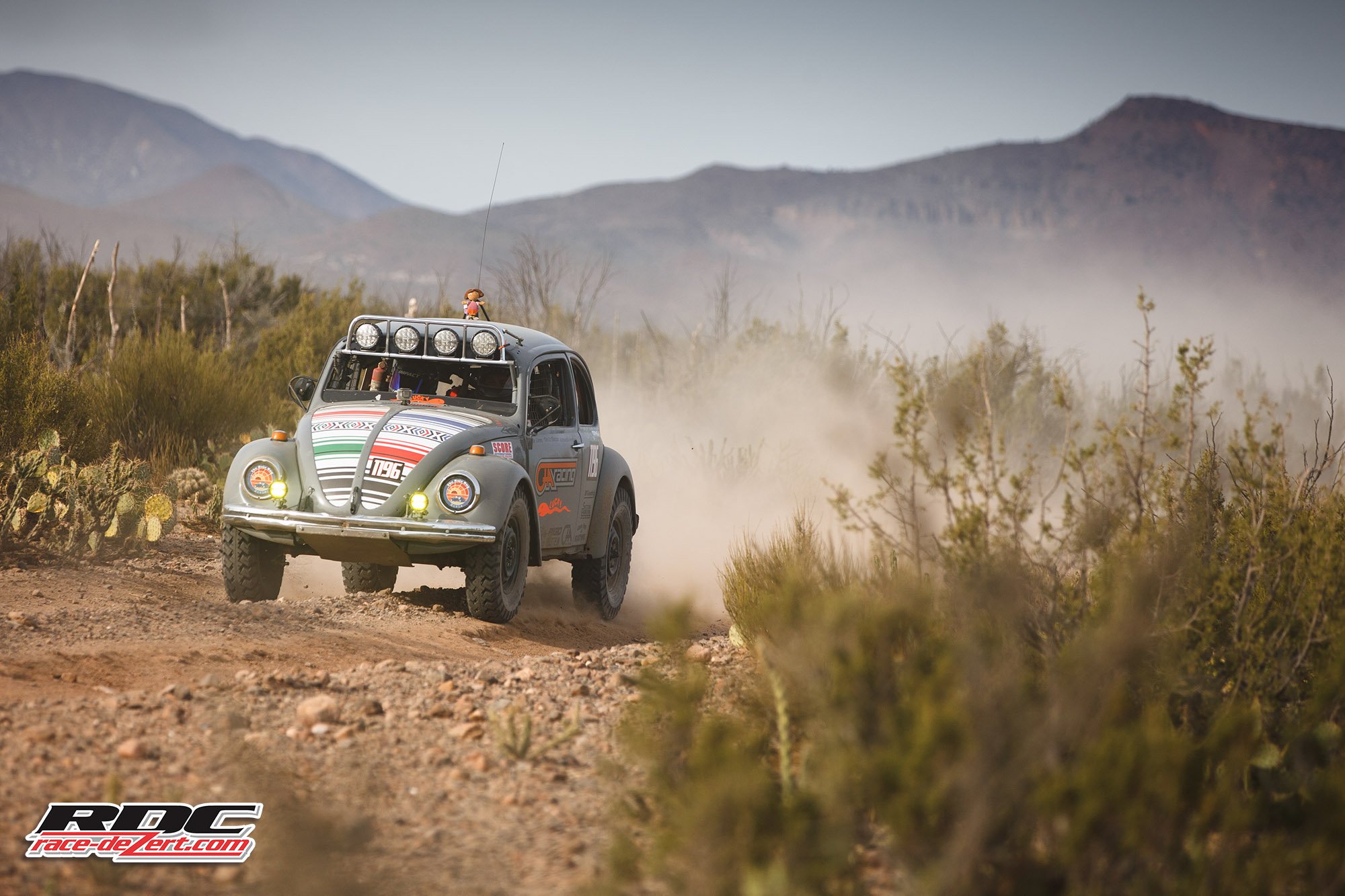 As competitors rolled up on the finish line ramp they all said much of the same things. Running on pure adrenaline, their voices cracking, they were all grateful to be there. So many people make a team, and so many sacrifices are made along the way that gratitude is only thing on their minds. Many will question why they did it, but next time a peninsula run comes along, they will all be back; just watch.