Rally Estonia: triumph of the Russians at the FIA WRC roundThe seventh round of the FIA World Rally

Championship has finished in Estonia today. According to the results of the four-day rally, the Russian crew of Alexey Lukyanuk and Yaroslav Fedorov in Škoda Skoda Fabia Rally2 Evo car from the Latvian team SRT took victory in the WRC3 standings.

A small spectator special stage on the territory of the Estonian National Museum opened the route of the largest sports event in the Baltic States on Thursday. The starting order was traditional – the first on the track were the crews in the world rally cars, then – the representatives of all standings according to their current position in the intermediate classifications WRC2, WRC3 and Junior WRC. At this 1.6-kilometer stage Rally2 crews immediately settled in the top ten overall – Mads Ostberg, Jari Huttunen, Aleksey Lukyanuk and Gus Greensmith shared the fourth place, setting the same time 01.43.4 minutes.

The first full competitive day on Friday consisted of four special stages driven twice, with an overall competitive distance of 128.24 kilometers. Usually the drivers focus on a long positional fight, gradually pick up the pace and try to make the best use of their starting positions. However in the summary classification of WRC2 and WRC3 standings during the morning section Oliver Solberg’s crew dropped out of the game due to technical problems with the car and Jari Huttunen – as a result of an accident. Alexey Lukyanuk with his new co-driver Yaroslav Fedorov had no equal in speed among all the crews in Rally2 cars. Competing on the tracks of the FIA World Rally Championship for only the fourth time in his career, Lukyanuk made no mistakes and increased his advantage with each special stage he passed. The Russians finished the day comfortably and confidently leading among all similar cars, ahead of Andreas Mikkelsen (WRC2) by 19.9 seconds, being 44.6 seconds ahead of the closest pursuer in their WRC3 standings, and also took the eighth place in the overall rally standings.

The organizers of the Estonian round of the FIA WRC tried to balance the route of the rally. There were four more special stages on Saturday that also had to be overcome twice, with a total distance of about 132 kilometers. Forest roads became a fly in the ointment, because rather deep ruts appeared during repeated driving, so many drivers complained that sometimes they were blown off optimal trajectories and tire wear increased. The ruts played a dirty trick with Nikolay Gryazin, who turned over his car at the SS13 and blocked stage for several minutes. Mads Ostberg could not avoid punctured wheels and rolled into the depths of the field. Two contenders for the podium among the WRC3 standings representatives retired at once – Emil Lindholm tore off the rear wheel as a result of an accident, and the local driver Egon Kaur damaged the suspension in his car and could not continue driving. Aleksey Lukyanuk continued to build up an unattainable advantage – the fastest times at all special stages and the lead in the WRC3 standings with a margin of 2.25.4 minutes from Kajetan Kajetanowicz. In addition Lucas continued his triumphant moving among all Rally2 crews and was 59.2 seconds ahead of Andreas Mikkelsen (WRC2).

On the final day of Rally Estonia Alexey Lukyanuk and Yaroslav Fedorov finished their dominant performance with a victory in the WRC3 standings despite the fact that their car rolled over at the final stage of the rally. Fortunately for the Russians, the Škoda Fabia Rally2 got back on its wheels and was able to start again that allowed Lukyanuk and Fedorov to finish the rally with the lead over their closest rival Kajetan Kajetanowicz of 3.15.9 minutes. The result of the Petersburger was not surpassed among all the Rally2 crews, where he was able to keep a margin of 13.8 seconds ahead of Andreas Mikkelsen, who competes in the WRC2 standings in the same Škoda Fabia Rally2. In addition the Russians secured the eighth position in the overall standings of the Rally Estonia.

The next rally, where Alexey Lukyanuk will perform is scheduled the next weekend – the Italian Rally di Roma Capitale will start on Friday, 23 July, near the Castel Sant’Angelo in Rome.

Alexey Lukyanuk, driver,
“The final day was short enough, but so energetic. There were various special stages, the first one was very interesting, so narrow and twisted. We drove it carefully. The second special stage was faster and it was last year, so the guys outraced us easily! The third special stage consisted of sand and stones, there was a serious rut… Everything went fine, we controlled the gap, we were going to show the class at the power stage, but something went wrong…

In a corner over a jump in a rather deep rut the car got on two wheels and eventually turned over. I couldn’t keep it from overturning, although I reacted with the steering wheel, but the circumstances were stronger. We rolled over twice and scooped up so much gravel that I barely found the engine start button. But we finished and, fortunately, didn’t lose position, only some time, and it doesn’t cast gloom over the festivities in any way! We won the WRC3 standings, we are the fastest among all Rally2 (R5) cars, we are in the top ten in the overall standings at the FIA World Rally Championship round! I’m absolutely delighted!

Great thanks to Alexander Rzhevkin for this opportunity. Thanks to the SRT team for the phenomenally strong, reliable and fast car. I apologize for giving you some work! And also, thanks to all the fans who followed and worried about us, I think we had a good performance”.

Yaroslav Fedorov, co-driver,
“The rally was absolutely amazing! No one could have imagined that it would be so cool: we rolled over, got on the wheels, finished and won not only in our standings, but among all Rally2 cars. This is probably what is called “Lucas’s style” that doesn’t imply a boring drive to a guaranteed finish and victory. The whole rally was held in such an emotional vein and warm atmosphere in the crew – during all the competitive days it was cool, positive and comfortable.

Many thanks to Alexey Lukyanuk, to be honest, I’ve missed such fast driving, an attack at every special stage. It’s an amazing experience working with a driver of this level. Lucas is very strict about reading the pacenotes, it is sometimes specific to me and differs from what I most often work with – I had to adapt quickly. We worked a lot using onboards, and I hope that I didn’t really stop Lucas from setting such amazing speed at the special stages.

Many thanks to Alexander Rzhevkin for this opportunity to return to the FIA World Rally Championship. I was happy to work with the SRT team again, it prepared the car perfectly! And, of course, many thanks to all the fans; it seems to me that we gave you amazing emotions. Of course, everyone flinched when they watched the live broadcast, but it is these rallies that are most remembered and go down in history. When we arrived at the finish podium in a damaged car, the audience welcomed us very warmly! Definitely, this event will be remembered, and not only in Estonia”. 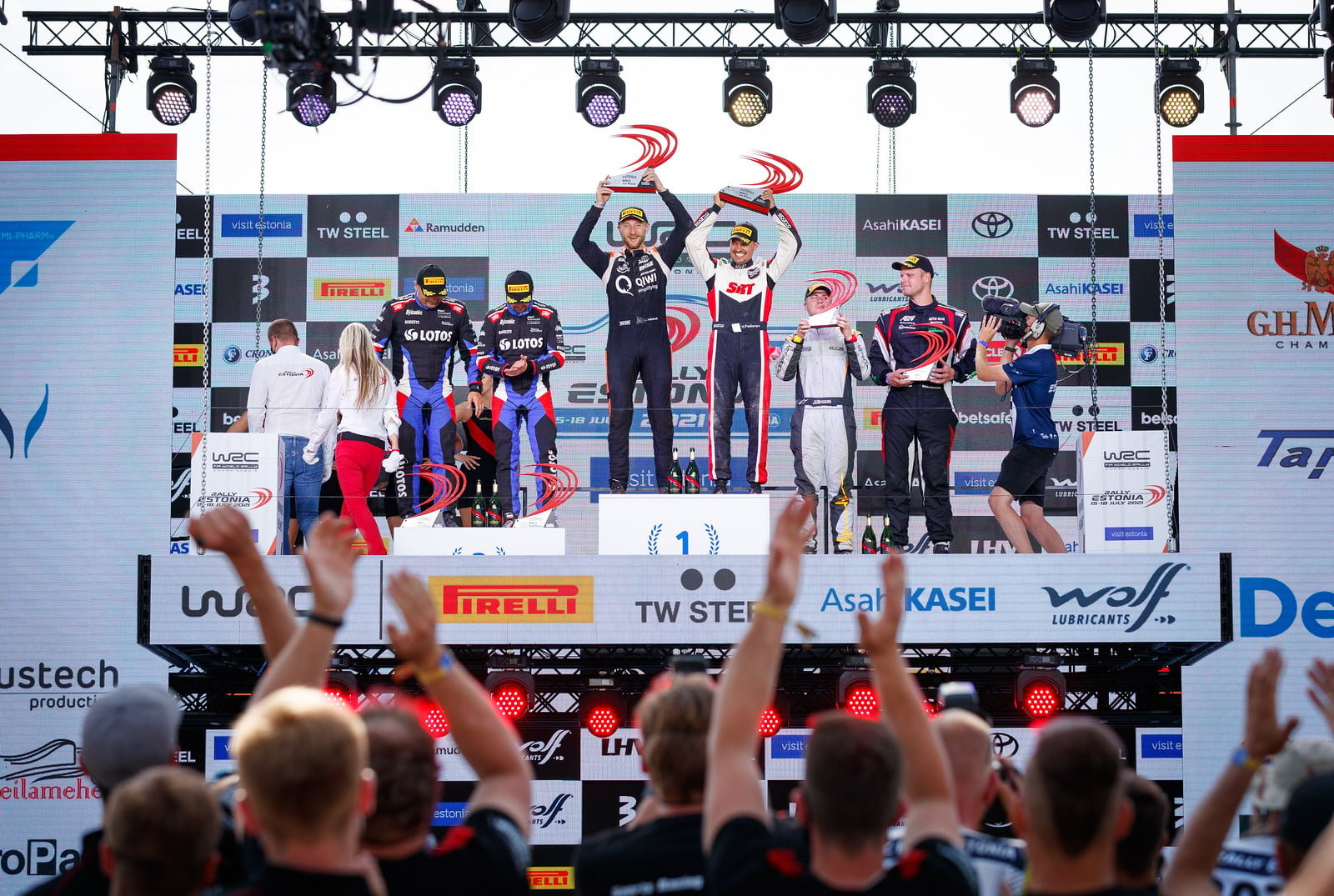