FIA World Rally Championships bring out some of the best rally drivers from around the world to one location where they race head to head for the podium. This year marks the fiftieth anniversary of Rally Spain; where over four days, seventeen stages and two hundred thirty two competitive miles the world rally champion would be decided.

Rally Spain takes place in the northeast part of the country, including the capital of the Catalonia region and the second biggest city in Spain, Barcelona.

The rally brings in a variety of driving terrains, from slipping and sliding across gravel roads, to smooth and flat tarmac surfaces where the drivers push their rally cars to the limit of the tires. The fast, smooth and sweeping tarmac stages in Rally Spain are about the closest roads where WRC gets to a race track.

The transition from gravel to tarmac, brings a new challenge to the service crew. Where in under seventy five minutes, each team will convert their rally car from gravel to a tarmac setup. The conversion includes everything from replacing the tires, wheels, brakes, struts and differentials. 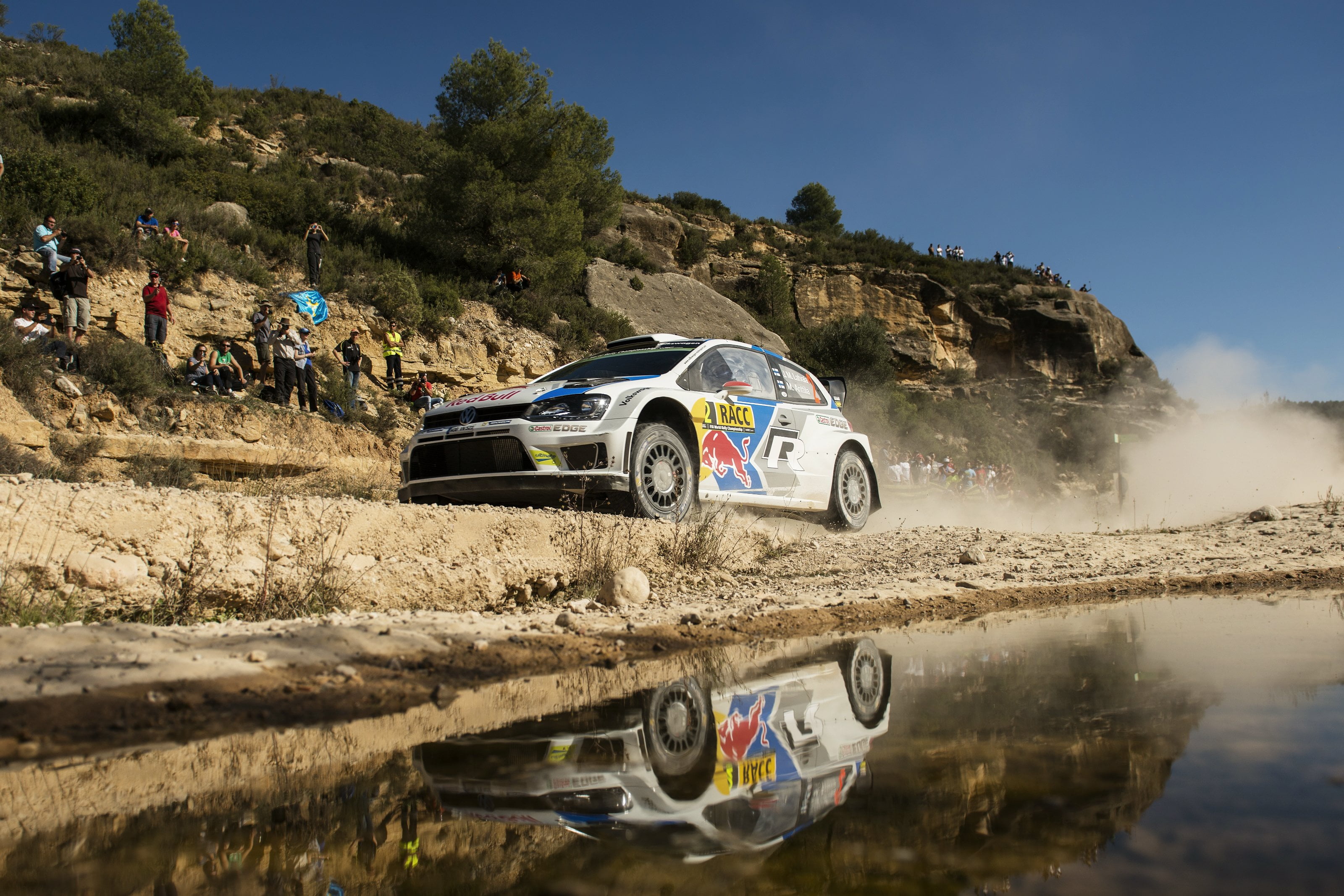 Sebastian Loeb dominated Rally Spain from 2005 until 2012, however after his retirement in world rally, the top of the podium is anyones game.

Over twenty thousand fans gathered around the race course in downtown Barcelona to get pictures and author-graphs from world renowned rally drivers such as Sebastian Ogier, Jari-Matti Latvala, Ken Block, local hero Dani Sordo and many more.

The rally began on the all new street stage after the opening ceremonies in downtown Barcelona, until 1975 the same streets hosted the Grand Prix.

For the first time this year, in the Ford Fiesta RS WRC, Ken Block along with his co-driver Alessandro Gelsomino have made an appearance at a World Rally Championship race since their 7th place finish at the 2013 Rally Mexico. Almost immediately out of the gate, Ken Block – in a gymkhana like fashion – tagged the concrete barrier after a run in with the wall. Although coming in through the finish line on a rim in 12th position overall, Block was a fan favorite. In nothing short of spectacular showmanship display, throughout Rally Spain Ken Block oversteered into corners and pulled off additional doughnuts to get the crowds roaring. 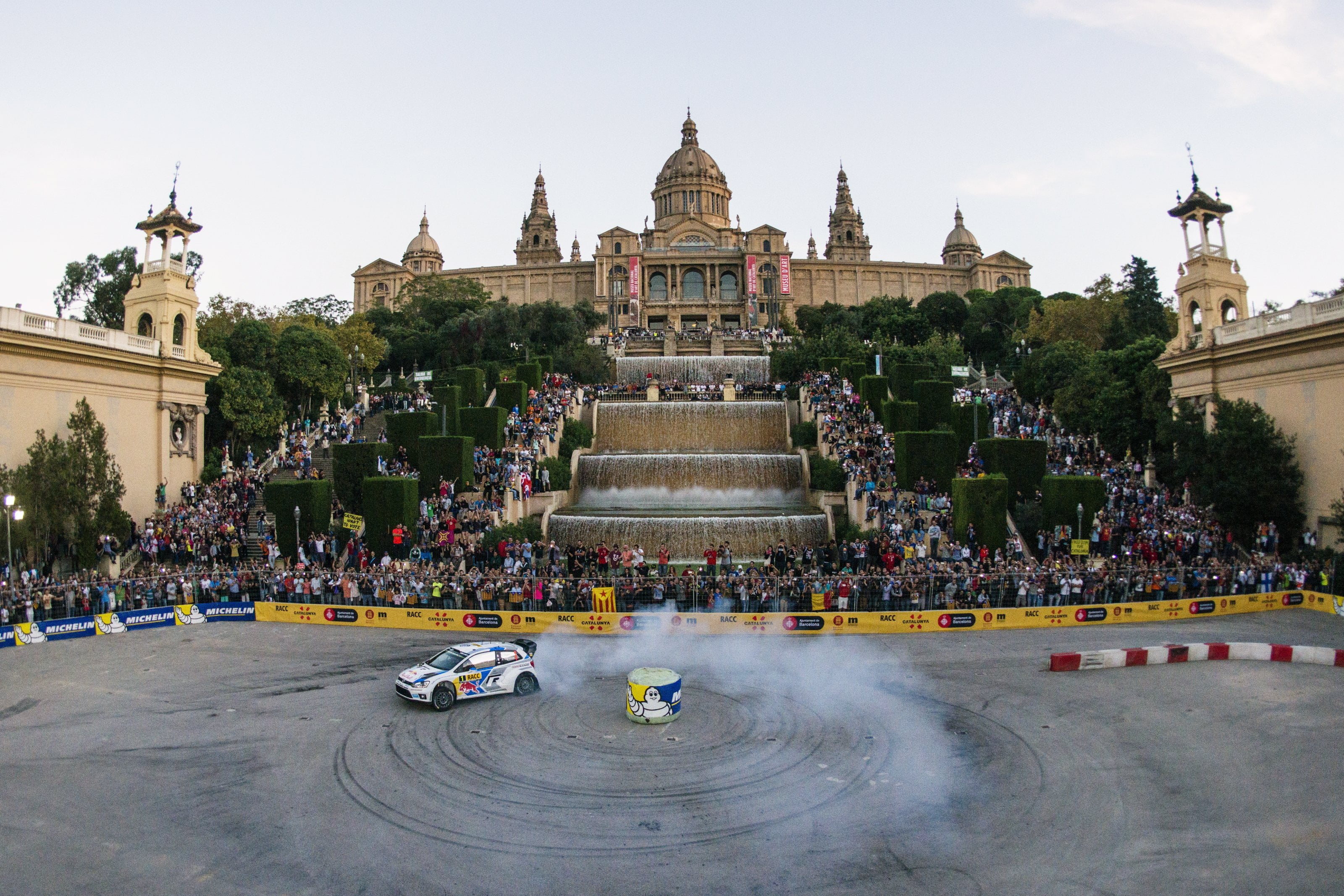 Andreas Mikkelsen had an impressive strategy for stage one, where with practically bald tires on his Volkswagen WRC car, he gained the lead position with a two second gap over the next quickest driver on the opening day tarmac stage. However, due to the dusty conditions over the gravel stages in day two, a flat tire in day three, and in the final day, a ten second penalty for arriving at the start line too early, Andreas Mikkelsen and his co-driver Ola Floene finished 7th overall.

Dani Sordo a local hero with a massive social media following among the Spanish crowds, draws hordes of fans to the stages. After reporting clutch issues in stage one, he still managed to finish the stage and the overall rally in the five quickest times along with his co-driver Marc Marti in the Hyundai WRC car.

The fight for the world champion title was between Sebastien Ogier and Jari-Matti Latvala. 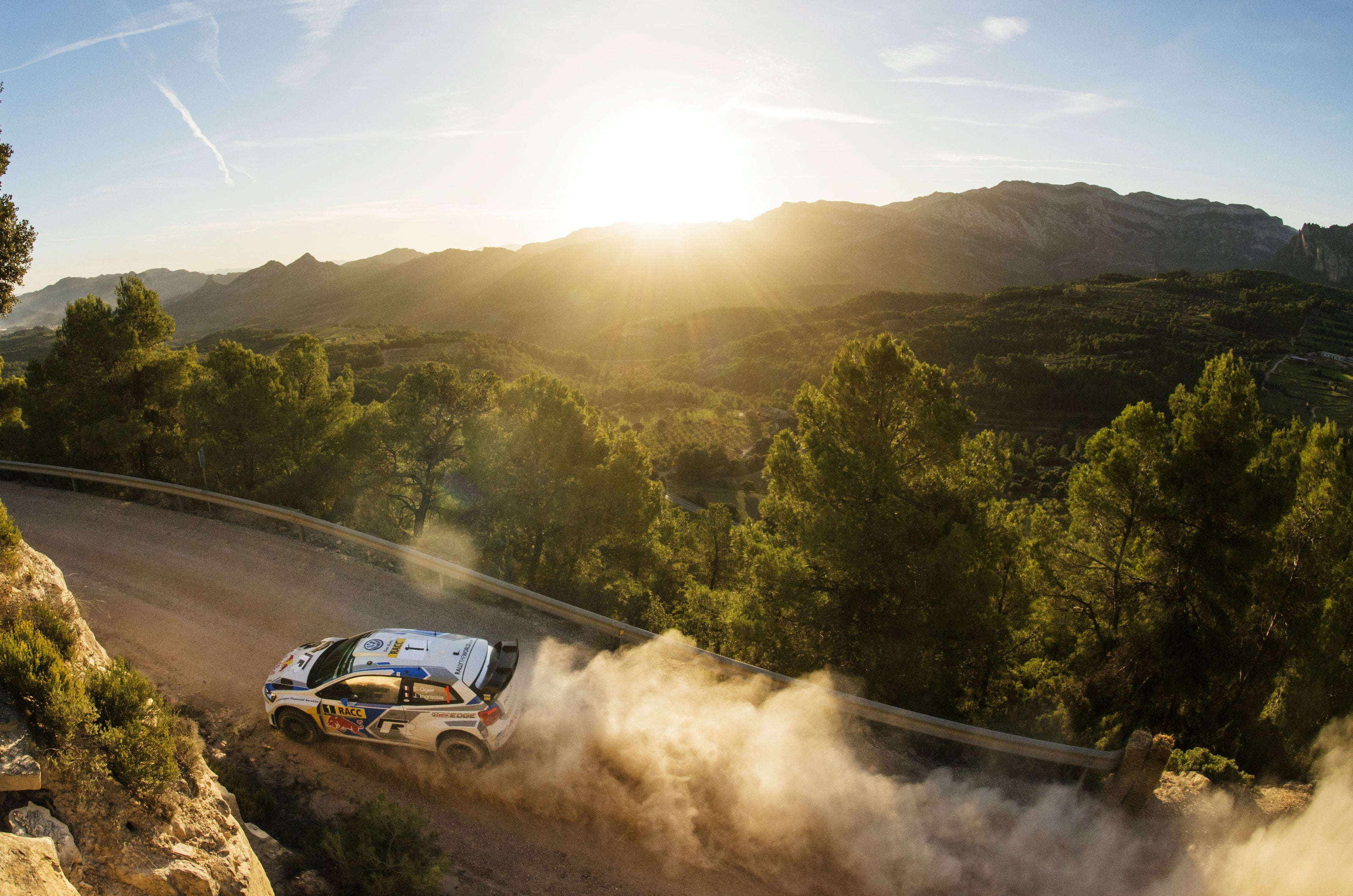 Throughout Rally Spain, in the Volkswagen WRC car, Jari-Matti Latvala maintained a strong second position, with an ever decreasing gap between Ogier. Day two began with a set of small setbacks for Latvala, among them were visibility issues and clipping a rock early in the race which ended up sending the car fish tailing down the road. Although struggling to find the right lines throughout the remainder of stage two, and the rear of the car coming loose too easily in stage three, the WRC car was back in tip top shape after service. Throughout the remainder of Rally Spain, Latvala pushed the rally car as fast as he could and finished in second place only 11.3 seconds after the leader.

Sebastian Ogier finished the Thursday stage of Rally Spain in the number two position, only 1.8 seconds behind Andreas Mikkelsen, who ran the tarmac stage on practically bald gravel tires. However, after day two, with a gap of 36.6 seconds between Ogier and Latavala it was clear that it would be difficult to take the lead away from Ogier. Sebastian Ogier and his co-driver Julien Ingrassia lead day three and day four flawlessly in the Volkswagen WRC car, finishing first overall and securing Ogier’s second consecutive world drivers’ title.