Racers in the General Tire Jeepspeed series presented by KMC Wheels and Premiere Automotive were anxious to participate in a brand new event in the Best In The Desert off-road racing series (BITD); the Laughlin Desert Classic in Laughlin, Nevada. Racing next to the Colorado River in Laughlin has been going on for decades, but it was a first time for the BITD series. Many of the longtime Jeepspeed racers had extensive knowledge of the Laughlin course, but the combination of desert terrain and a man-made infield section provided the same challenge to every competitor; regardless of their familiarity. The two-day event would have heat races consisting of 4 laps with a grand prix finish. That means once the class winner crosses the finish line, your current lap is completed but nobody starts a new lap. You can run three laps and still finish, but you won’t receive the same points as someone who did all four. Combined times from both days would determine the lowest overall elapsed time and the winner. Back to his winning form from last season, defending Jeepspeed Challenge Champion Rick Randall was the 1700 class overall winner. He was followed by Skyler Gambrell, second overall and Garett Allred with the final podium position; third overall. 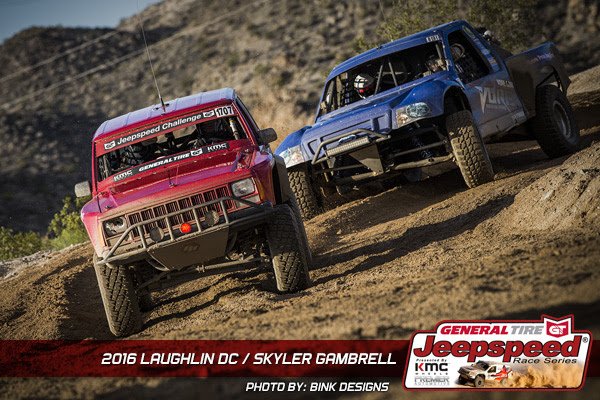 “It was a fun event and the course was great,” said Randall, “We started 7th on Saturday, in the 3rd row. It was nice that it had rained the night before because there was no dust but on the flip side, it was hard to get on top of the soft, wet dirt. We got to the front and were lucky enough to stay there for the rest of the short race. The Jeep ran great with no issues. On day two, we raced pretty hard for the 1st lap and waited for a split time to see what everyone else was doing. It seemed like we put some time on everyone else so we backed off a little on each remaining lap. Our new Randall Racing engine ran great and we finished without issue. My co-driver Kevin was great all day calling out the turns. This may have been our first race with zero issues. It was great weather, great company, and a fun win.” 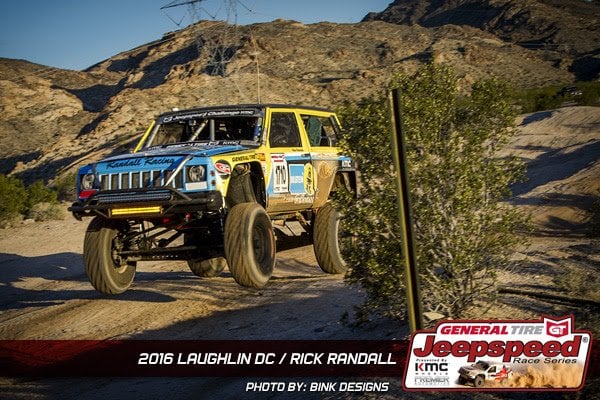 Skyler Gambrell kept his podium streak intact driving the bright red Jeepspeed rental Cherokee with a second place overall for the weekend. The current points leader, Gambrell won the first two races this season and now follows that up with a strong second place. An accomplished driver, navigator, builder and race prepper, Gambrell is always humble but very skilled and a threat to win every time out. “After two extremely lucky races in the little red Cherokee, I knew that this new “sprint race” would be a serious test on the car, said Gambrell, “I actually prepped it bit rather than the “rinse and run” that I had done at Parker and the Mint. We started three wide which was awesome. I slid through the turns off the start and ended up getting the holeshot. I held the lead for the whole first lap. I ran aggressively but not over the top. 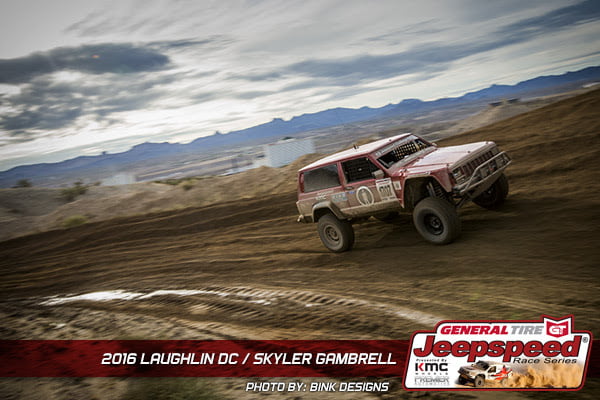 I could see the field inching in on me as we came into the main pit area for the start of lap two. I was struggling up the sand washes but the car felt great. Midway through lap 2, I could see the super distinctive lights of Randall in the 1710 and knew my number was up! He out powered me up a sand wash and soon after Short bus (Kevin and Sean McKeehan in their yellow Cherokee) motored on by. 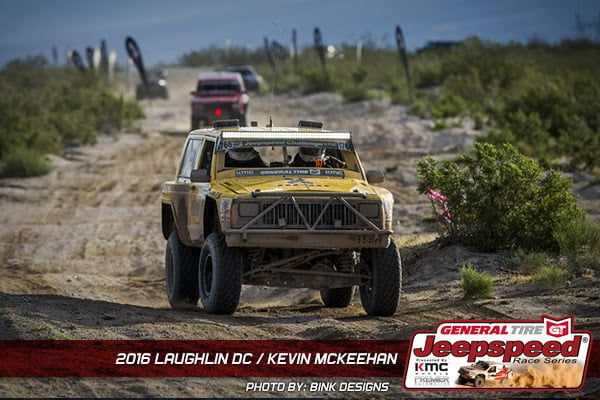 Knowing that I had to be smart and race to a finish and not a win, I settled into a nice groove and held my third position. I kept watching the mirrors for Tim Martin who is close to me in championship points for the season. At the end of lap 2, I came up on a yellow turtle, aka McKeehan tipped it over right before the hot pits. I was back in second.” Gambrell and co-driver Ryan Sonnenberg held on to second and put together another strong race on Sunday, finishing second to Randall again. Gambrell’s results will maintain his top spot in the season-long points championship.

After a disappointing DNF (did not finish) at the Mint 400, Garrett Allred rebounded nicely with a 3rd place podium finish in Laughlin. 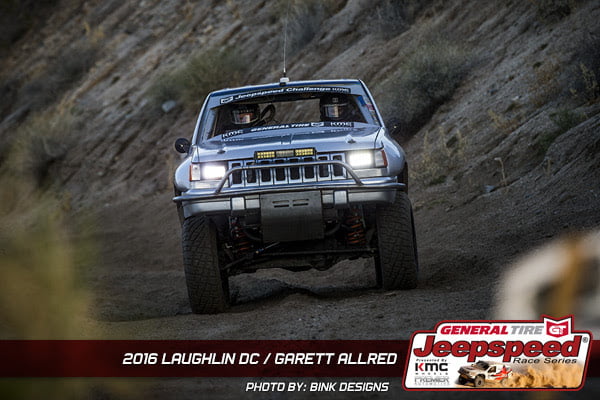 Second in points and fourth overall was Tim Martin. “Saturday morning came way too early,” said Martin, “We started near the back and started working our way up. I was being cautious on the first lap but we still bottomed out the new shock that we had to modify in order to make it work. Something wasn’t quite right and I couldn’t push as hard as I wanted to. We finished the first day in 3rd place about a minute behind Gambrell and 2.5 minutes behind Randall; not too bad. After the race, we had some free time to go have breakfast and then work on the Jeep. We took apart the shock and made a few changes hoping it would be better on Sunday. We lined up with Skyler on the right side of us for the start on Sunday. He got the holeshot and we followed. I passed him a few miles in and stayed ahead of him through most of the Fox proving grounds. On one of the banked turns before the proving grounds, I bottomed out hard on the passenger side coming out of the turn. The steering wheel was off 90 degrees from where it should be. Something was bent. 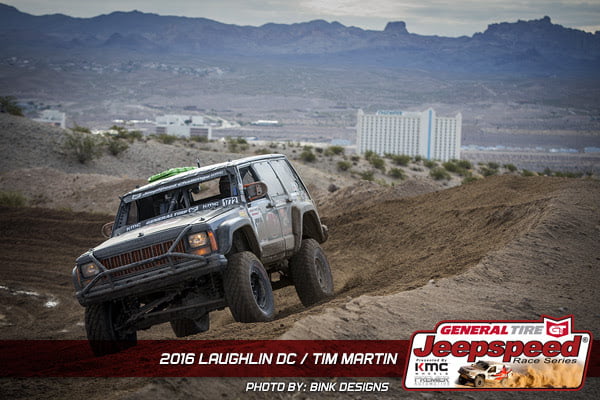 We slowed down a little because I wasn’t sure if something was going to break. After lap 1, we made a quick stop at the hot pits and they reported everything was good. We took off on lap 2 and bottomed out the passenger side again on some braking bumps going into a corner. Now the steering wheel was 180 off from normal. As we caught Allred going into the proving grounds, the front end did not feel right and was making some bad noises. My co-driver Mac jumped out to check what was wrong and found the track bar end was badly bent. Twenty minutes later, we had the track bar replaced and somehow had not been lapped. We managed to stay ahead of the leader Randall for the remainder of that lap and lap 3. We beat the 7:30 cutoff for the grand prix finish. We finished all 8 laps for the weekend and managed a 4th place finish. I wasn’t too sure about the format for the Laughlin Desert Classic. I’ve never done the Bluewater Desert Challenge (too far away and too few miles) and didn’t really know what to expect. After the race, I can say the course was great and the multiple heats are a good way to break things up.”

In Jeepspeed Outlaws (3700), it was Jeepspeed veteran Billy Bunch in the top spot. Bunch had his V8 powered Jeep Wrangler running at full speed on the fast Laughlin course. In second place was newcomer Ian Massey in a Jeep Cherokee. Third place went to Mike Bragg in the big Dodge pick-up. Second overall Ian Massey is the perfect example of the kind of racer that Jeepspeed is geared towards. He wasn’t racing an exotic truck that cost him six figures to construct. He was racing the same Jeep he drove to high school. His Jeep still has window glass and license plates. Jeepspeed rules allow you to build your own race vehicle as long as it conforms to a few basic rules and the safety requirements. “It was my first race and it was a blast,” said Massey, “I had a couple friends along who helped me with the Jeep. My goal was to just survive and get to the finish. 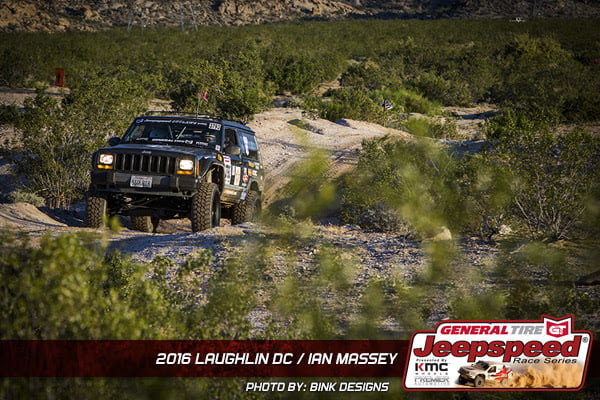 We broke a drag link on Saturday but we fixed it with a new set of Currie linkage that we got from the Jeepspeed trailer and had a clean run on Sunday. I plan to run the rest of the season and my ultimate goal is to win a championship.”

The rules are obviously easy to conform to if you have a Jeep Cherokee, Wrangler and Dodge pick-up all competing against each other on a level playing field. With strong support from the series sponsors General Tire, KMC Wheels, Premier Chrysler Jeep of Placentia, T&J Performance, Rock Krawler, Synergy, Currie Enterprises, G2 Axle & Gear, Howe Performance, KC Hilites, King Shocks, Rubicon Express, SmittyBilt, and Rugged Radios, the Jeepspeed series is the perfect place to begin your racing career. There are also bonuses and awards like the $500 paid to the winners of both 1700 and 3700 classes in Laughlin compliments of Rugged Radios. The racing is so much fun, some never leave. Billy Bunch was one of the original Jeepspeed racers 15 years ago. A past champion in the series, he has also competed in several other classes during his career, including Trophy Trucks. He chooses to race Jeepspeed and is still winning races in the series. If you would like to join the series too, go to www.jeepspeed.com. There you will find additional info, deals on some attractively priced race Jeeps, Jeepspeed news, rules, forums, race results, videos and much more. You can also go to the Jeepspeed forum and read in-depth race reports from many of the Jeepspeed teams. The next Jeepspeed race will be the Best In The Desert Vegas to Reno on August 17-20. The longest off-road race in the United States, it will also be round two of KMC Wrangler Trophy series.

For information about the Jeepspeed racing series go to www.jeepspeed.com. There you will find additional info, deals on some attractively priced race Jeeps, Jeepspeed news, rules, forums, race results, videos and much more. Go to the Jeepspeed forum and you can read in-depth race reports from many of the Jeepspeed teams. 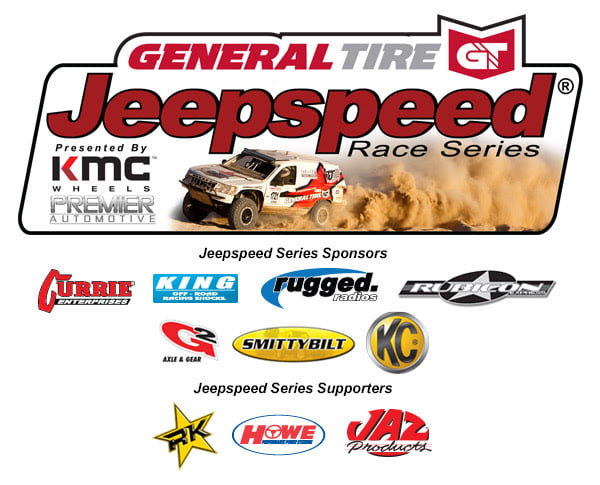 About Jeepspeed
The Jeepspeed series is a competitive, cost effective series that has pitted Jeep vehicles against each other on challenging desert courses since 2001. Unlike the more expensive spec racing classes, there is no obligation to purchase your race vehicle or parts from the series organizer. You build your own vehicle the way you like as long as it fits within the rules. Jeepspeed offers the most fun and closest racing in the desert today. Jeepspeed series is supported by General Tire, KMC Wheels, Premier Chrysler & Jeep, KC Hilites, Currie Enterprises, King Shocks, Rugged Radios, Rubicon Express, G2 Axle & Gear, Smittybilt, Rock Krawler Racing Developments, Poly Performance, Synergy Manufacturing and Howe Performance.