RDC Gets Schooled At Dirtfish – race-deZert.com 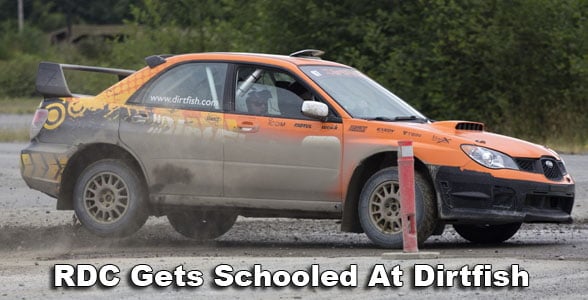 Race-Dezert and some members of the community headed up to Seattle, Washington to further their driving skills at the DirtFish Rally School! We enrolled in the 3-day advanced techniques class that they offer. The course consisted of 10 drivers and 5 Subaru STI rally cars. The Race-Dezert drivers consisted of Klaus Rasch, Austin “Fish” Farner, Pat Dailey, Josh Daniel, and Jordan Poole.

When you pull up at the Dirtfish school you get a pretty good overview of the property from above. The school is located on an old saw mill which consist of miles upon miles of tracks laid out across all kinds of surfaces; ranging from tarmac to dirt roads through the trees. We started out the first day in the classroom inside their 10,000 sq. foot facility. They told us right away that the classroom sessions would be kept short and to the point so we could spend the most time in the cars driving. Wheeeeewww!! Thats A Relief…

The main focus of day 1 is braking and late apexing. You want to come in hot to a corner and brake later than you would normally think. Then get the car straight as soon as possible and pointed in the direction you want to go BEFORE using the gas. This would prove to be the single hardest concept of the school for all of us off-road rear wheel drive racers.

Day 1 was kept to basic driving techniques; started on a skid pad and performed simple gas-brake-turn circles for a while. Then we worked up to a slalom course with a hard 90 at the end of it. The key of this was getting the car turned and pointed before you reached the next cone. The key part of doing this was getting your eyes up and looking at the next cone before you even pass the one you’re at.

After lunch we headed out to learn how to trail brake. Trail brake consists of coming into a corner fast and then hard braking before the corner, then slowly letting off the pedal through the corner. This will put the weight of the car on the nose where the turning is done, then slowly letting off keeps the weight transferring slowly to the back and off the nose as it finishes the turn. This type of braking would end up being the most common throughout the three days.

To finish up day 1 we headed out to the “Boneyard” course which consisted of both left and right corners up to 90 degrees and a back straightaway where you would be in top of 3rd gear. This course was one of my personal favorites over the three days.

Turning Brake. Yes its time to use the fun lever as I like to call it. After a quick classroom lesson on how to use the turning brake (like we’ve never used one in a rental right??) we headed out to the tarmac to do some runs on “The Grid”. All it takes is a quick pull and the car is rotating. Too much rotation and you’re done. We spent a couple hours messing around with the turning brake until we thought the instructors were going to puke from all the sliding.

Now it was time to combine the tarmac and dirt courses together. This was a course that consisted of “The Grid” and “The Skid Pad”. It also included a really fun “Bus Stop” turn. We were able to get a good pendulum turn going in the bus stop and if you did it just right you could keep good speed through it.

After lunch it was back out to the “Bone Yard” this time combined with “The Slalom” to make a bit longer course with a little of everything we had learned so far. By this time we are starting to get a good feel for the cars and our speeds are picking up. This would be the course we would run for the rest of the day and most everyone showed lots of improvement from day 1 to this point. As Jordan Poole put it, “Dirtfish is teaching me the correct way to enter and exit corners while carrying the most speed through the turn”.

Trees! This would be the final and by far most fun day of the school. Today the instructors wouldn’t say much in the cars and just let us drive. Did I mention trees? Yes it’s now time to do a full “rally” type course which included a narrow path at full speed through the trees! “The Wedge” course would be combined with “The Slalom”, “The Link” and “The Handling course” to make one epic course with a little bit of everything.

So did anyone take out a tree? Yes we had one tree casualty (not a RDC driver) but what happens at Dirtfish stays at Dirtfish (or until you watch the video).

This course was awesome. You could get into 4th gear coming down the back straight into a 90 degree left turn which made for some scary moments in a few cars. This was rally driving.

Overall I feel that the school definitely added to our driving skills. Yes, we were in AWD cars which handle totally differently than RWD cars, which is what most of us drive in off-road racing, but learning braking techniques and just learning to keep your eyes up and ahead of you can help a lot in off-road. The instructors at the school were all awesome and very friendly and fun to work with. I would not want to have their job of riding in these cars with crazy people like us.

If you’re looking to get into Rally racing or just want to have a good time and learn some skills that will help you anytime you’re behind the wheel I would reccomend making a trip to Seattle and attending the Dirtfish Rally School.

For more information on the school and the courses they offer please visit: www.dirtfish.com or give them a call 866-285-1332 make sure you tell them you read about it on Race-Dezert so you receive the “special treatment”.