Dakar Rally at the start of the year we’re now already knee-deep into another cross-country season. The next stop on the calendar is the 2017 Abu Dhabi Desert Challenge, a gruelling six-day race across the dunes that is sure to take no prisoners. 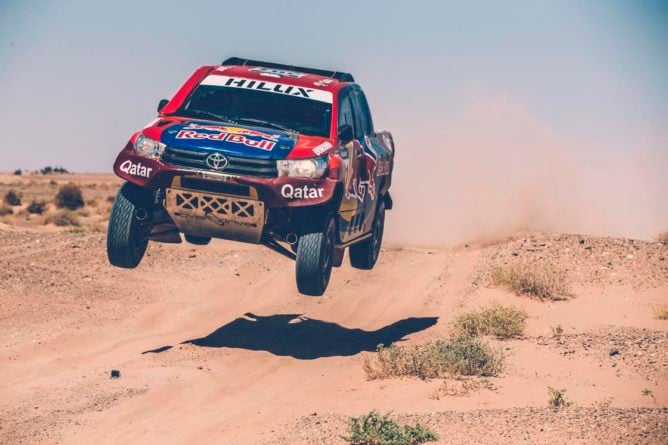 Looking to defend not only his ADDC crown from last year, but also his FIA Cross-Country Rally World Cup title is Nasser Al-Attiyah. The Qatari returns to Abu Dhabi with French co-driver Mathieu Baumel and the pair were in fine form as they picked up the win at the recent Dubai International Baja. The former Dakar winning duo will be out to get maximum performance from their Toyota Hilux as they lay the foundations for another successful World Cup season.

Among the challengers to Al-Attiyah is fellow Qatari Mohamed Abu Issa who is part of a strong fleet of MINI drivers contesting the ADDC. As well as battling each other these racers will also be pushed to the limit by intense heat in the Arabian Peninsula and the mountainous sand dunes they will find there.

We are promised plenty of great two-wheeled action running alongside the car category in Abu Dhabi with reigning Dakar bike champion Sam Sunderland involved in the race. British-born Sunderland heads up a rapid Red Bull KTM Factory Team line-up in which he is joined by Austria’s Matthias Walkner and France’s Antoine Méo. Also out to tackle the complete route of over 2,000 kilometres on KTM machinery is the UAE’s Mohammed Balooshi.

KTM’s distinguished riders will hope to maintain their manufacturer’s superb record at the ADDC with a winning streak that stretches back to 2001. Sunderland, Walkner, Méo and Balooshi are out to get the better of their Husqvarna, Honda and Yamaha rivals and put precious FIM Cross-Country Rallies World Championship points on the board.

Both cars and bikes get the ADDC underway on Saturday, April 1 with a timed super special stage at the Al-Forsan International Circuit. Then it’s out into the open desert for a further five days of racing before the chequered flag falls at the Yas Marina Circuit in Abu Dhabi on Thursday, April 6.

All our News Cuts, Action Clips and Images for editorial use during the Abu Dhabi Desert Challenge can be found here: www.redbullcontentpool.com.

Nasser Al-Attiyah: “This is one of my favourite desert rallies and one where you have to be fully focused and physically fit to succeed. Last year Mathieu and I gave Overdrive and Toyota their first ever win here. It was a great result and we are keen to do it again and take the championship lead. My other win was back in 2008 with my former Swedish co-driver Tina Thörner, but it is never easy here.”

Matthias Walkner: “I’m really looking forward to racing in Abu Dhabi and also the next race after that in Qatar. They are very different races. In Abu Dhabi you are off-piste 98 percent of the time with lots of sand and many dunes. On the other hand in Qatar you are almost exclusively in rocky desert during extremely long stages with brutally difficult navigation. I’ve been training in Morocco recently and now I’m glad the journey of the new season can begin.”

Mohammed Balooshi: “I’m very happy to be participating in my 6th Abu Dhabi Desert Challenge. It’s nearly a year now since I’ve raced this bike so I’ve had a couple of days testing before the race and I’m happy with how I adapted. Now I will take the chance on each stage to get even more comfortable with the bike. The aim is to give 100 percent at the race and come away satisfied, the result is really just a number.”