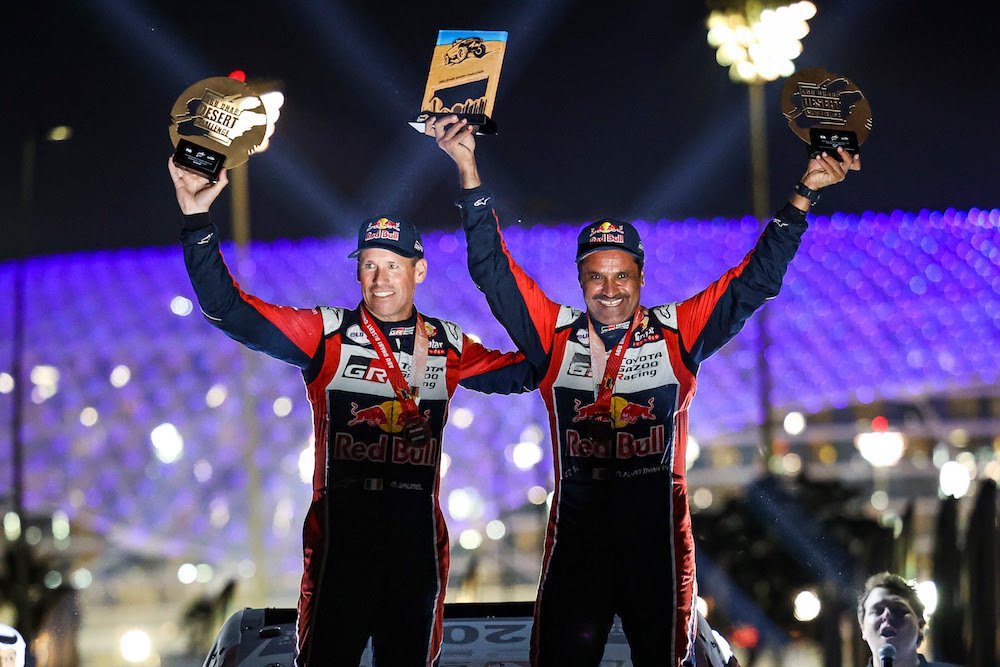 Historic World Cup wins and rally victories kept the Red Bull Desert Wings squad ahead of the pack in Abu Dhabi. The high-ranking performances of the off-road racers proved that they’re bang on the pace ahead of the upcoming Dakar Rally.

There were further strides taken by Nasser Al-Attiyah (QAT) in Abu Dhabi, as he chases down a fifth FIA World Cup for Cross-Country Rallies title in the T1 car category. The three-time Dakar winner and his co-driver Mathieu Baumel (FRA) led their class from start to finish. The points picked up at the Abu Dhabi Desert Challenge put the Toyota Hilux pairing in pole position to take their latest World Cup crown at next month’s Hail Rally in Saudi Arabia.

“There’s still one race of the championship to go and we must win in Hail. It will be another tough fight.” – Nasser Al-Attiyah

The Toyota Gazoo Racing duo of Al-Attiyah and Baumel have now recorded World Cup wins at three rallies this year; in Andalucia, Kazakhstan and now Abu Dhabi. Their phenomenal level of performance sees them consistently winning stages despite opening the road, a testament to the special bond between driver and co-driver that has been forged among the planet’s most dangerous deserts.

Al-Attiyah did come under early pressure from the MINI Buggy pairing of Kuba Przygonski (POL) and Timo Gottschalk (GER) in Abu Dhabi. However, this duo’s hopes of a podium finish suffered a serious setback on stage four.

“Next up for us is the Hail Rally, and I am sure that we can be quicker.” – Kuba Przygonski

The only place to start when recapping the side-by-side race at the 2021 Abu Desert Desert Challenge is with Cristina Gutiérrez (ESP) becoming the first-ever female driver to win a World Cup for Cross-Country Rallies title. The Red Bull Off-Road Junior Team racer and co-driver François Cazalet (FRA) certainly finished the job in style – winning the fifth and final stage.

Wins at the Andalucia Rally and Rally Kazakhstan earlier in the year had propelled Gutiérrez to the top of the T3 category of the World Cup rankings. Not even a serious back injury sustained in Kazakhstan could derail her march towards making history.

“We are World Champions! I can’t believe it, after such a hard year I’ve had, I can’t be happier. I have no words!” – Cristina Gutiérrez

Gutiérrez and Cazalet were joined in Abu Dhabi by the Red Bull Off-Road Junior Team crews of Seth Quintero (USA)/Dennis Zenz (GER) and Guillaume De Mevius (BEL)/Tom Colsoul (BEL). These pairings were running the 2022 spec OT3 and collecting valuable data for the development of the team’s race vehicle. Now the team will look to bring the momentum of Gutiérrez’s World Cup win to the upcoming Dakar in January.

The pressure was off Red Bull KTM Factory Racing’s Matthias Walkner (AUT) in Abu Dhabi – he’d already secured his 2021 FIM Cross-Country Rallies World Championship title at the previous round. The 2018 Dakar winner didn’t let up on his throttle though, and closed out his season with another sensational win.

“The whole year has been fantastic for me – with the help of the team, we have all worked really closely to bring the success we’ve had.” – Matthias Walkner

Elsewhere in the bike race it was a tough final stage for GasGas Factory rider Daniel Sanders (AUT). Sanders went into the last day fighting for the win, but running out of fuel on the fifth stage saw him forced to settled for 12th overall. Such are the ups and downs of racing thousands of kilometres through the desert.

“Although the result here has knocked me back a little, I’ll just take the positives and look ahead to the Dakar in January.” – Daniel Sanders

Local favourite Mohammed Balooshi (UAE) will be encouraged by his own performance in the bike race. A string of Top 10 stage results saw him finish as the sixth quickest biker overall at the Abu Dhabi Desert Challenge.

Nasser Al-Attiyah: “It was a fantastic win. We controlled all the race, from beginning to end. Once again our car was very good. There’s still one race of the championship to go and we must win in Hail. It will be another tough fight.”

Kuba Przygonski: “We enjoyed the rally and it is good preparation for the Dakar. We had fun in the MINI JCW Buggy and used the rally to do a lot of testing. Unfortunately, yesterday’s issues mean our overall result is not so good. However, that aside, the results are very good. Next up for us is the Hail Rally, and I am sure that we can be quicker.”

Cristina Gutiérrez: “We are World Champions! I can’t believe it, after such a hard year I’ve had, I can’t be happier. I have no words! Thank you all for your love and support, thank you to my family for always sending me the best energy! Thanks to all the Red Bull Off-Road Junior Team for a great job and thank you to my co-driver François Cazalet for a great year! This is rally-raid and you need to keep your speed all the time. These races are so long so it’s difficult to always be at the front on every stage. It was important to us to make sure we scored as many points as possible.”

Guillaume De Mevius: “I’m very happy with this rally, it was very nice for me and Tom to learn to drive together. Also for me to learn to drive in the sand and on the dunes. It was five days of sand so that definitely helped me a lot. I still have things to learn, but for sure this was a good training for me. We helped prepare the team’s car for the next Dakar so it was a good race for us. Now we have to concentrate on the Dakar and all our objectives for that. I’m certain it will all be OK and we will put everything together for the Dakar. Huge congratulations to Cristina and François, T3 Cross-Country World Champions!”

Matthias Walkner: “The whole year has been fantastic for me – with the help of the team, we have all worked really closely to bring the success we’ve had. I have ridden well and not made any big mistakes, or suffered any injuries. I’ve learned a lot, even from this week riding in the sand, which is normally not my best terrain to race in. My riding has improved, and we’ve found some good set-ups for the bike, too. Overall, it’s been an incredible season and to top it off by winning the last race really helps my confidence. The big goal is of course now Dakar, it’s not far away, and I’m really looking forward to it.”

Daniel Sanders: “The last day has obviously been a huge disappointment for me and the team, but that’s racing – I guess you have to take the smooth with the rough. Although the result here has knocked me back a little, I’ll just take the positives and look ahead to the Dakar in January. I’ve really gelled with the bike – my navigation is always improving, and my pace is definitely there. We’ve got less than two months till Dakar, and I’m going to be ready!”