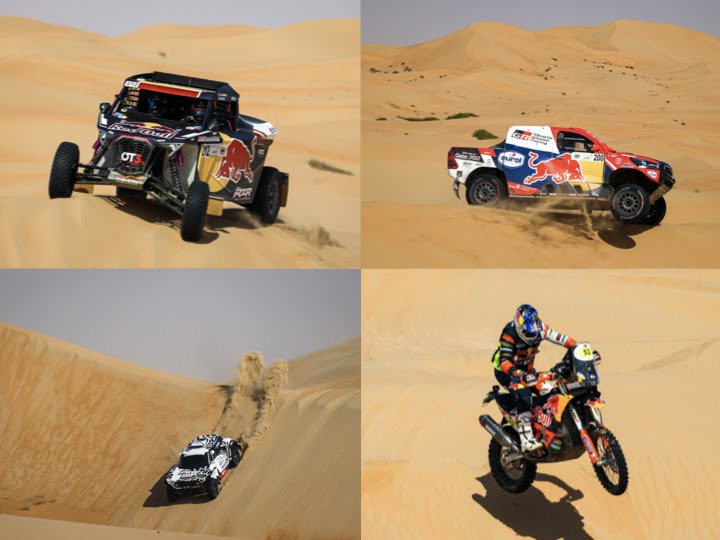 Things are hotting up at the 2021 Abu Dhabi Desert Challenge and after three long, sandy stages we’re seeing some Dakar Rally contenders making big moves. With precious FIA World Cup for Cross-Country Rallies and FIM Cross-Country Rallies World Championship points on the line, there’s still everything to play for in the dunes of the Empty Quarter.

It’s been a dominate performance so far by Nasser Al-Attiyah (QAT) and co-driver Matthieu Baumel (FRA) in the T1 car category. Victories have been secured on the opening three timed special stages, measuring 262km, 333km and 293km respectively. The Toyota duo led the World Cup for Cross-Country Rallies going in the race and will extend their advantage if they can maintain their blistering pace over the remaining two desert stages.

“Today was completely different from the beginning two stages, it was more technical with lots of big dunes.” – Nasser Al-Attiyah

Sticking closest to Al-Attiyah and Baumel so far has been the MINI JCW Buggy of Kuba Przygonski (POL) and co-driver Timo Gottschalk (GER). Przygonski – a World Cup winner himself in 2019 – finished second to Al-Attiyah on both opening stages in Abu Dhabi and took third place today. The gap between the Hilux in first place and the MINI in second stands at 11m18s.

Going for glory in the T3 category of the World Cup for Cross-Country Rallies are Cristina Gutiérrez (ESP) and co-driver François Cazalet (FRA). The Red Bull Off-Road Junior Team pair have fought back from two tricky opening stages to put themselves third overall in the T3 class.

“There are still two quite hard days and everything can change, but we are happy.” – Cristina Gutiérrez

Also representing the Red Bull Off-Road Junior Team in Abu Dhabi are the crews of Seth Quintero (USA)/Dennis Zenz (GER) and Guillaume De Mevius (BEL)/Tom Colsoul (BEL). Quintero retired from the rally on Tuesday morning as a precautionary measure due to a stiff neck sustained as a result of a heavy impact on stage three. De Mevius continues the team’s mission to prepare their 2022 spec OT3 for the upcoming Dakar Rally.

“We remain fully focused on bringing back precious development information to the bivouac and preparing 2022 the best way possible.” – Guillaume De Mevius

In the bike race Matthias Walkner (AUT) has the luxury of already having this season’s Cross-Country Rallies World Championship wrapped up. Despite this there has been no let up in pace from the Red Bull KTM Factory Racing rider. A win on Saturday’s prologue stage has been followed by podium results on the first three stages in Abu Dhabi, giving Walkner the overnight lead on Tuesday.

“There are two days left and I’m still leading the overall, so I’ll continue to do my best and take it day-by-day.” – Matthias Walkner

Daniel Sanders (AUS) is aiming to complete his rookie season with second place overall in the World Championship. Setting the fastest time on stage three has also put Sanders bang in the mix to take his first-ever rally-raid win. The GasGas Factory rider currently holds second place overall, less than a minute behind Walkner.

“It was a long day in the dunes and certainly tiring, but I’m still feeling good and looking forward to opening tomorrow.” – Daniel Sanders

Local fans have been enjoying the performance of home favourite Mohammed Balooshi (UAE) who sits eighth in the bike race following a string of Top 10 stage results.

With close to 500 kilometres against the clock still in race in Abu Dhabi there’s still scope for plenty more drama on the dunes on the remaining two stages. Stay tuned to find out who is picking up precious championship points and moving into pole position with their Dakar preparation. The winners of the 2021 Abu Dhabi Desert Challenge will be known at the end of the fifth and final stage on Thursday, November 11.

Nasser Al-Attiyah: “Today was a good stage, the third stage of the Abu Dhabi Desert Challenge. It was good to win again and I’m quite happy. Today was completely different from the beginning two stages, it was more technical with lots of big dunes. We are quite happy and I hope to keep going like this.”

Mathieu Baumel: “Today’s stage was a little bit faster and more fun than the previous two days. It was an interesting day in car, lots of concentration required on the sandy tracks and the dunes. We decided to push a little bit more because the risks were less than on the previous two days which featured lots of broken dunes. We extended our lead today and now have over 10 minutes advantage on second place.”

Cristina Gutiérrez: “Today the third stage has finally gone better. The engineers have changed something in electronics and the car is going much better so today has been a fairly clean day. There are still two quite hard days and everything can change, but we are happy”

Guillaume De Mevius: “Unfortunately, we were hindered by some mechanical issues during the 3rd stage of the Abu Dhabi Desert Challenge while we were having a great start, battling some of the T1+ cars. It’s part of the game, we remain fully focused on bringing back precious development information to the bivouac and preparing 2022 the best way possible.”

Matthias Walkner: “I had another solid day today. Finishing second again means I don’t have the best starting position for tomorrow, with not so many lines in the sand ahead of me. There have been the usual changes in the standings with different people leading out, and others have had some issues. There are two days left and I’m still leading the overall, so I’ll continue to do my best and take it day-by-day.”

Daniel Sanders: “Yeah, happy with that. It was a good stage today, I rode really well this morning and caught up to the guys ahead quicker than I thought I would. From there we just rode in a pack. It wasn’t too tricky after the refueling, we took it in turns to lead and I just made sure I didn’t make any big mistakes or crash. The day went well – I felt comfortable on the bike today and was able to relax a little, which means I could concentrate more on the road book, too. It all came together really well. It was a long day in the dunes and certainly tiring, but I’m still feeling good and looking forward to opening tomorrow. For sure, it’s not going to be easy, but it’s really good experience for me, so hopefully I’ll do a good job and not lose too much time to the others.”