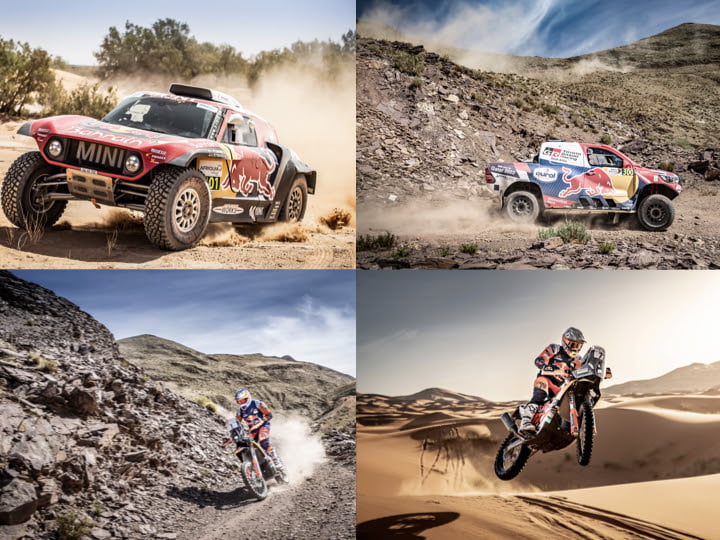 The opening stages of the 2019 Rallye du Maroc have seen one Dakar legend putting on a masterclass display. With two stage wins already it’s looking good for Nasser Al-Attiyah (QAT), but there’s still plenty of distance to run in the car category and also for the bike race.

Al-Attiyah and co-driver Mathieu Baumel (FRA) have shown unstoppable form on the first days of racing in Morocco. Stage one was won by nearly three minutes and then the second stage was won by over 12 minutes.

The reigning Dakar champions are looking to wrap up the 2019 FIA World Cup for Cross-Country Rallies during this trip to North Africa. A few more days of driving to this standard will provide them with a double celebration at the finish line.

“We didn’t make any navigation mistakes and I was really pushing because we need to see where we are. It looks like a good stage for us.” – Nasser Al-Attiyah

Al-Attiyah and Baumel’s closest rivals for this season’s World Cup are the husband and wife crew of Stéphane (FRA) and Andrea Peterhansel (GER). The married couple were back on pace in their Mini John Cooper Works Buggy on stage two after a tricky opening day. Their aim for the remaining three stages is to push Al-Attiyah’s Toyota Hilux all the way to the end.

“We’re happy to be two stages down and still in the fight to finish on the podium. The car has been great so far, no problems at all.” – Stéphane Peterhansel

It’s been a tougher start to Rallye du Maroc for the second Mini John Cooper Works Buggy crew of Carlos Sainz (ESP) and co-driver Lucas Cruz (ESP). A succession of punctures on day one was followed up by navigational errors on stage two.

“We’re testing a couple of things on the car as we go and that part of the work is going well.” – Carlos Sainz

Elsewhere in the car race, the fight for a Top 3 finish is still on for Giniel De Villiers (ZAF) and Kuba Przygoński (POL).

Over in the bike category it’s been a mix of results for the Red Bull KTM Factory Team. Freshly crowned 2019 FIM Cross-Country Rallies World Championship winner Sam Sunderland (GBR) was unable to finish stage two of Rallye du Maroc. After hurting himself on the stage, Sunderland will skip stage three but may still rejoin the race for the final two days of racing.

Leading the charge for the KTM squad is Luciano Benavides (ARG) who set the fifth fastest time of the second stage. The Argentinian biker is well on course for claiming the Junior Class trophy of this season’s FIM Cross-Country Rallies World Championship.

“I got lost for about four minutes today and after that I just tried to stay safe. I followed the group in front and was able to protect my tyres. This is important on a marathon stage.” – Luciano Benavides

There’s plenty for KTM riders Toby Price (AUS), Matthias Walkner (AUT) and Laia Sanz (ESP) to reflect on at the midway point of the bike race’s marathon stage. All three are focused on chasing down their individual goals in Morocco as well as helping the team to secure the overall win.

“There’s so many parallel pistes and roads and tracks and rios, it’s really, really difficult. It’s all a bit frustrating, but we’re all good and the bike’s good. It’s a marathon stage so we’ll see how tomorrow goes.” – Toby Price

There’s three long stages remaining at Rallye du Maroc with plenty of tough terrain for the competitors still to pass. Only when the course has been completed will the real winners be known. The final stage takes place on Wednesday, October 9.