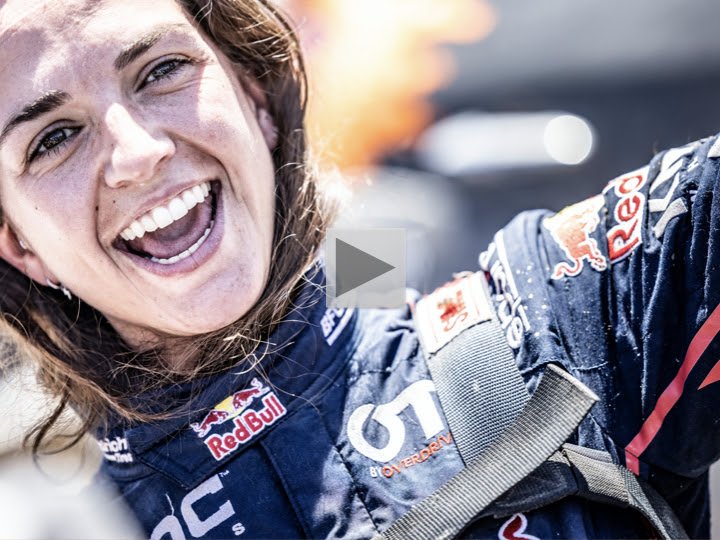 The Red Bull Off-Road Junior Team converted stage wins into a first-ever overall victory at Rally Andalucia. After winning stages at the previous two editions of the Dakar, the outright win in Spain sees the young squad take their game to the next level.

The victory of Cristina Gutiérrez is doubly sweet as it comes in her native Spain. The T3 triumph comes the same year as Gutiérrez became the first female to win a Dakar stage since the rally left Africa.

It wasn’t stage wins that gave Gutiérrez victory in Spain, it was consistency across all four stages. The Spaniard and her French co-driver Francois Cazalet finished as either runners-up or third in the T3 class on every stage in Andalucia. The final winning margin overall was in excess of 20 minutes in the T3 race, with Gutiérrez less than 15 minutes off a Top 5 finish in the T1 car class race.

“Winning a World Championship race is a dream for me. This victory is dedicated to the entire team.” – Cristina Gutiérrez

There were strong performances from the other three Junior Team crews entered into the rally across the week. This included two stage wins for 18-year-old Seth Quintero. The American teenager and his German co-driver Dennis Zenz set the fastest T3 times on both the first and final stage at Rally Andalucia. Quintero would have doubtless been contesting the win with team-mate Gutiérrez had a gearbox issue not prevented him from racing stage two.

“We’ve learned a lot at this rally and we ended up winning two out of four stages.” – Seth Quintero

Junior Team newcomer Guillaume de Mevius made a big impression on his first outing in the OT3. The all-Belgian crew of De Mevius and co-driver Tom Colsoul were leading the T3 class going into the final stage of the rally. Ultimately it was a broken gearbox at the beginning of stage four that cost De Mevius a truly memorable result on his Junior Team debut. However, the rookie’s stage wins proved he has the pace to compete with the very best this year.

It was also a week that ended in frustration for Mitch Guthrie Jr. as the American suffered similar mechanical issues to his team-mates Quintero and De Mevius. Guthrie Jr. and his Norwegian co-driver Ola Floene had fought their way back to the podium after a tough start to rally. The duo will be targeting a more consistent performance when they suit up next time for the Red Bull Off-Road Junior Team.

“Overall we didn’t get the result we wanted but these things happen in racing and we’ll be back.” – Mitch Guthrie Jr.

Rally Andalucia was round one of the seven round 2021 FIA World Cup for Cross-Country-Rallies. Next up is Rally Kazakhstan which takes place June 7-13.

Cristina Gutiérrez: “I’m so happy to be here at the finish line. It’s so nice to share this moment with all the team. Today has been a special day for me. Finally after a hard week of avoiding mistakes we managed to win the T3 category. Once again Rally Andalucia remains an important race for me. Winning a World Championship race is a dream for me. This victory is dedicated to the entire team.”

Seth Quintero: “Today went really well. We started off really strong before a little mistake about 30km into the stage that cost us a minute or two. After that we just tried to charge on from there. It looks like we ended up getting the win in T3 today by a few minutes. We were also the third or fourth car overall. We’ve learned a lot at this rally and we ended up winning two out of four stages. It obviously wasn’t the final result we wanted, but we’ll be back next year to contend for the win.”

Mitch Guthrie Jr.: “We going well on stage four and posting some good split times. Everything was coming together. Unfortunately with about 20 kilometres left our gearbox let go. We still had fourth gear thankfully so we were able to keep rolling. Then we came up to a mud hole and fourth gear couldn’t quite get through it so we got stuck there. Eventually we got towed out of there and towed back to the finish. Overall we didn’t get the result we wanted but these things happen in racing and we’ll be back.”