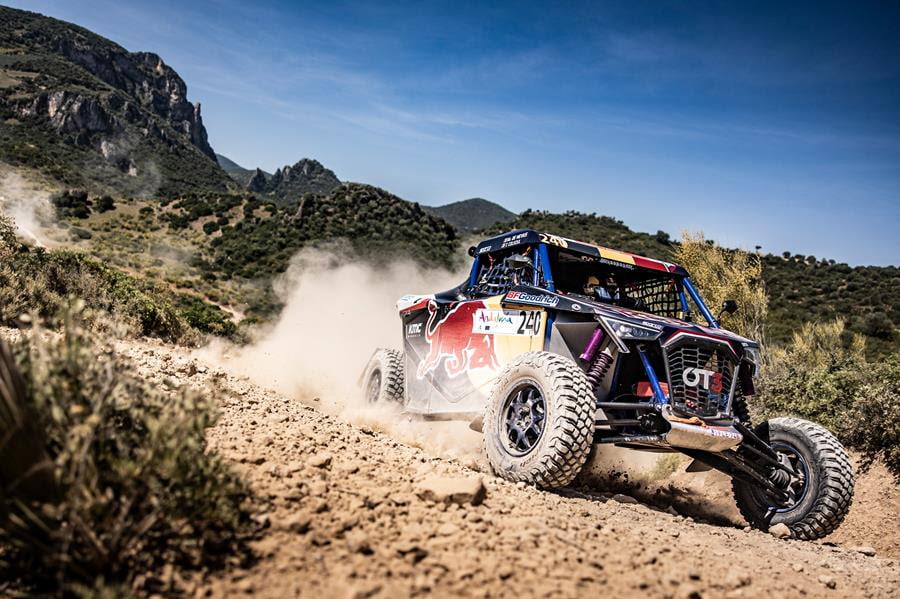 The Red Bull Off-Road Junior Team have made a red hot start to their latest adventure. At the halfway point of Rally Andalucia the squad have picked up stage wins every single day of the race so far, including a 1-2-3 finish today!

Among the changes for the Junior Team at the start of this latest FIA World Cup for Cross-Country Rallies season was the introduction of a new driver. 26-year-old Belgian ace Guillaume de Mevius has been enjoying an impressive debut drive in one of the four OT3 machines racing in Spain.

De Mevius and co-driver Tom Colsoul not only won the T3 class on the 8-kilometre prologue stage, but they finished just 11 seconds back from three-time Dakar winner Nasser Al-Attiyah’s Toyota Hilux.

The all-Belgian crew were back on top during the second special stage in southern Spain. The duo attacked all 279 kilometres of the stage to set the day’s fastest T3 time and the sixth fastest time overall. De Mevius now leads the T3 category overall.

“We have to stay concentrated. Today was a good day, but we also want tomorrow to be a good day as well.” – Guillaume de Mevius

Victory in the T3 class on the first timed special stage at Rally Andalucia went to Seth Quintero. The youngest ever stage winner in the history of the Dakar showed phenomenal speed during 177 kilometres against the clock.

Quintero finished stage one just five minutes behind T1 leader Al-Attiyah and in P6 overall. This could have been a week that ended with an overall T3 victory for Quintero and co-driver Dennis Zenz. However, those hopes vanished when gearbox trouble saw the 18-year-old American unable to start stage two.

“We haven’t had the best of luck at this race but hopefully we can turn that luck around on stages three and four.” – Seth Quintero

A P7 overall result for Cristina Gutiérrez on stage one, backed up by a T3 podium finish on stage two, has given the 29-year-old a great platform in her native Spain. The only female stage winner at the Dakar since the rally left Africa will be pushing for top spot this weekend alongside co-driver Francois Cazalet.

“We have to continue fighting tomorrow and the day after that.” – Cristina Gutiérrez

Mitch Guthrie Jr. still has it all to play for in Spain despite colliding with a rock, resulting in flat tyre and a broken A-arm, on stage one. The 24-year-old American was right back on pace on stage two where he and co-driver Ola Floene leapt from 7th to an overall podium spot in the T3 classification.

Still to come at Rally Andalucia is Saturday’s 315-kilometre timed special stage, the longest day of the entire race. The chequered flag comes down on Sunday following the fourth and final stage, measuring 285 kilometres.

Guillaume de Mevius: “Today we had the best time in the T3 class so that’s very nice. Also we took back the lead. The relationship with Tom is improving and we’re working well together. The car was perfect today. I’m really happy with how everything is within the team.”

“There are still two days to go. I’m looking forward to getting to the finish line. This is still the most important thing for me. We have to stay concentrated. Today was a good day, but we also want tomorrow to be a good day as well.”

Seth Quintero: “We took off from the bivouac this morning and all was good. We were due to start first in class today after winning yesterday’s stage and finishing 6th overall. We got out at the end of the liaison and saw some oil so we pulled a few panels off the car. We saw that there was a hole in the gearbox. We had to call it right there so unfortunately we did not get to race stage two.”

“We’re hoping to restart again tomorrow. We haven’t had the best of luck at this race but hopefully we can turn that luck around on stages three and four. We’ll try to get two more stage wins before we leave.”

Cristina Gutiérrez: “Today was a little difficult for us. We had several mistakes at the beginning of the stage. We will learn from these mistakes and get stronger.”

“There were also positives today. We stay second in the T3 rankings and ninth in the general classification. We have to continue fighting tomorrow and the day after that.”

Mitch Guthrie Jr.: “I had a great day here at Rally Andalucia on stage two. Unfortunately yesterday we had some issues. Today we started 30th and ate some dust, but we still managed to get by a good amount of cars. Then we had a nice gap in front of us for the second half of the stage and were able to push hard.”

“I think I ended up as second T3 and somewhere around 12th overall. We’re feeling good and tomorrow we have a great starting position for stage three. Can’t wait to get her done.”