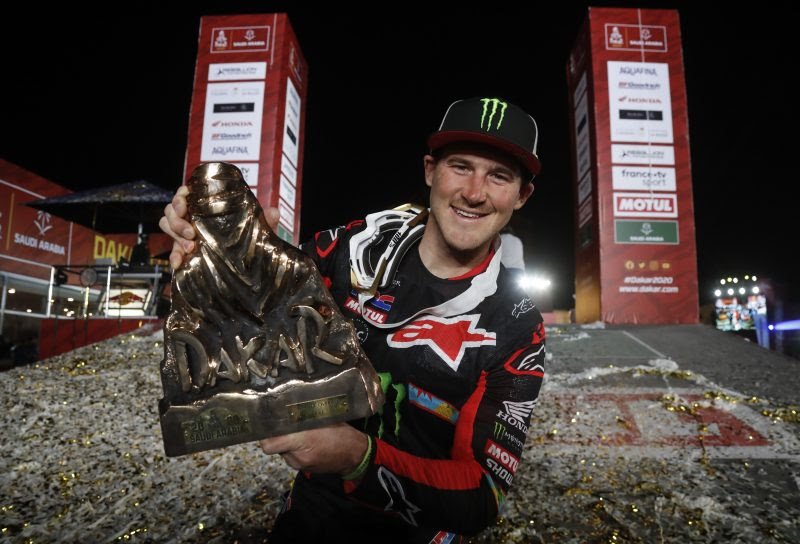 After Africa and South America, the most recent chapter of Dakar Rally history, in the Middle East, has opened, adorned in the colours of Monster Energy Honda Team and American Ricky Brabec as the leading race protagonists.

The vast and unchartered desert of Saudi Arabia has, for a fortnight, proved ideal ground for the Monster Energy Honda Team show of strength in the toughest, most demanding race in the world. Through eleventh gruelling stages, the Honda CRF450 RALLY riders stole the show over 5000 kilometres of timed specials, to eventually claim a haul of six stage wins, after leading the race from day three.

American rider Ricky Brabec claimed two stages, as did Chilean José Ignacio Cornejo, while Spaniard Joan Barreda triumphed in stage 10 and Argentinean Kevin Benavides took the top honours in stage 7. The team were accompanied by South African Aaron Maré, who was forced to abandon the race after a fall in the first stage. The historical win for Honda comes eight years after the marque’s return to the Dakar odyssey, a period during which the team had narrowly missed out on the top prize on several occasions.

The achievement has been the fruit of hard work done throughout the season, during participations in the FIM World Cross-Country Rallies Championship and in multiple tests and trials. The team’s success is the culmination of a year-long endeavour, that now earns them the well-deserved tag of ‘Dakar winners’.

The team will return to action shortly. The mechanics will prepare the machines and the riders will be back in the saddle of the Honda CRF450 RALLY to continue the on-track battle, but first the team will get a well-earned break before the 2020 World Championship gets fully underway.

As the dust settles on the event, Honda and HRC cannot forget the hugely important role that Portuguese rider Paulo Gonçalves played in this endeavour. ‘Speedy’, who was a member of the team from mid-2013 to 2019, suffered a fatal accident in stage 8. Gonçalves, who achieved runner-up spot with the team in the 2015 edition, will be remembered by the team for his professionalism and great courage on the track.

I’m very happy. It has been a good Dakar Rally 2020 in Saudi Arabia, where it has ended up being a great race. The team has done a great job, especially Ricky, very consistent, helping Honda achieve its final goal. Every year, since our first participation in 2013, we have been improving step by step and finally the expected victory has come thanks to the great work of the whole team. I want to thank the trust of our sponsors, everyone at Honda and the fans who have supported us at all times.

This is a great result for Honda who have been trying to achieve this target since 2013. We have to thank everybody who has been involved in this project since then. Especially Paulo Goncalves who was a great professional and a good rider. We wish to thank him and I would like to dedicate this result to him. Also, we wish to thank all the people who support us, the sponsors and everyone else involved. We have reached the target, but we are still challengers. Now we can rest, but tomorrow will begin to work once again towards next year’s target.