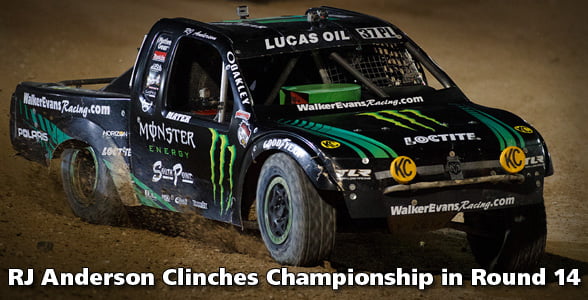 The Lucas Oil Off Road Racing Series made its way back to Las Vegas Motor Speedway for Round 14 of the 15 Round race series. Pro 4 Unlimited series points leader Kyle LeDuc came to Vegas with a vengeance. After starting the year off with six consecutive race wins, LeDuc struggled to keep his groove in Round 7. Fast-forward to Las Vegas Motor Speedway Round 14 and Kyle was out for blood after coming up lame in Round 13.

Kyle LeDuc led the majority of Round 14 in typical LeDuc fashion until a caution flag came out just after Carey Hart was being towed off the track. At the restart, LeDuc jumped to an early lead just as he did all race long, but that lead would be short lived. LeDuc caught a rut going into turn 5 and caused his truck to bicycle and sent the Pro 4 Unlimited number 99 heading straight towards a k-rail. This allowed older brother Todd plenty of room to take advantage of the opportunity at hand putting Todd LeDuc in the first place position. Just two corners later Kyle LeDuc suffered a mechanical failure and opened the door once again, allowing Corry Weller to move into the second place position; bumping Kyle LeDuc back to third place.

Todd LeDuc had been running dead even lap times with younger brother Kyle LeDuc all race long but with just one lap remaining he was able to capitalize on Kyle’s misfortune and take his first career win in Pro 4. Corry Weller would see her first second place podium of 2012 and Kyle LeDuc would have to settle for a third place here in Las Vegas. The Pro 4 Unlimited points championship will come down to the last race of the season (Round 15) at Firebird Raceway in Phoenix Arizona, with brothers Kyle LeDuc and Todd LeDuc neck and neck in the quest for a championship.

True to form, Pro Lite Unlimited racing action was filled with intense racing and tons of drama. Starting on the pole for the first time this weekend, RJ Anderson (the series points leader) had everything to loose.

“I knew I had to run a clean race, just smooth and consistent without any mistakes in order to take this championship. I had so much going through my head, all I could think about was not throwing it away” commented Anderson.

With an impressive run all season long, Anderson led the field of Pro Lite Unlimited wire to wire to the checkered flag. Despite a couple yellow flags and caution laps due to over turned trucks, Anderson was able to keep his composure and hold off Monster Energy teammate Casey Currie to take the win. Currie tried everything he could to get around Anderson but nothing seemed to stick, all race long. Joining the Monster Energy duo on the podium was that of Ryan Beat (LOORRS championship runner up).

Pro 2 Unlimited racing action provided the sold out crowd at Las Vegas Motor Speedway with some of the best racing of the weekend. One of the most impressive runs in the history of the Lucas Oil Off Road Racing Series and one that Marty Hart will never forget could quite possibly be from Round 14 of the 2012 Lucas Oil Off Road Racing Series. Hart started dead last on the starting grid and was forced to work his way through the field to get anywhere near the top contenders. With Deegan and MacCachren close in points, Hart knew he had to do all he could in order to keep him in the points chase. As if working your way to the front of the field in the most competitive classes isn’t enough, Hart received a black flag and was sent to the rear of the field for a second time in the same race.

“The Cowboy” Marty Hart has always been known for his determination and true grit but nobody (not even Marty) expected to witness what took place in Round 14. Marty Hart was able to battle his way tirelessly through the field and with 2 laps remaining he was able to secure a solid second place finish right behind Carl Renezeder (who went 3 for 4 in wins here in Las Vegas). Rob “Fig” Naughton continued his momentum on the podium leading the majority of the race but would have to settle for a third place finish after his fatigued truck would feel the heat from the rest of the field.

It was a weekend of “firsts”: RJ Anderson wins his first Pro Lite title, Todd LeDuc see’s the first place position for the first time in 2012, Hailie Deegan got her first win in Trophy Kart, Ryan “Fluffer” Hagy got his first victory in Superlite, and Carl Renezeder got to his 100th win milestone.

With just one round left, there is sure to be a war among racers going into Round 15 at Firebird Raceway in Phoenix Arizona. The points battle in Pro 2 Unlimited and Pro 4 Unlimited is so tight it’s anybody’s game and the gloves are coming off on October 27th.