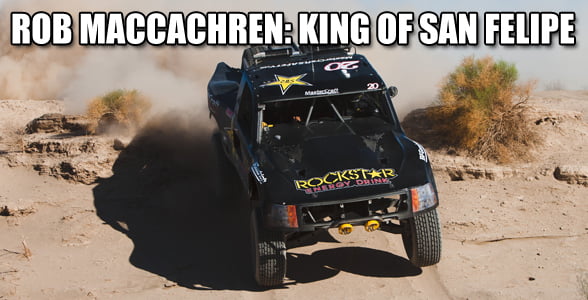 Rob MacCachren showed everyone this past week that when your drivers education teacher told you to keep two hands on the wheel, it actually slows you down.  Coming off a broken collar bone after a rollover in his Pro 2 truck a month back at Glen Helen, MacCachren not only reached the podium last week out in Crandon, but also took the overall win in his Trophy Truck today at the SCORE San Felipe Challenge of Champions race.   Also impressive is that he won this same race back in March, but nearly 5 minutes slower then his winning time of today.  Tavo Vildosola led most of the race only to be slowed down by a hub issue at race mile 196, allowing Rob Mac gain the lead again.

In Class 1 Dan McMillin who teamed up with Chuck Hovey once again took the top spot in their respective class.  Both drivers are coming off impressive showings at the BITD Vegas 2 Reno race where Hovey grabbed a top 5, and Dan finished in the Top 10 at his first stab at racing a Trophy Truck with his dad Mark.  Coming in second place was the always fast Letner Racing who had the lead but was forced to drive the last 30 miles with no power steering slowing them down.

The real winner in San Felipe were Gatorade and water bottle companies as the heat took its toll on everyone.  Contingency on Friday was a ghost town most of the day with very little vendors, and everyone rushing through to get their cars past tech to stay out of the heat.  With temps reaching over 100 in town and humidity at 40% people stayed inside, in the pool, or at the bar to keep cool.  On race day the usual overpopulated Zoo Road was probably only at 40% capacity.   Other popular spectating spots on the course also had less spectators, leading people to wonder is the lack of spectators due to the high heat or because of the lack of entries?

– Jesse Ashcraft was in third place in Trophy Truck when rolled the truck at race mile 248.  Medical help was requested for the codriver but was later canceled.
– Caspino was stuck on the dry lake bed for a while as they could be heard on Weatherman asking for help repeatedly.
– Andy McMillin sat this one out in his Trophy Truck but shared driving duties with his older sister Jessica in the protruct.  Word on the street is that he is selling the Trophy Truck to get another Protruck.  Not really.
– Justin Davis threw a fan belt and had power steering issues slowing him down off the start.
– CTR Trophy Truck cracked oil pan.
– Bad Apple Racing blew a motor.
– Their seemed to be more Ford Raptors in town then race entires.

Jason Zindroski
I Liked
i think that the low spectators was due to the fact that not a lot of peolple knew about it with ample amount of time for planning. lack of promotional banners etc.
Great driving Rob, and another great race for Mastercraft, Rockstar and Impact Racing!!! Keep adding up those points.
A lot of effort for 6 hours in oven, see you in Nov. or March
I could not get anyone to go with me because of the heat. It's been a long summer in the IV. I might have even scored a hotel room. Hopefully the push it back a few weeks next year.
Next race open a new category: Stock Raptor Super Truck. Maybe if you put them to race contingency will be more populated...
I think because of the lack of spectators was part of the heat and the power outage from the night before. I noticed not many sponsors here this time around.
Hey it was a great race . The weather the morning of the race was great . I got up at 5 am to 70 something weather it was the best morning in months. We talked about the race and we came up with it was like a high dollar CODE race but was fun and I am sure next year will be even better .