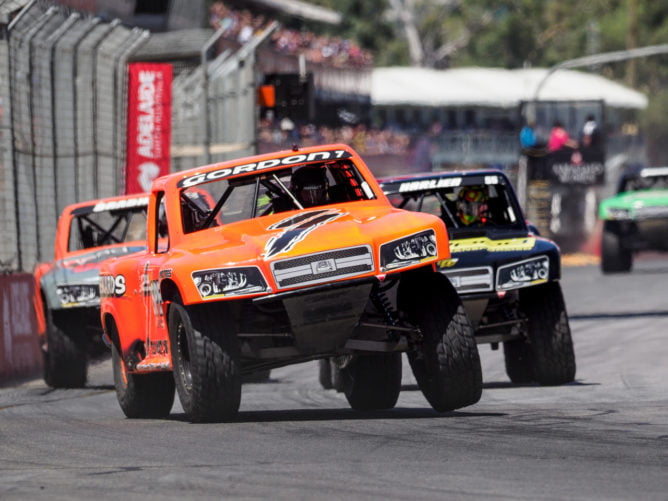 Pole sitter Toby Price of Singeton, New South Whales driving the McDonalds/ Ramsey Brothers truck would benefit from a poor finish on Friday to start up front in Round 2.

From the wave of the green flag Price wasted no time jumping out to the early lead, but it did not take Orange, California driver Robby Gordon long to pressure him for the top.

The two competitors would race side by side with close hard racing for multiple laps running away from the rest of the field before Gordon would find an opening to move past for the lead on Lap-3. Gordon would drag race Price down the long straightaway to move in front of him entering Turn-10.

However the driver on the move was Gavin Harlien of Mesa, Arizona driving the Road Pod Transport Transformed truck, as he would work his way thru the field from the seventh starting position to challenge Price for second.

At the start of Lap-4 Harlien would find an opening over the front stretch ramps to move past Price just before the chicane to move into second behind Gordon. Price would battle back, but would not be able to move back past Harlien as Gordon would begin to pull away from the field.

The next lap would see Price would loose the handle on his McDonald’s truck in the corner on Lap-5 loosing multiple positions, and loosing all sights of the leads trucks.

Gold Coast, Queensland driver Matt Brabham would move past the spinning Price truck to slide into the third position, as he would immediately attempt to pressure Harlien for second.

Gordon would have the best seat to view an epic battle unfolding behind him with good clean hard racing between Harlien and Brabham for multiple laps.

Harlien would try his hardest to catch Gordon on the last lap trying everything he could to work his way past, but the savvy off-road and road race veteran was just too fast on this day.

Gordon would capture his first victory of the 2018 season, ahead of second finishing Gavin Harlien whom re deem himself from a poor finish in Friday’s opening race. Matt Brabham would take the third position rounding out the podium for the second straight day.

Following Saturday’s third race of the season, Gordon wanted to give a special thanks to the hard working Stadium SUPER Trucks technicians who have been battling various mechanicals on the SPEED Energy/ Toyo Tires truck the last few days.

Yesterdays winner Cole Potts of Scottsdale, Arizona; driving the HallmarkTrust.com truck would get bounced around mid back throughout the race and would never advance getting credit with the eighth spot. Getting in a tangle late in the race for the second day, Blade Hildenbrand of Yucca Valley, California; driving the VP Racing Lubricants & Fuel/ HeatWave truck would finish in the ninth position.

Race No. 2 pole sitter Toby Price of Singleton, New South Whales would lead the first two laps of the event in a tremendous battle with Robby Gordon before going wide in a corner, and spinning out loosing tremendous ground to the lead pack. Price would run out of time to recover and would go on to finish the eight lap event in the tenth position.

Bill Hynes of Nazareth, Pennsylvania driving the LIVE/ United Fiber and Data entry would be recorded in the eleventh position.

After spun into the wall early in the event Phoenix, Arizona driver Jeff Hoffman driving the LIVE No. 47 would loose a large amount of track position and would never catch the pack again. Hoffman would be credited with the twelfth and final position.

The SST trucks will return to the Adelaide Street Circuit for the third and final round of the Adelaide 500 on Sunday at 2:20 pm local time prior to the Supercars race in front of another capacity crowd.

Tickets for this weekend’s Adelaide 500 event are still available for purchase by visiting https://www.adelaide500.com.au/ticketing

Other than the trucks launching 20 feet in the air covering distances more than 150 feet, what sets the SST program apart from other series is the fact that all the SST trucks are identically prepared and delivered to drivers in race-ready condition. Race winners are decided by driver skill rather than individual team engineering and budgets. Drivers and their personal mechanics are assigned specific SST mechanics who together tune and make minor adjustments to the 600-horsepower trucks.
P
RDC