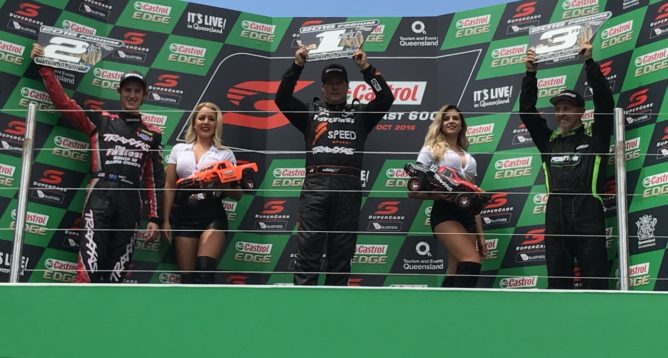 Positive Quality Trailers/ Savino Del Bene/ Thor Demolition driver Shaun Richardson of Scunthorpe, United Kingdom in just his fourth SST start would finish in the third position, after an incredible battle with Arctic Cat/KTM Australia driver Toby Price. Price’s truck would break on the last lap, but he would still be able to limp it home to a fourth place finish.

As more than 50,000 spectators lined the 15-turn 1.85-mile (2.98 km) beach side street circuit on Saturday to watch 12 TRAXXAS-branded trucks launch off of man-made ramps on the same DOT-approved Toyo Tires that consumers can buy. The loud raucous cheers of disbelief from the massive Australian crowd could be heard over the trucks as fans of traditional Supercar racing saw the trucks literally fly through the air side by side and on occasion on top of one another as we saw in Friday’s opening event.

Friday’s winner in Race 1 of the Gold Coast 600 Sheldon Creed of El Cajon, Calif. would start in the twelfth position, and waste no time moving to the front of the field. By Lap-2 Creed was up to the second position battling for the lead with early leader Penola, South Australia, Aus.; driver Greg Gartner. By Lap-4 Creed would apply heavy pressure to Gartner and look under him to grab the lead.

On the restart of the competition caution Orange, Calif.; driver Robby Gordon driving the Hot Wheels/Toyo Tires truck for injured SST driver Matt Mingay would drag race past Creed for the lead down the front straightaway. As Creed would duck in behind Gordon he would start to loose power under the hood of his TRAXXAS machine, Creed would fall back truck after truck would move past him in the running order.

Gold Coast, Queensland, Aus.; driver Matt Brabham would follow Gordon past Creed and look to contend for the lead from Gordon. However, Brabham would have no match for Gordon as would work his way to an extensive lead the rest of the race.

The real race was for the third position as 2015 Dakar 2-wheel Champion Toby Price of Singleton, New South Wales, Aus.; and Shaun Richardson traded the position multiple times in the closing laps of the event until Price’s truck would break allowing Richardson to hold the spot solely.

Gordon would go on to capture the win in the 12-lap event ahead of Brabham, and Richardson who would claim his first SST podium.

Limping his truck home to a sixth place with a alternator that broke off the mounts Sheldon Creed would gain valuable points in the SST World Championship race with fellow TRAXXAS teammate Matt Brabham.

Pacific Pines, Queensland, Aus.; driver Matty Nolan driving the Haymans Electrical Wholesaler truck would start the race in the third position, but that would not last long. After settling into the second position on Lap-1, Nolan would make contact with Toby Price entering the temporary chicane and would completely blow apart all the barriers. Under USAC rules and regulations any driver to touch the chicane would be penalized and sent to the back of the field. After a full course caution to re-set the barriers Nolan would encounter mechanical issues a few laps later and would pull into the pit lane and not finish the event. Nolan would go on to be credited with the seventh position.

Royal Purple Synthetic Oil driver P.J. Jones of Scottsdale, Arizona after having a wild finish with Matt Brabham for second place a day previous would start Saturday’s race in the eleventh position. Remaining patient for the first portion of the race avoiding the hornet’s nest in front of him Jones would be able to advance to the fifth spot by Lap-6. However, that would be the highlight of Jones day as the No. 30 would encounter mechanical issues on Lap-8 and would not finish. Jones would go on to be recorded in the eighth spot.

Greg Gartner of Penola, South Australia would experience power steering issues with his R&J Batteries/Fuchs/Delkor Calcium Battery truck during morning practice. However, with not enough time to fix the issue, Gartner would jump into the vacant truck of Adelaide, South Australia, Aus.; driver Craig Dontas at the last moment.

From the wave of the green flag Gartner would jump out to the early lead from the second starting position, and pace the field for three laps prior to getting past. On Lap-6 the Gartner truck would begin to slow on track with an issue. Eventually would pull into the pit lane prior to the completion of the race. Gartner would go on to be credited with the ninth position.

Pole sitter Paul Morris of Norwell, Queensland, Aus.; would encounter mechanical failure on Lap-1 of the race and would pull the SuperCheap Auto/Hungry Jack’s truck onto the pit lane and observe the rest of the 12-lap event.

After experiencing a practice accident where teammate Paul Morris suffered a brake issue, Sara Price of Canyon Lake, Calif.; went for a wild ride into the tire barriers damaging her SuperCheap Auto/Coffee Sisters truck. CAMS officials after post race inspection determined the fuel cell had enough damage to it where it was not safe to compete in the race. With not enough time to switch out fuel cells, S. Price would be sidelined for the second SST event.

Adelaide, South Australia driver Craig Dontas whom is doing double duty this weekend competing in the V8 Ute division and the Stadium SUPER Trucks for the first time would be involved in a hard accident in the V8 Ute race and would be cleared from CAMS medical staff in enough time to make the SST starting time. Similar to S. Price, Dontas would watch the SST event from the sidelines.

The third and final race of the Gold Coast 600 weekend for the SPEED Energy Stadium SUPER Trucks Presented by TRAXXAS will take place Sunday afternoon at 12:15 p.m. local time in front of another anticipated massive crowd.

The SST trucks will race a third and final round Sunday afternoon in front of another anticipated massive crowd at 12:15 p.m. local time.

Tickets for the final day of the Gold Coast 600 are still available for purchase by visiting http://www.supercars.com/gold-coast/tickets/. 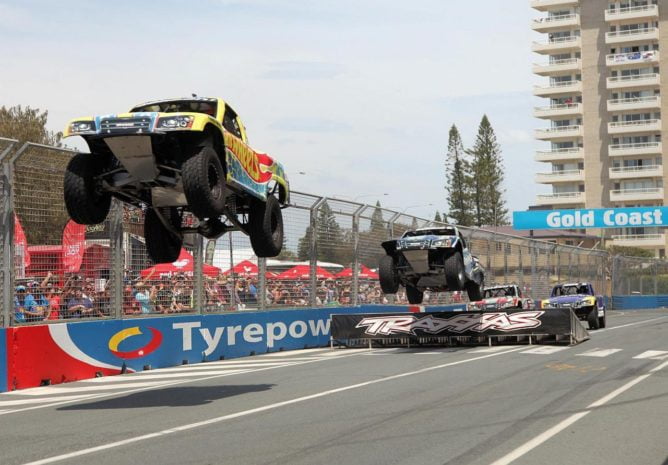