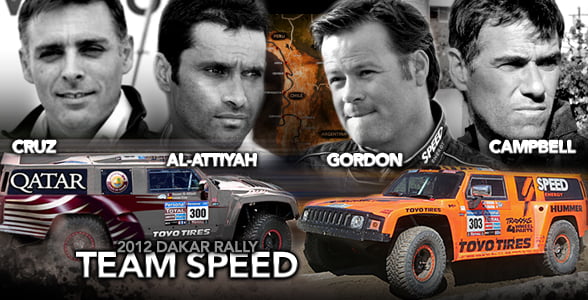 Charlotte, N.C. (December 8, 2011) – Robby Gordon and the SPEED Energy/Toyo Tires team announce the addition of off-road legend, Johnny Campbell to the 2012 team.  Johnny Campbell will serve as Gordon’s navigator during the 2012 edition of the infamous Dakar Rally. Campbell will be responsible for directing Gordon through the 6,000-mile pan-American journey that is different than years past, which will add to the allure of the grueling race. The 14-day racing event will starting on New Year’s Day in Mar Del Plata, Argentina, cross over the Andes of Chile and then finish in country of Peru. Both the route and terrain will be different than years’ past, making Campbell one of the most important team members.

The Southern Californian 2-wheel racer is most known for his multiple Baja 1000 victories. This will be his second entry in the Dakar Rally and his first on to the South American continent as a navigator.  Campbell, age 40, finished 8th overall and1st as a privateer during the 2001 Dakar Rally, bringing an impressive resume to Robby Gordon’s SPEED Energy/Toyo Tires team. With a total of 16 Baja wins – 5 Baja 500 and 11 Baja 1000 –  Campbell not only brings along a tradition of success but a great deal of experience when it comes to reading the desert terrain.  Campbell’s ability will be key to Gordon’s success as the two look for their first Dakar Rally overall win in 2012.

“I have always said that I would return to conquer the Dakar Rally when the right opportunity presented itself. When I got the call from Robby, I knew that time had come. To be partnered with one of motorsports all-time legends, his great team and awesome equipment is a dream come true. I am very excited and looking forward to the challenge of navigating the Speed Energy / Toyo Tires team to the top of the podium,” commented Johnny Campbell.

“Having Johnny Campbell join our team is a real honor. Having 11 Baja 1000 victories and finishing the Dakar Rally in 2001 on a motorcycle, he understands what it takes to be successful and competitive.  Not only will he be an asset on the car side, he also brings a level of professionalism to our team given his managerial background, which is only going to make our team that much stronger this year. He is a true champion, and I am excited to have him as part of this year’s Dakar Rally team,” commented Robby Gordon.

Charlotte, N.C. (December 6, 2011) – Winner of the 2011 Dakar Rally, Nasser Al-Attiyah confirmed that he will join Robby Gordon and his off-road team in the 2012 edition of the Dakar Rally. Driving one of the highly-modified HUMMERs sponsored by his native country of Qatar, Al-Attiyah will compete for his second consecutive overall Dakar Rally victory.  Should he conquer the South American desert once again, he will be only the second driver to triumph in two different manufactures; Ari Vatanen did so in 1990-1991.

Al-Attiyah has an impressive racing resume and is an accomplished cross-country and classic rally racer. He has won seven FIA Middle East Rally Championships titles since 2003 and collected 13 stage wins in the infamous Dakar Rally from 2009 to 2011.

“Teaming with Robby Gordon and driving a HUMMER is fantastic because it’s a new challenge for me. I’m proud of being able to represent Qatar in this year’s Dakar Rally,” Al-Attiyah said.

Lucas Cruz, who sat alongside Al-Attiyah for the 2011 Dakar win, will once again be his co-driver.

“To have Nasser as a teammate in this year’s Dakar Rally is a huge boost for our team. He brings the excitement and experience of a champion to our team. I personally take it as an honor that he chose our team to defend his 2011 overall win. Between my SPEED Energy HUMMER and his Qatar HUMMER, we have a strong team, cars, and drivers capable of winning the Rally,” commented Robby Gordon.

F
RDC
I think they will make an awesome team for victory
I wish them the best of luck!! This will be a team to follow good luck JC &amp; RG
good luck at dakar
Great Team ...Great driver...go to Dakar
I am absolutely thrilled at the potential for a double 2012 Podium for Team Gordon.