After reports of driver malfeasance came in to SCORE officials, and the footage to back up those reports, race officials needed a couple days to chew on it before issuing official results for the 53rd SCORE Baja 500. Emerging on top was the Baja Jerky Trophy Truck of Larry Roeseler. The wily veteran who many call “Mr. Baja” put yet another impressive victory on his lengthy resume. The latest Baja 500 win puts Roeseler’s tally at 12, (9 on bikes, and 3 in four-wheeled vehicles). The next closest driver to matching that feat is Ivan “Ironman” Stewart who has 10 Baja 500 wins. The third most wins goes to yet another off road racing icon, “lightning” Larry Ragland with 5. 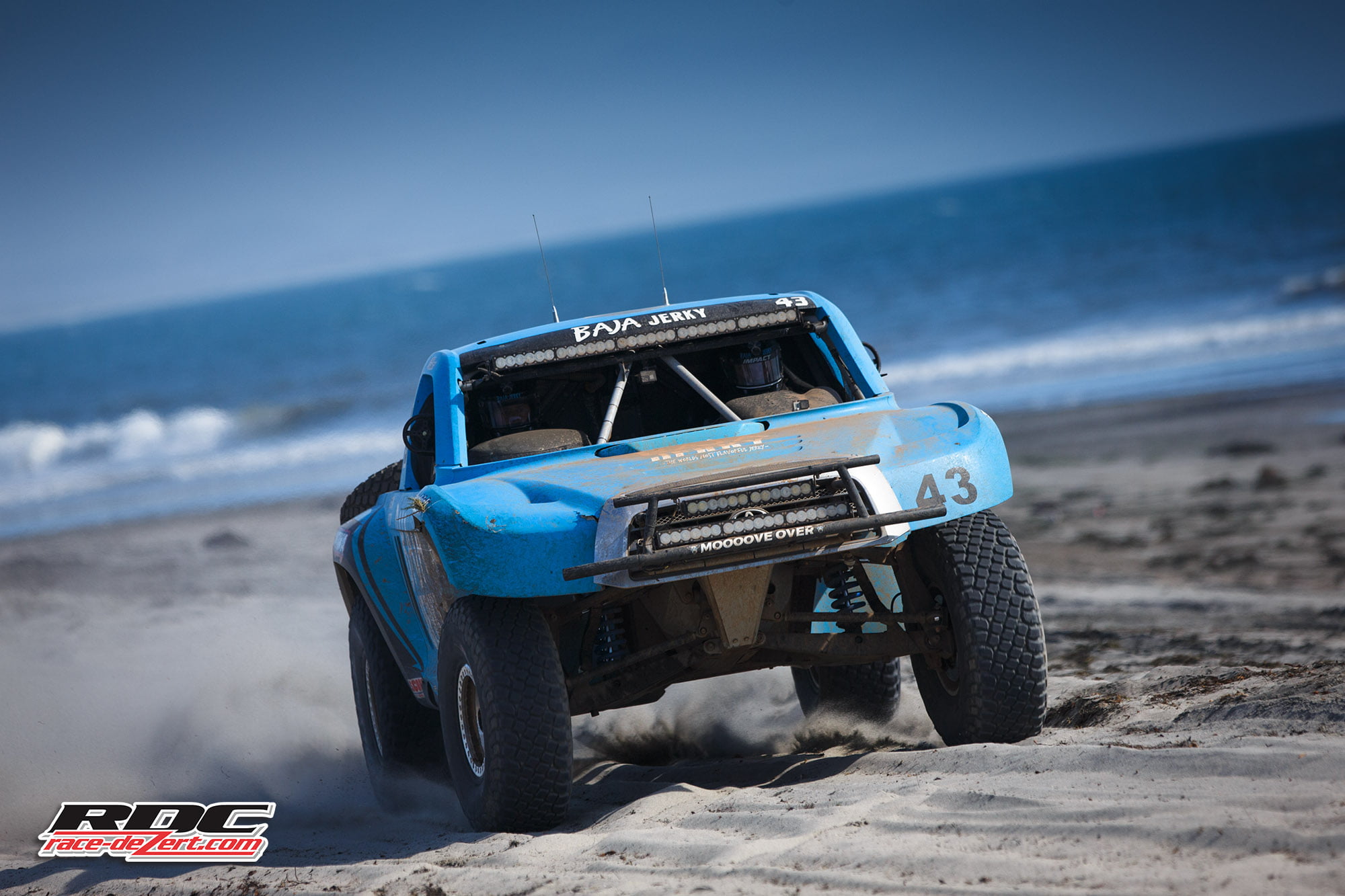 Thinking he had finished 3rd, Larry Roeseler commented at the finish. “We knew it would be tough. I knew it would be ten hours, but it was every bit of what we expected, it was fantastic. I bet no one was disappointed. There were some good battles out there. There were places we were doing 130, and there were places we were doing two miles per hour; just because of the rocks. We started tenth, and just kept pushing. I went back, and forth with John T. Lennon (No. 73) a couple of times, and then Ampudia (Alan Ampudia, No. 10) crashed, Tavo (Gustavo ‘Tavo’ Vildosola Jr, No. 21) got a flat, and we saw Menzies (Bryce Menzies, No. 7) on the pit around mile 300, and we realized we were fourth. We had no flats and didn’t do anything to the truck outside of sliding off the road a few times. It was just a very memorable race for us. My very first SCORE Baja 500 was in 1972. I rode a 175cc. and here I am, over 40 years later, and still hitting it. This is a very respectable finish and we’re really, really happy.”

Although penalties had an effect on the overall results, they weren’t the only deciding factor in the race; the course was absolutely ruthless. Much of it was on narrow twisty trails that clung to the sides of steep cliffs. To make matters worse, they were also comprised of loose rocks, large boulders, and silt. Stuck vehicles blocking the road in these sections spelled doom for many competitors. Bottlenecks occurred due to vehicles with broken suspensions, and steering, or those stuck in the silt. Some managed to avoid the bottlenecks, while others simply persevered through the chaos to get to the finish line. Out of the 240 entries that started, 89 failed to finish within the allotted time.

The final vehicle to take the checkered flag was number 1196 Alex Gonzales. He overcame huge odds, and the same terrain that crushed many of the most capable unlimited vehicles. He got his stock Volkswagen up on the finishing podium after 20 hours, 58 minutes, and 59.746 seconds of racing. Considering the highly limited nature of his race car, his win was just as impressive as those who finished the course in half the time. 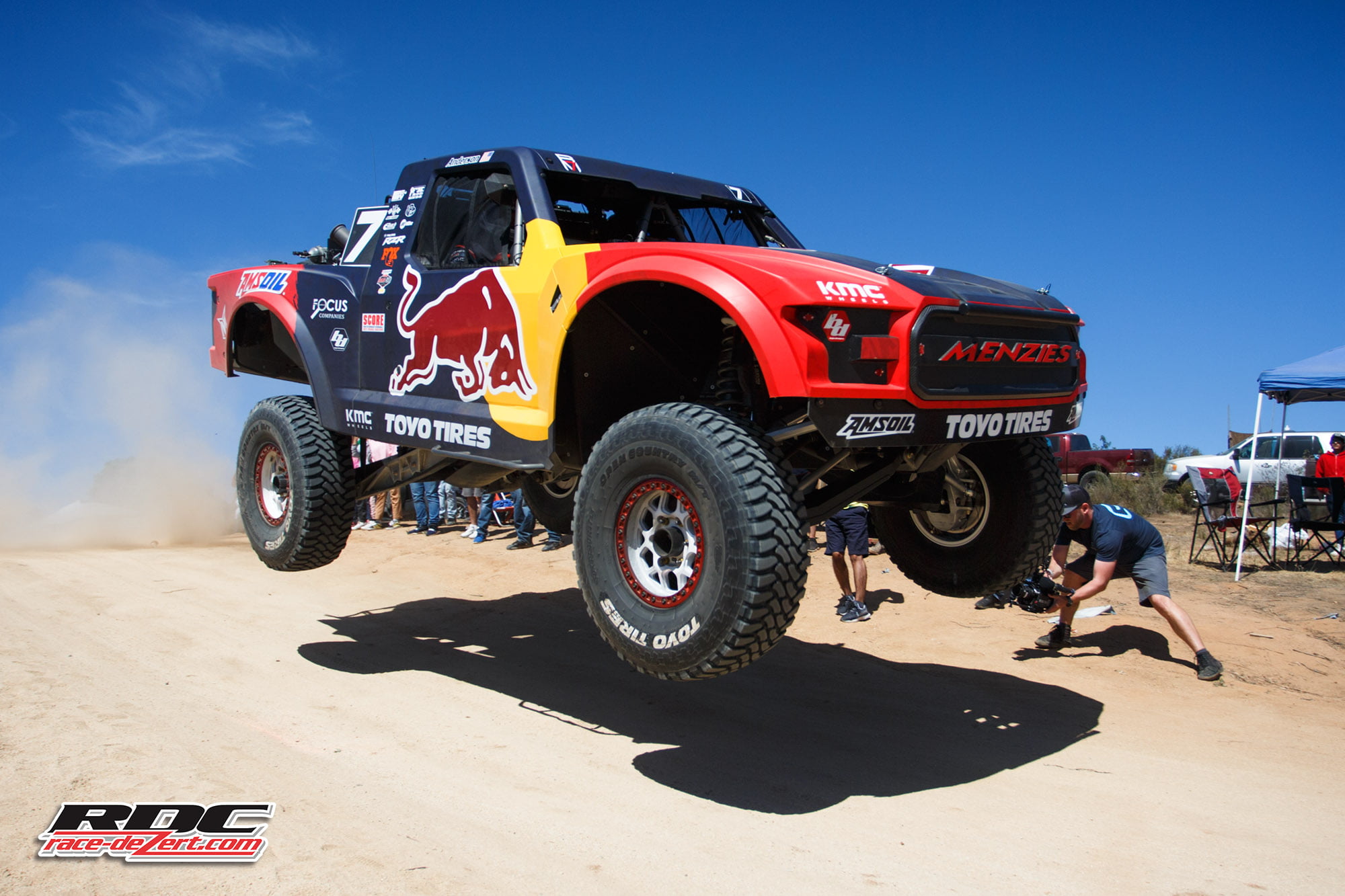 After winning the San Felipe 250, Bryce Menzies led the way at the start from the pole position in his RedBull Ford. He cleared the toughest parts of the race course, and set off north along the coast towards Ensenada. His 4 wheel drive Trophy Truck was out front until he developed a fuel delivery problem that at first limited his top speed, and then forced him to the sidelines. 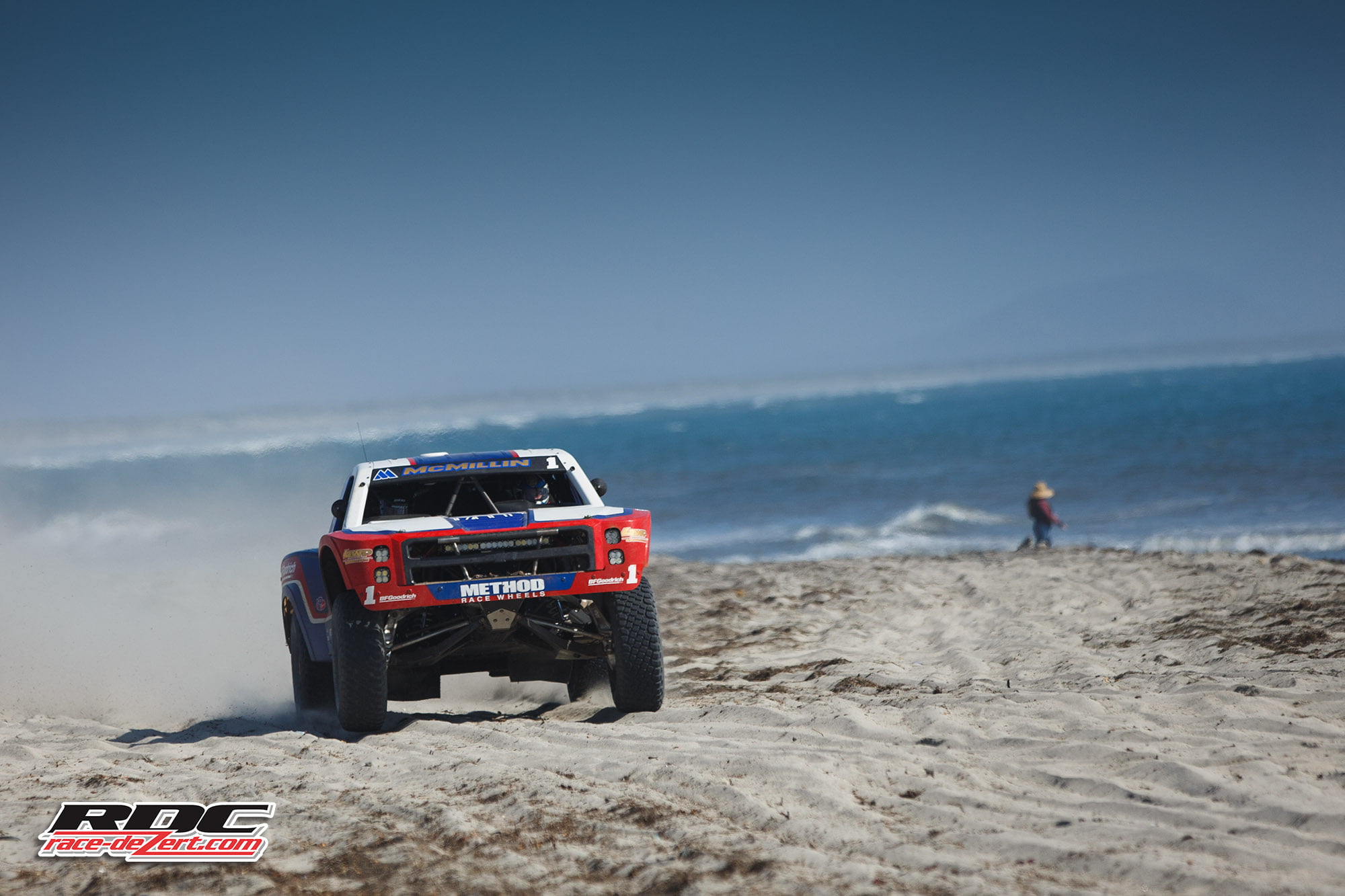 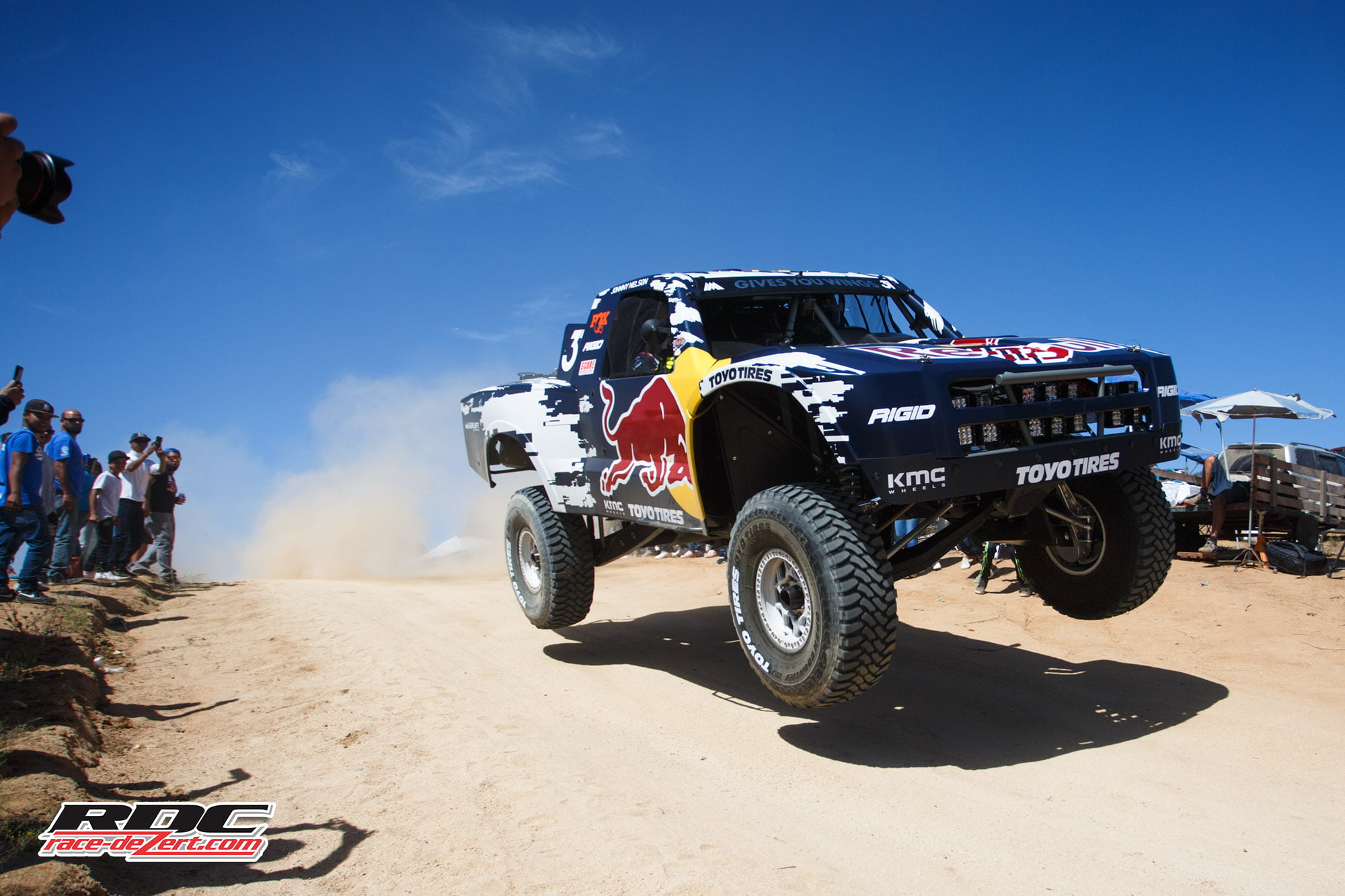 Here is where things went sideways at the front. Luke was going as fast as he could to put time on Andy who was hovering around 1 minute or less behind. As long as Andy finished one minute or less behind Luke, he would take the win on corrected time; Luke started one minute ahead of him. When Luke crossed the line, he had beaten Andy by only 4 seconds; the closest Baja 500 race anyone could remember. The story did not end there, in fact, it was just beginning. We soon learned that Luke had a time penalty due to speeding in a controlled section of the course. It appeared that Andy had won the race, however two incidents came to light. The first was that Luke had taken a line that was probably fine while prerunning, but on race day, there were spectators camped there. Luke got boxed in, and had to cut through their camp to get back on course. Granted, the spectators should not have been so close to the racing line, but Luke should not have driven through their camp. Nobody was injured, but the precedence had been set years ago; Luke was disqualified after a lengthy review by officials. 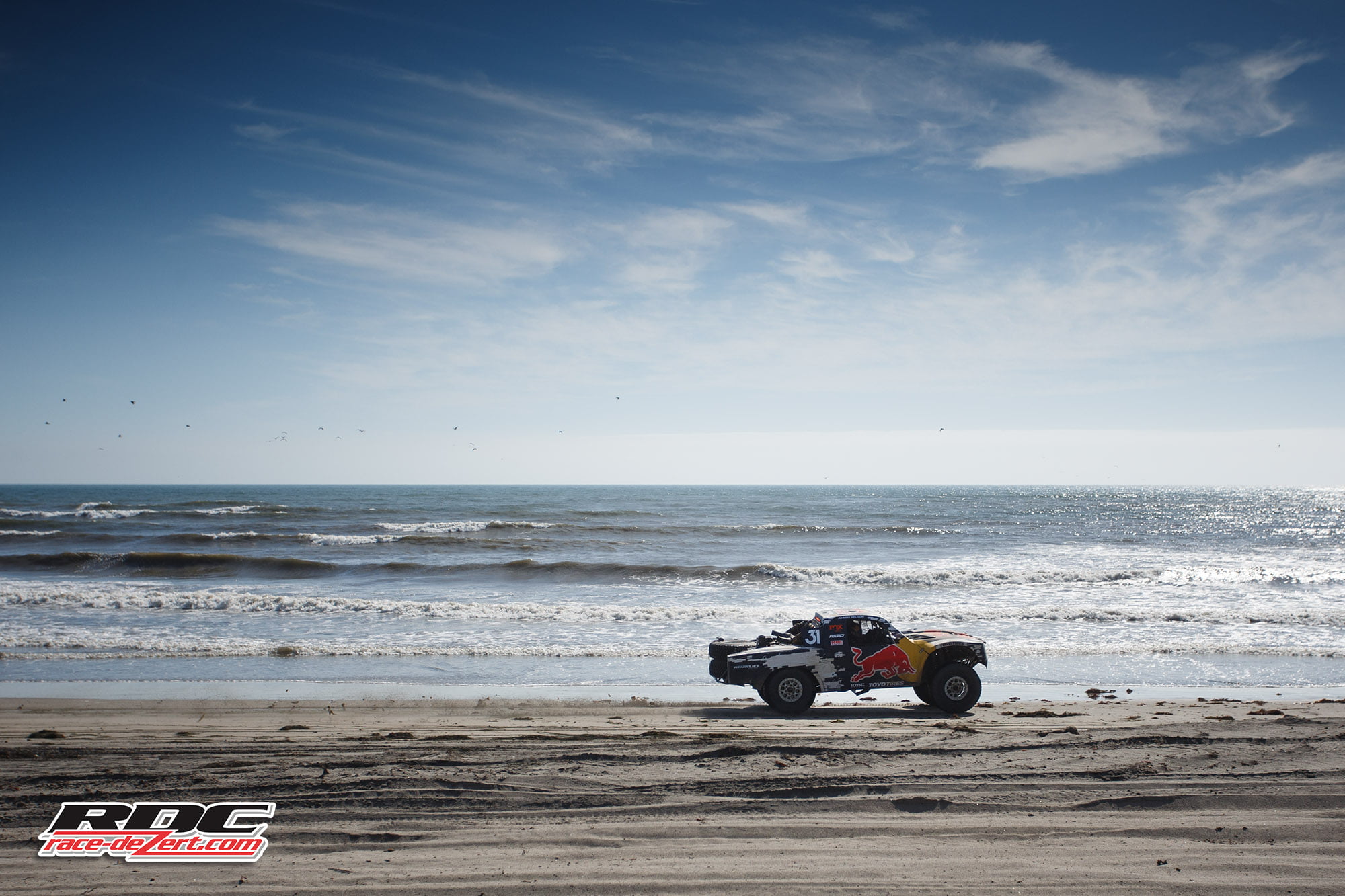 Then there was Andy. Footage surfaced that showed him appearing to make contact with a non-race vehicle in a speed zone. This too is strictly forbidden. Andy was assessed a 30 minute penalty for making an unsafe pass. This took the win from Andy, and dropped him to 2nd place. At least he was able to earn some points; Luke got none. Everyone understands that when drivers are on full adrenaline, and seconds could determine the outcome of the race, they don’t always make the best decisions, but the incidents could not be ignored. SCORE dealt with both issues quickly, and authoritatively. 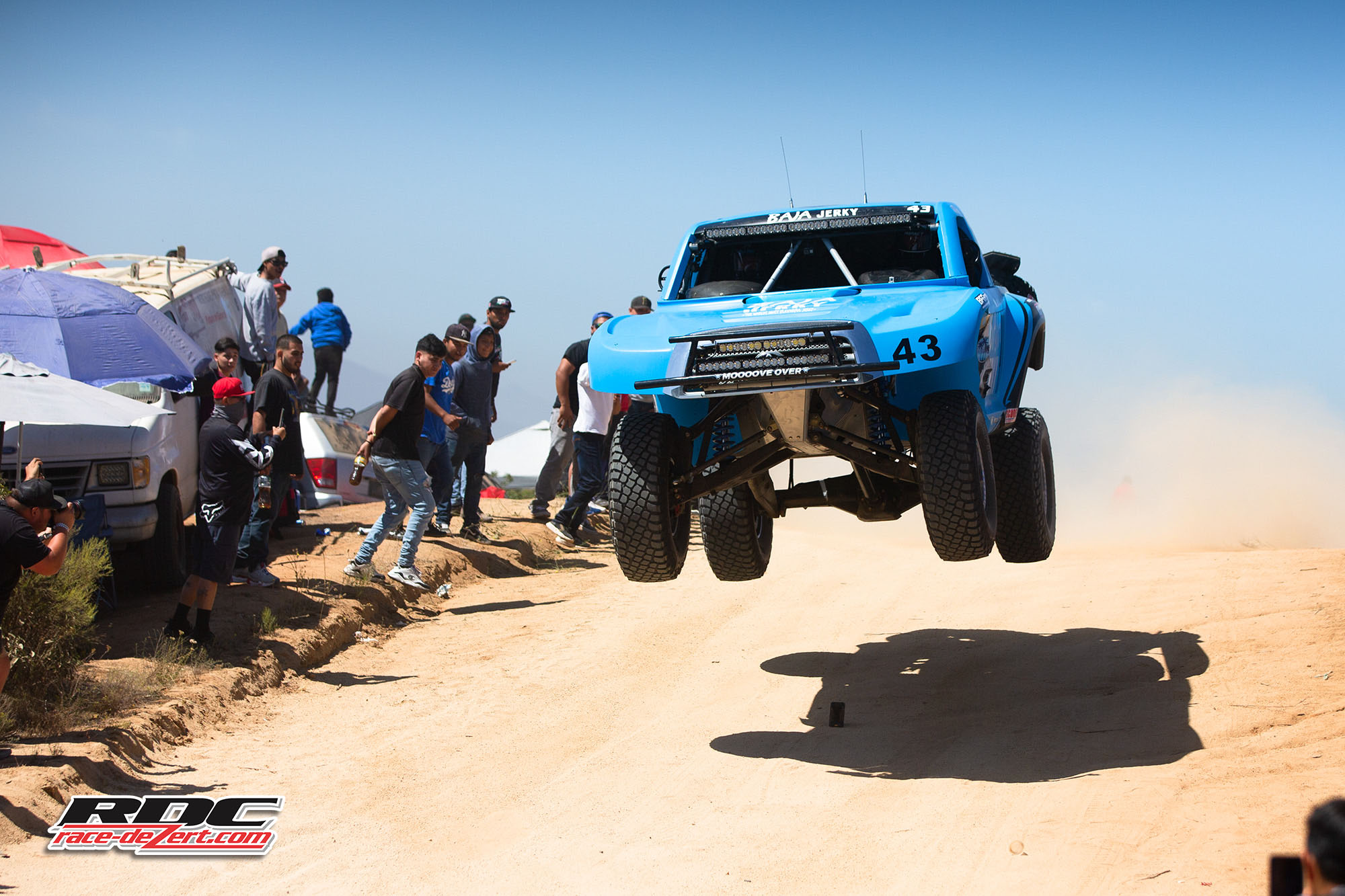 After all that was settled, a deserving driver who didn’t break the rules got the win; Larry Roeseler. Smooth, fast, experienced, and wise, Larry’s victory is celebrated by all. Tavo Vildosola got a much deserved podium finish, and Dan McMillin somehow landed in his customary 4th place. May the 4th be with you Dan. Rob MacCachren was 5th. 6th overall, and first place in the Trophy Truck Spec class was Jason McNeil. Always fast, but unable to keep a healthy truck under him in the past, everyone knew it was only a matter of time before McNeil was standing on the top of the box. McNeil was followed in by Broc Dickerson who came in to take the class one victory. 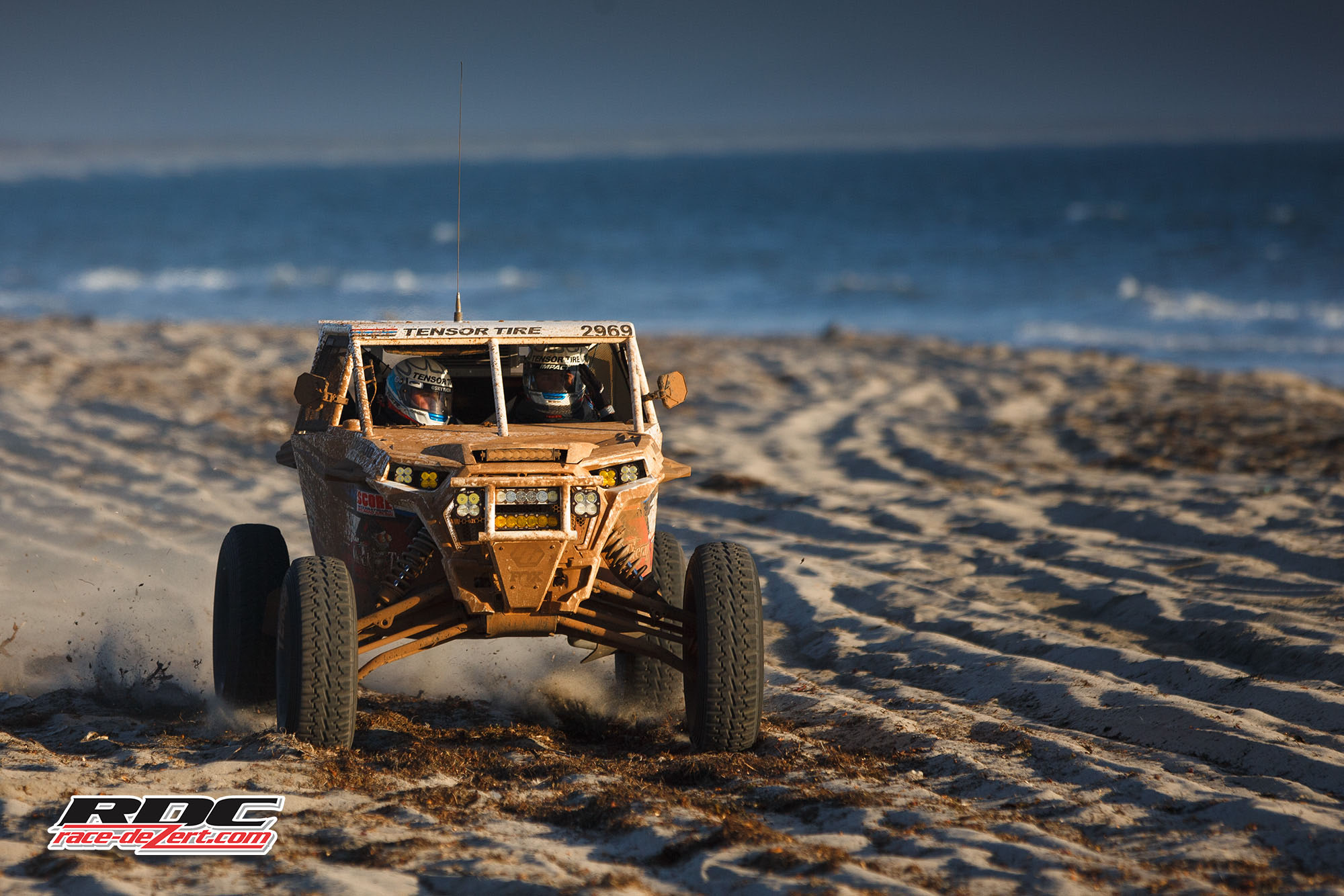 As other finishers trickled in, many got speed or VCP penalties that shook up the order. In the UTV turbo class, Phil Blurton was first across the line followed by Brandon Schueler. Both were unseated by Branden Sims who finished physically in 3rd, but ran clean (with no penalties), to take the win. Jeff Proctor earned another class 7 win in the Honda, and Freddie Willert came out on top in class 10. 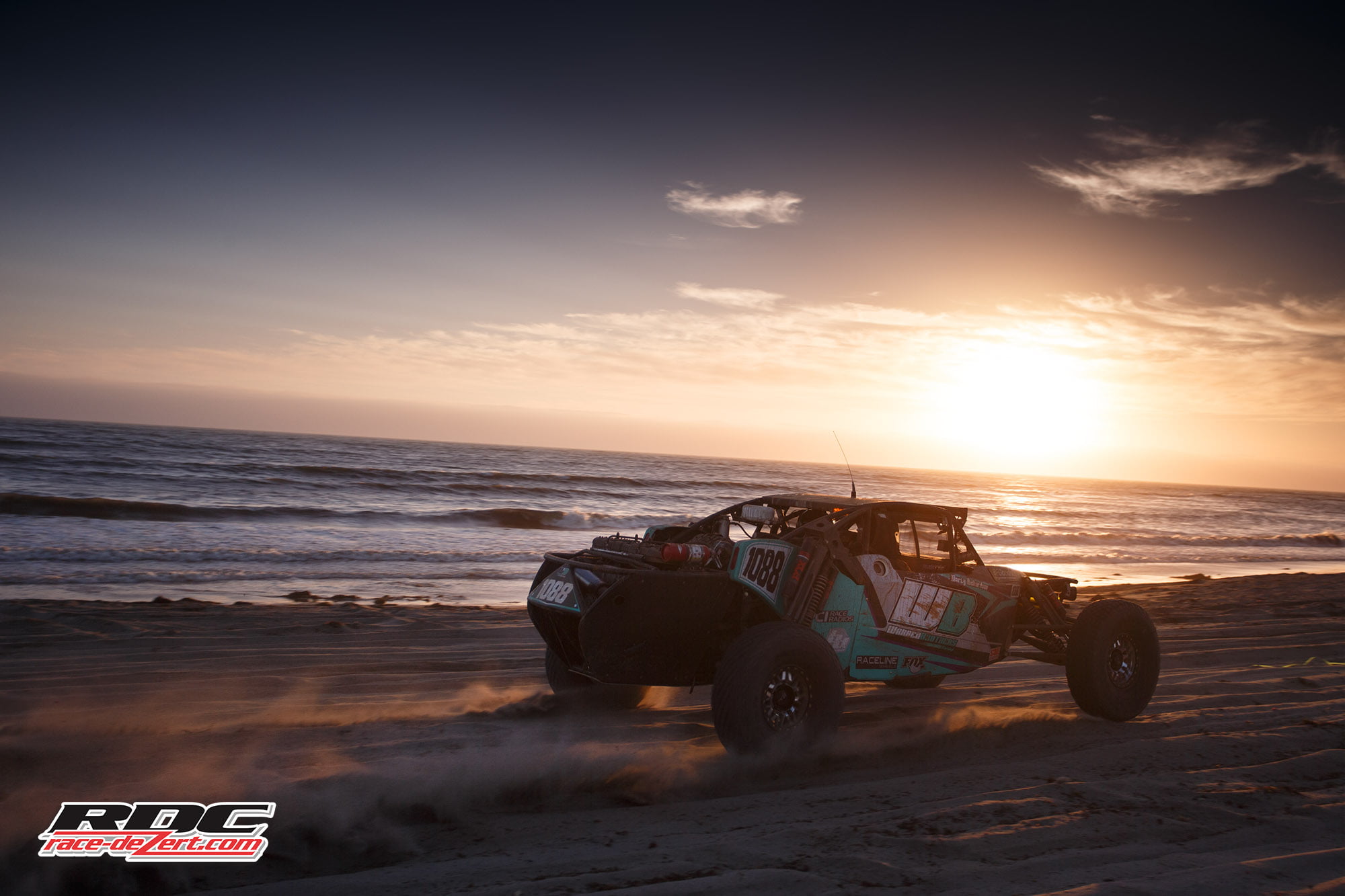 As finishers straggled in during the night, it became clear that the race had taken a toll on many. Cars looked like they had been buried underground, and many had been. All types of trailside fixes, and mangled parts could be seen under the lights. All the drama at the front of the race was forgotten as the mood shifted to awe for those who survived, and respect for what they had overcome. Night then turned to day again. Nobody wants to finish under the sun on day two, but the sight of several competitors crossing the line was invigorating to all. When Alex Gonzales came down the road in his VW beetle for his win, it was a perfect ending to such an epic, Baja 500.

Join in on the Baja 500 discussion in the forum.

Next up in the 2021 SCORE International series is the Baja 400 September 14th-19th. Click here for the RDC event calendar.