Over 100 riders gathered to take the start at the National Hare and Hound in Panaca Nevada. A ceremonial parade start complete with a police escort led the riders out of town where the real action would take place.

Riders had hoped that the recent rains in the area would keep the dust to a minimum but a Grand Prix style start would leave most choking in the dust as the riders jockeyed for position. 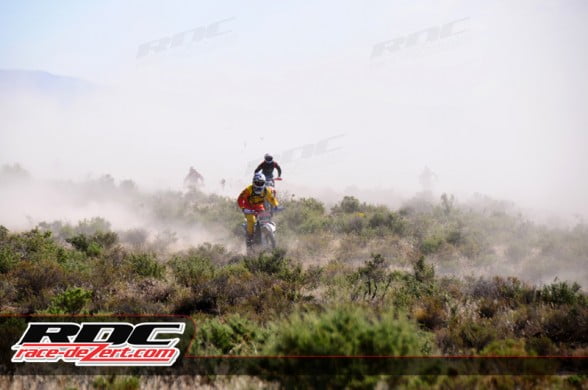 Kurt Caselli on his KTM got the hole shot and had clean air all the way to the top spot on the podium with an overall time of 2:34:23. “My bike was running good and we’ve been dialed in all year.” Said Caselli. “But two races ago I made a mistake and went down and definitely set us back as far as the championship goes. We still have a shot. This was the by far the best marked, safest and funnest Hound and Hare I have ever done, and I’m looking forward to coming back next year.”

Number 2 spot went to Jacob Argubright riding Kawasaki only a few seconds behind Caselli with a time of 2:35:32. George Antill said of Argubright he felt that he was the most improved rider he has ever run across. “Kurt has been giving me advice and I’m trying to take it is as best as I can and be even better next year.” Said Argubright at the finish. “I want to broaden my spectrum and do some more extreme racing and get my name out there.”

Number 3 spot went to one of Panaca’s locals David Pearson also on Kawasaki with a time of 2:36:49. Pearson said “I had a bad start and got caught up in the dust, both Kurt and Jake had good starts, rode great, and I basically ate dust all day and there was nothing I could do, but I got 3rd and in the points. Since I’m local everyone was asking me “Hey Dave, where’s the course go? All I could say was I don’t know.”

Michael “Coach” Collins said Lincoln County has permits for the next 5 years to hold the NHAH races. Next one will be from Panaca to Caliente Nevada, and another in the Pioche Nevada area. Round 9 is coming to Johnson Valley October 14 and Round 10 is October 28 at Lucerne Valley. The standings in points are close so there could be changes in the leaders. Hope to see everyone at the races. RDC will be there.