The inaugural 87 kilometre selective sector on military terrain kicked off hostilities on the Silk Way Rally 2021, on the first stage between Omsk and Novosibirsk. If in the bike category, Argentine Franco CAIMI (HERO MOTORSPORTS TEAM RALLY) took advantage of tricky navigation to take the lead, in the other categories, the Russians were firing on all cylinders.

In the car category (T1), Denis KROTOV and Konstantin ZHILTSOV (MINI JCW RALLY) took the lead, at the risk of having to open the track tomorrow. Pavel LEBEDEV and Kirill SHUBIN, their teammates in the MSK RALLY team, won the Light Prototype category (T3), while Sergei KARIAKIN and Anton VLASIUK (CAN-AM MAVERICK) dominated the SSV category (T4) on this initial stage.

To crown the day at the finish in Novosibirsk, Dmitry SOTNIKOV, Ruslan AKHMADEEV and Ilgiz AKHMEZIANOV, two-time winners of the SILK WAY RALLY, imposed their new KAMAZ-MASTER K5 in the heavyweight battle with the MAZs of their Belarusian neighbours. 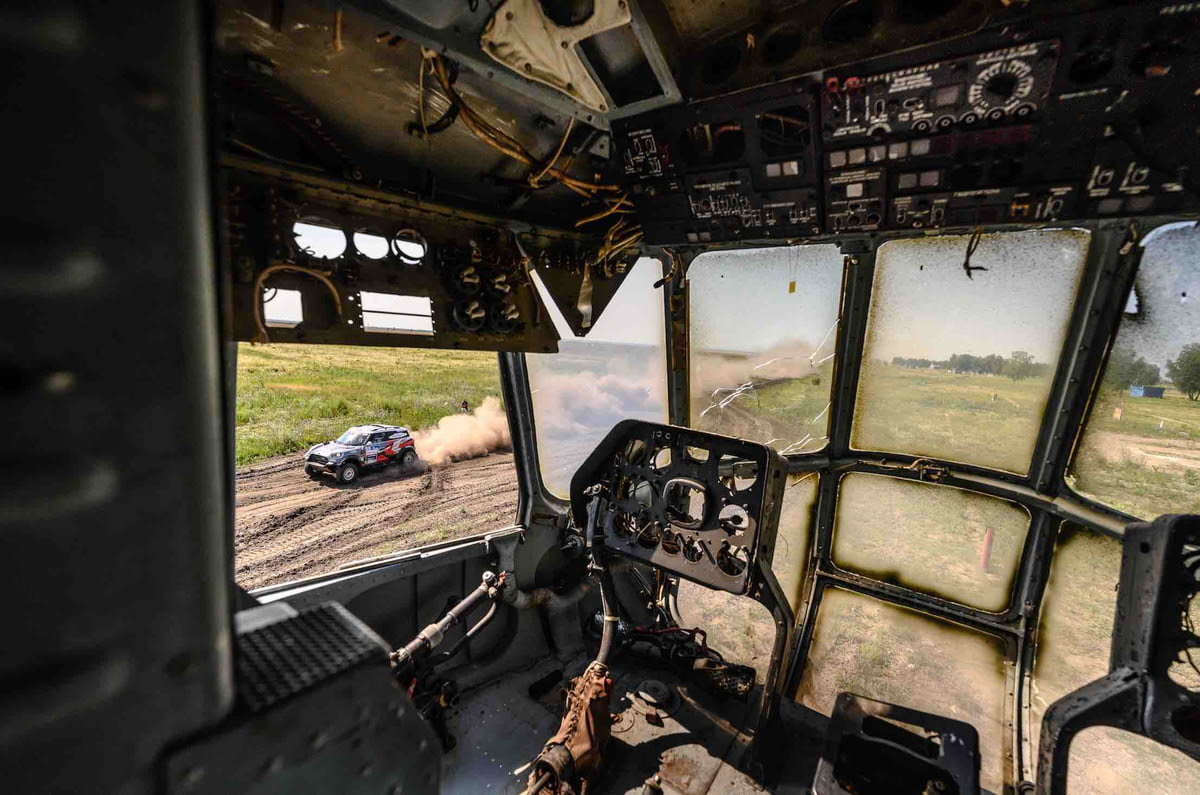 Over a short 87 kilometres stage you might expect the top riders to all have been within seconds of each other, so it was something of a surprise to see a rider as fast as Husqvarna’s new recruit Skyler HOWES finish 6:36 behind the winner. You could conclude that it was because he had the tough job of opening the track but then the eventual winner Franco CAIMI (HERO MOTORSPORTS TEAM RALLY) started third with not many tracks ahead of him. What is for sure is that with three riders in the top six, Hero had an excellent day and that Ross BRANCH (YAMAHA RALLY OFFICIAL TEAM), second today at 1:03, is continuing to show the form that saw him take the win in Kazakhstan a couple of weeks ago. Commented the ever-positive Botswana on the finish line: “I had a lot of fun and the time wasn’t so bad. And now we have a long liaison of over 500 kms.” And despite the tarmac haul they faced at the end of the special, all the riders were delighted to be back on their bikes after, as Adrien VAN BEVEREN (YAMAHA RALLY OFFICIAL TEAM) admitted, overindulging somewhat on Siberian cuisine during their stay in Omsk.

CARS : KROTOV DOES NOT CALCULATE

Yazeed AL RAHJI and Michael ORR (TOYOTA OVERDRIVE RACING) started first this morning and chose not to take any risks. “There was really too much to lose in this first selective sector,” explained the Saudi driver on the line. “My co-driver did a great job, but we prefer to let someone else open the track on the second stage…”. Winners of the day with a 50-second lead over AL RAHJI, Denis KROTOV and Konstantin ZHILTSOV (MINI JCW RALLY) did not calculate in the least. Third at 3:37, Guerlain CHICHERIT and Alex WINOCQ (CENTURY CR6 SRT) have already made their mark. Russians Vladimir VASILYEV/Aleksei KUZMICH (MINI COOPER COUNTRYMAN) and Frenchmen Jérôme PÉLICHET and Pascal LARROQUE (OPTIMUS RAID LYNX) complete the top five.

In the Lightweight Prototypes (T3), the other candidates for the FIA World Cup also played it safe. Perhaps a little too much so. All the better for the Russians Pavel LEBEDEV and Kirill SHUBIN (BRP CAN-AM) who set the 6th fastest time overall and won their category ahead of the Frenchmen Jean-Luc PISSON CECCALDI and Jean BRUCY (ZEPHYR PH SPORT) and the Spaniards José PENA CAMPO and Rafael TORNABEL (POLARIS RZR XTREME PLUS). Fourth on the day, the Argentine Fernando ALVAREZ and his French co-driver Laurent LICHTLEUTER (CAN-AM MAVERICK SOUTH RACING), conceded more than 9 minutes.

In the SSVs (T4), Sergei KARIAKIN and Anton VLASIUK (BRP CAN-AM MAVERICK) came out guns blazing for this first special of the SILK WAY RALLY 2021. Seventh overall on the day, the Russian duo are ahead of the Italians Eugenio AMOS and Paolo CECCI (CAN-AM SOUTH RACING) by more than 5 minutes. Evgeny FREZORGER, who knows the region well as he was the deputy mayor of Omsk for several years, accompanied by Alexey SHPUK (BRP CAN-AM), set the third fastest time. Undoubtedly the exploit of the day.

The KAMAZ-MASTER team transformed the first day of manoeuvres into an official presentation of their new K5 model with Dmitry SOTNIKOV, Ruslan AKHMADEEV and Ilgiz AKHMEZIANOV giving their new truck a dream debut. The Russian trio nevertheless had a nervous wait on the finish line before it was confirmed that Aliaksei VISHNEUSKI’s MAZ-SPORTAUTO missed the win by just ten seconds. With three KAMAZ and two MAZ in the top 5 and the RENAULT MAMMOET RALLYSPORT of Dutchman Maarten VAN DEN BRINK not far behind the truck battle looks set to rage all the way to Ulaanbaatar.

This is the last leg in Russia, then the Silk Way Rally goes to Mongolia.

The Terrain will change from one special stage to another. The competitors will find wide earth roads here followed by narrow forest paths with bumps and holes.

Then the surface will change again: the track will continue to pass through the Siberian forests, but the surface will become smooth and sandy. It will allow racers to increase the pace, but they will complete the special stage on bumpy gravel.

After the finish of the special stage, the competitors will have to drive 168 kilometers of the liaison along the legendary Chuysky trakt – a beautiful mountain road straight to the bivouac in Gorno-Altaysk.