ELBOW TO ELBOW AT THE FOOTHILLS OF THE ALTAI MOUNTAINS

Taking the competitors to the foot of the Altai Mountains, this second stage saw the rookie Daniel SANDERS (GAS GAS FACTORY RALLY) take victory in the bike category. Exploiting both his starting position and considerable enduro skills, the Australian finished just ahead of the man on form on this SILK WAY RALLY 2021, Ross BRANCH (YAMAHA RALLY OFFICIAL TEAM). In the car category the Russian Vladimir VASILYEV (MINI COOPER COUNTRYMAN VRT), the winner of the day, succeeds his compatriot Denis KROTOV (MINI JCW MSK RALLY) at the top of the overall rankings with Gerlain CHICHERIT (CENTURY CR6 SRT) and Yazeed AL RAJHI (TOYOTA OVERDRIVE RACING) less than a minute behind. We are also talking about a few seconds in the T3 Lightweight Prototype category, with the 100% female crew of Anastasia NIFONTOVA and Ekaterina ZHADANOVA (CAN-AM MAVERICK XRS) making amends to win the stage by a narrow margin. In the SSVs (T4), Sergei KARIAKIN and his BRP CAN-AM proved unstoppable over the 132 kilometres of the day’s special. In the trucks his compatriot Dmitry SOTNIKOV (KAMAZ), wins again to consolidate his advantage in the general standings. 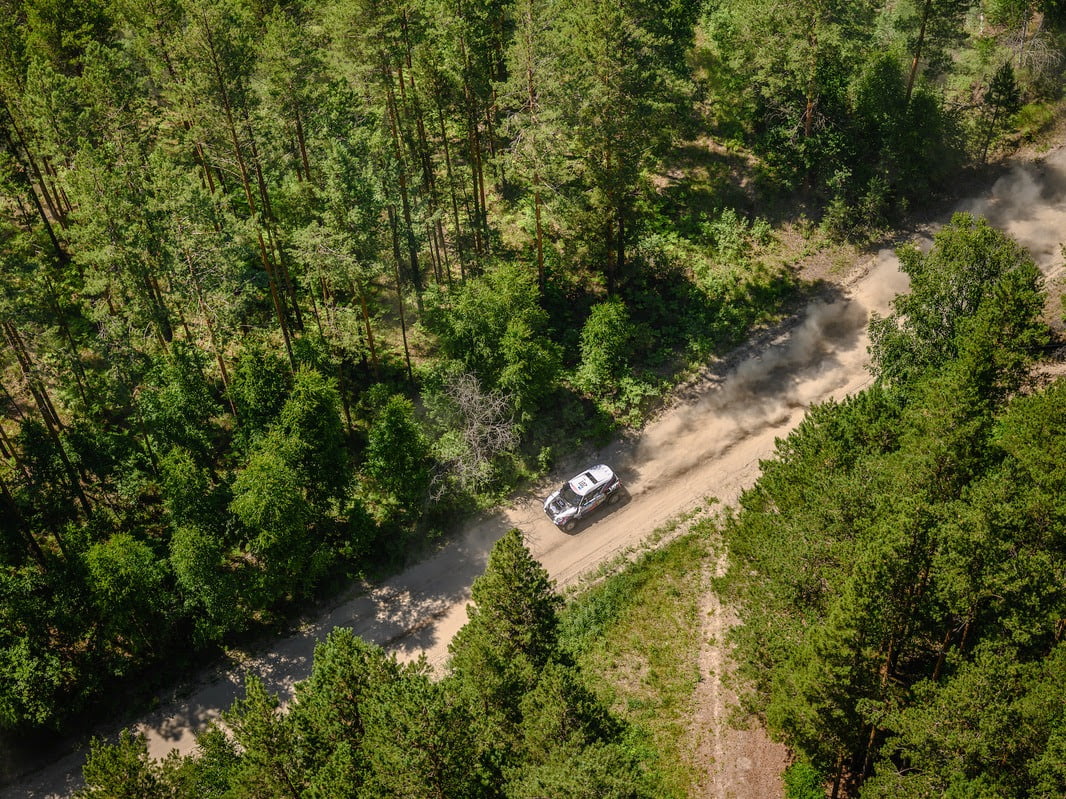 BIKES: DAY OF THE FACTORY ‘ROOKIES’

Starting 10th this morning after having got lost on yesterday’s first stage, the Australian newcomer Daniel SANDERS (GAS GAS FACTORY RACING) came from behind to win the stage. But with not so much navigation, his victory wasn’t just down to following his rivals’ tracks. With the first 50 kilometres over fast sweeping tracks and the rest in the forest with mud and ruts, the special could have been designed to show off the Aussie’s blisteringly fast enduro skills. Starting second this morning, another fast relative newcomer, Ross BRANCH (MONSTER YAMAHA RALLY OFFICIAL) finished second just 6 seconds behind Sanders. Commented the Botswana rider at the finish line, “it was a fantastic day’s riding. Win or loss I’m happy.” And although he might not have won the day he can be pretty happy to have taken the overall lead off Franco CAIMI (HERO MOTORSPORTS) by +2:26. Yet another factory newcomer, the American Skyler HOWES (ROCKSTAR ENERGY HUSQVARNA) finished third to make up for yesterday’s disappointment. Fourth on the day, the Austrian ex-Dakar winner Matthias WALKNER (RED BULL KTM FACTORY RACING) is third overall at +3:18. In the quads, after yesterday’s closely fought battle, Aleksandr MAKSIMOV (MARI TEAM) today managed to pull away from Rafal SONIK (SONIK TEAM) by almost 15 minutes.

CARS: VASILYEV TAKES UP POSITION BEFORE THE MOUNTAINS

Vladimir VASILYEV and Aleksei KUZMICH (MINI COOPER COUNTRYMAN VRT) arrive at the foot of the Altai Mountains as overall leaders. The most experienced of the Russian drivers took the lead in the second special stage while Yazeed AL RAJHI and Michael ORR (TOYOTA OVERDRIVE RACING) lost time in the dust of the other Russian MINI belonging to the previous day’s winner, Denis KROTOV. Guerlain CHICHERIT and Alex WINOCQ (CENTURY CR6 SRT) were second fastest on the day to move up to second place overall, just 13 seconds behind VASILYEV. This evening in Gorno-Altaisk, the three leaders are within half a minute of each other.

We thought we would see Jean-Luc PISSON CECCALDI and Jean BRUCY (ZEPHYR PH SPORT) take a first victory on this SILK WAY RALLY. But if they were ahead of the leader Pavel LEBEDEV (BRP CAN-AM MSK RALLY TEAM) and the Argentinian Fernando ALVAREZ (CAN-AM SOUTH RACING) by a handful of seconds, the Frenchmen had to bow out gallantly to Anastasia NIFONTOVA and Ekaterina ZHADANOVA (CAN-AM MAVERICK XRS), who came back from a long way behind after a disastrous first stage.

Two out of two for the Russians Sergei KARIAKIN and Anton VLASIUK (BRP CAN-AM) in an SSV (T4) category that they have dominated since the start in Omsk, two days ago, ahead of the Americans Austin JONES and the Brazilian Gustavo SOUZA (MONSTER ENERGY C

AN-AM) and the Italians from the SOUTH RACING TEAM Eugenio AMOS and Paolo CECCI (CAN-AM MAVERICK).

On a very fast selective sector, before attacking the forest tracks, the trucks just had to make sure they stayed on their wheels, without damaging their imposing structures during the final slalom between the trees. Dmitry SOTNIKOV, Ruslan AKHMADEEV and Ilgiz AKHMEZIANOV (KAMAZ-MASTER) started in the lead with their brand new K5 and achieved the perfect balance between caution and performance. The Tatar trio succeeded in keeping all their rivals at a respectable distance, signing a second successive stage victory. Behind them a chasing pack led by the Belarusian Siarrhei VIAZOVICH (MAZ), himself closely watched by the other KAMAZ MASTER of Anton SHIBALOV and Eduard NIKOLAEV.

ROAD BOOK: MARATHON IN THE ALTAÏ

In the context of the reworked route due to health requirements, the 3rd stage of the rally will also be the first part of the marathon stage. Set in the heart of the Altai Massif, the selective sector starts on a vast mountainous plateau before gaining altitude. The result is a radical change of surface with the first third of the stage being held on rocky tracks. Beware of punctures, which are likely to play an important role in this selective sector! This will be followed by more rolling tracks over the mountainous plateaus with some fords. Most of the stage will be made up of fast sections along the mountain plateaus with numerous fords over the mountain rivers. After the finish a short 15 kilomètres section will lead to the Kosh Agach bivouac. The competitors will be left to their own as it regards the mechanics of their vehicles, which will be placed under the ‘parc fermé’ regime.