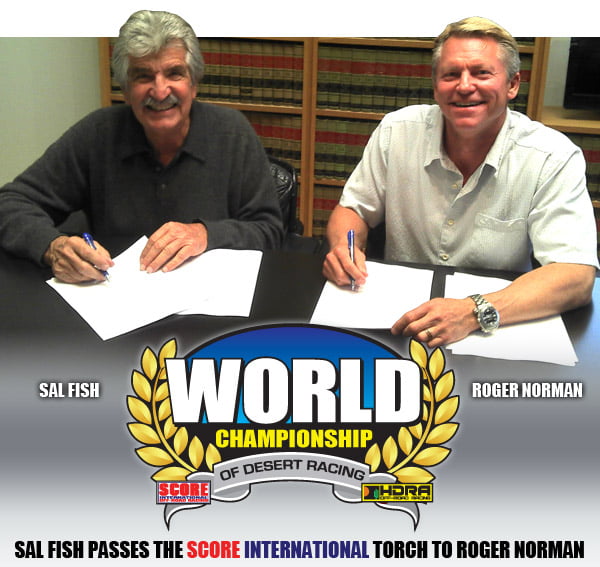 After nearly 40 years of stewardship, SCORE International CEO Sal Fish has turned over control of the premiere desert racing series to businessman, Trophy Truck racer and race promoter Roger Norman. SCORE International, originally founded by the late Mickey Thompson in 1973, is world renowned for its legendary races like the Baja 1000.

“It has been an incredible experience and lifestyle for all these years,” said Sal Fish, “It’s not often you have a chance to pass on your life’s work to someone who shares the same dedication and passion for the sport. It’s an emotional time for me and I would have never considered this if it were not for Roger, his wife and the team he has around him. I don’t know anyone who is better equipped to take offroad racing to the next level. Roger has some incredible plans; I am very excited for the future of our sport.”

The acquisition by Roger Norman allows the unification of the rules, technical inspection, class formats, car numbering and scoring systems between HDRA and SCORE that many racers have wished about for years. SCORE will operate under Hacienda Baja Racing, a Mexican company. SCORE and HDRA will remain independent but will share the same structure. Any car that passes SCORE technical inspection will also be HDRA legal and vice versa. Popular HDRA Classes like Heavy Metal will be added to the SCORE rulebook and every HDRA member will receive a SCORE rulebook. Co-Technical directors Jake Velasco and Art Savedra will each operate out of their own region; Art in Las Vegas, NV and Jake in San Diego, CA. Having two locations will make it much easier for racers going through the inspection process. “I’m excited to work with Art,” said Jake Velasco, “He took me under his wing when I started with HDRA and shared his many years of experience. By using a single set of rules, inspection will be consistent and much easier for everyone.”

“HDRA’s mantra, “For racers, By racers” will also guide the SCORE series,” said HDRA’s Robert Gross, “Sal passes on a huge legacy of excellence that we have to maintain and build upon in the future. We are hoping all the dedicated volunteers, course workers and fans will continue to give their support; they are a huge part of SCORE’s success.”

Mark Bass will continue as race director for HDRA. SCORE race operations will be under the direction of Jose Grijalva. “Jose has run the Wide Open Baja operation in Ensenada for 10 years and we have raced together in each other’s trucks,” said Roger Norman, “I know he will do a fine job running race operations for SCORE.” Jose will be coordinating race activities from the permit process to post race clean-up. He will be marking the courses and making the calls on raceday. “I am happy to be working with Roger at SCORE,” said Jose, “As a rancher, a promoter of races and a racer myself, I know what can be done to bring SCORE to the next level. One of the things we will be doing is qualifying before the Baja 500 and 1000. I hear what racers have been saying. Letting them start the race based on performance instead of luck will be one of the changes we will be making.”

Oscar Ramos will continue in his role as attorney for SCORE. “It is a high honor and a true privilege to be invited by Roger Norman to join his team on what will be a new era of Off-Road racing, said Oscar, “I’m happy and thrilled to be part of a group that will bring fresh ideas and improve what we all love, Off-Road racing.”

Roger has been in contact with Johnny Campbell and others in the motorcycle industry to increase coverage of the bikes and expand the sport for them as well. Things are still in the planning stages and the outcome will be determined by support from the industry but the goal would be to race the bikes on a separate day at the 500 and 1000. It will take many additional hours of labor and financial support but the bikes deserve their own race. Bike races would be streamed live to the internet and televised on national sports networks. The World Championship title would be earned by racing all three SCORE events and the National Hare and Hound held July 12-14 during the Reno 500.

Both SCORE and HDRA will have full exposure in 2013. There will be live internet streaming and nationally televised, one hour shows. New websites will be up shortly that will contain all the latest information. It may take some patience in the beginning but after this takes shape, the future of offroad racing will be set for years to come. You can get started right away by signing up for the HDRA, Southpoint Vegas 250 Jan. 11-13. The 250 will be a challenging 62 mile loop at Jean Nevada. Racers who act quickly can take advantage of 2012 entry fees. All the information you need is located at: www.hdrarace.com

About SCORE International
SCORE International is an off-road sanctioning body in the sport of desert racing and is famous for its flagship event, the Baja 1000. SCORE races are held in United States and Mexico. Founded by Mickey Thompson in 1973, SCORE continues today under the direction of Roger Norman.