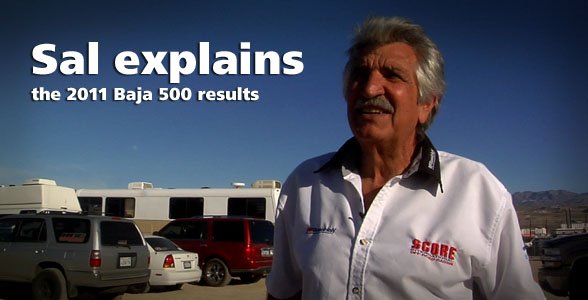 We looked at information we received (in the days after) and talked to individuals that we were not able to talk to at the race, we listened to what they had to say. We wanted to make sure we had all the facts to make a correct decision.

Robby Gordon was DQ’d for 2 incidents of finish line misconduct, can you explain exactly what he did to incur this penalty?

He came around the finish right hand turn where he slid off the course into our spectator area that was behind our fence and some K barriers, thank god that he didn’t have any contact that I am aware of with them. Then he proceeded to do 2 spin outs in the area that I felt was very unsafe considering the situation with spectators on either side of the course there. I just felt it was totally unnecessary and jeopardizing people that were in the area and it was not the kind of conduct I expect from a professional racer such as Robby in that situation.

There was a second video of him doing a donut after he had gone through the finish line spectator area, was that the second incident of finish line misconduct?

Yes, if you look at that video its actually very frightening as there were people in that crosswalk area there and its just not the right thing to do.

Jesse Jones was DQ’d for going backwards on the course, the area where he did so was a wide graded road and he followed local traffic out on it at a slow rate of speed. What is the rule about this?

They could either wait till the end of the race or find an access road that is not the race course itself and turn out. Going backwards on the course would not be the correct thing to do.

How is the highway classified in Baja since technically chase trucks are “driving backwards” on the course when they are traveling back from a pit on the actual highway?

We don’t block the highways so you have the normal traffic going both directions on the highway. Obviously I think that’s self explanatory. The highway is not classified the same as the dirt race course sections.

Does SCORE review Youtube videos since it seems everyone has a cell phone with a camera now days?

Well we look at them but you have to remember there are things that happen before and after that video that you don’t see. I am very cautious about looking at them. Its something we are going to have to look at immediately, is how long do we keep this door open. If someone gives us a video now of something happening, is that a situation that we can go back and penalize. In real life that happens if someone is shown committing a crime and it doesn’t become evident to law enforcement till a year later something happens.

Is SCORE going to in the future have a time window that people will have to submit videos for review before final results?

I have not made a decision on that yet, my nephew Paul and I have been discussing it I think we have to be very cautious here to make sure we don’t set a precedent that could damage our sport or anything like that but I do think we have to look at it. Things have changed, society is different as you said everyone knows everything faster than everyone else. There are people spread out all over the country and our racing community has to realize that they are not out there in a vacuum, everything they are doing is under a microscope. Because of the tracker we keep an equal playing field and I think we have done that and people are respecting the race courses and the land and staying where we have permission to go. Now its gone to the next level where there are other things that are visible that we wouldn’t have known about before. I think we have to look at it and how we respond to it, well that’s gonna be an interesting question.