In early April, the off-road world received news that legend Rod Hall would return to Baja, California to race the 2015 NORRA Mexican 1000, a race which catapulted his career in to becoming the winningest off-road racer in America.  Hall raced the inaugural race in 1967 and two years later won the event in his ’69 Ford Bronco built by Bill Stroppe.  The Bronco became an instant classic and went on to become synonymous with “vintage” off-road racing.

When the news started circling that the original ’69 Bronco was being restored, we were finalizing our content plan for our Legends and Heroes series with BFGoodrich Tires. Rod Hall was already at the top of our list, so up we went to Reno, NV to shoot with Hall at SAMCO Fabrication, the team behind one of the most renowned restoration projects in off-road. The task seemed fitting for SAMCO owner Sam Cothrun, who spent four years under Rod Hall International (RHI) before starting SAMCO in April of 2002. Cothrun’s final project at RHI was race preparation on Hall’s Hummer H1, now on display at the Off-Road Motorsports Hall of Fame.  Before SAMCO opened its doors, Hall himself helped move all Cothrun’s tools over to his new space.  Prepping the H1 was their largest project at the time and they went on to win the 2002 BITD 4100 Championship in that transition year.

“My first off-road vehicle was a motorcycle and I got that when I was 14 years old. And then when I turned 16, I…

The two have been working together since, with over 30 race wins in vehicles prepared and navigated at BITD and SCORE events.  “Working with the Factory GM Hummer program for all those years was a great experience,” Cothrun says.  “Production racing has given us a unique perspective that helps us develop production vehicles with Rod Hall Products.” Cothrun has grown SAMCO Fabrication to a team of seven.  For the first four years, it was just Sam and his wife Christine in a 1200 square foot shop.  As with Hall, humble is where he started and stands. Cothrun got in to off-road when he was 14 with a $600 1972 Bronco basketcase, building it in the garage behind his single wide trailer. These humble beginnings makes him proud to be where he is today with his team at SAMCO.

Cothrun’s first employee was Jake Povey, who now works for Menzies Motorsports.  Alex Baker has been with SAMCO for about eight years. Baker headed up the Stroppe Bronco restoration and manages many projects in the shop. Tim Sanders has been fabricating with SAMCO for the last 4 years, as well as Todd Krause, John Sandusky, Jenny Williams, Jim Berryman and Austin Hall rounding out the team. SAMCO is a fairly diverse shop that has taken on some amazing builds in a short period of time.  They specialize in mig/tig welding, machining, race prep, sheet metaling, CnC plasma, gear and shock rebuilding, magnaflux servicing, tire servicing, and have a 100 ton Japanese Amada press brake.  SAMCO is looking to do more production fabrication in the future so they’re gearing up to be able to do more in-house. 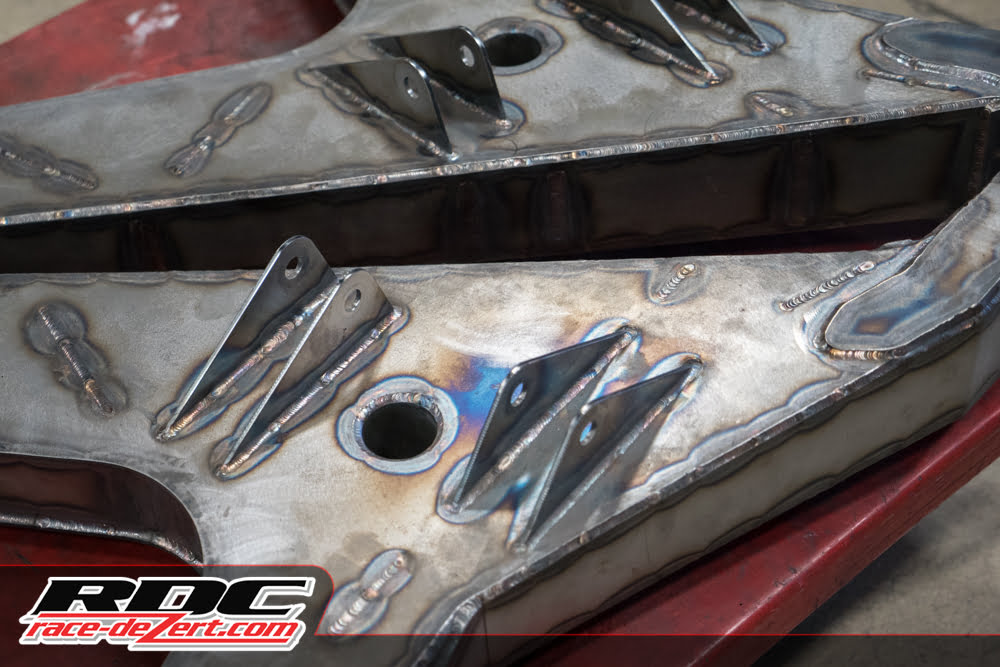 They’ve built quite a few Jeeps, Toyotas and Dodges for rock crawling, which is a huge part of off-roading in Reno. Reno is one of the most diverse areas in the United States and is so vast beyond SCORE, BITD, LOORRS and Ultra 4 courses. The Rubicon and Fordyce are some of the most iconic rockcrawling trails around and less than an hour away from SAMCO’s shop.  Nevada is boundless.  For example you can go to Black Rock and explore up there for hunting, fishing or Burning Man and get an idea of how big it is.  SAMCO’s access to these places and different types of off-roading is what makes their business dynamic.

“Our jack of all trades approach is our strength,” says Cothrun. “Helping other race teams with things like magnaflux or shock work is very rewarding. If you can make a positive difference with somebody’s program, that is a very good feeling.” And not just other programs but his own.  Cothrun started building his own 7200 race truck in 2007 and completed it in 2010. Inspired by Larry Ragland, he used an inline 6 cylinder out of a Chevy Trailblazer.  The truck won seven races, including two overall’s at the VORRA USA 500 with the underpowered but reliable truck. Cothrun considers that truck his college degree, having spent a ridiculous amount of time building and racing it.  Or maybe it was spending 17+ years with Rod Hall? 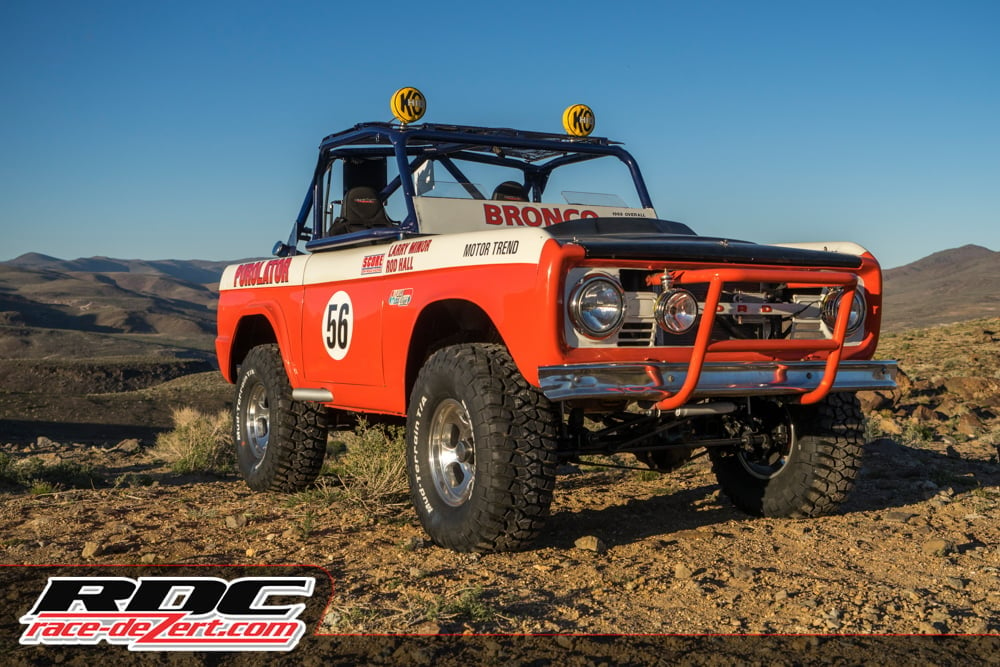 Regardless, wheeling Hall’s ’69 Bronco off the start line of the 2015 NORRA Mexican 1000 was no easy feat.  The vehicle spent years in a desert junkyard, hammered by elements until someone uncovered it, gave it a fresh paint job and gifted it to the Off-Road Motorsports Hall of Fame, where it lived until called upon for the 4 day rally down the Baja peninsula. “Getting all the parts in time was pretty challenging. Alex did a fantastic job on that thing.  Time was our enemy, but we got it all together at the last-minute.  They had no mechanical problems during the race that stopped them,” says Cothrun. The 6130 Hall truck living in the shop was originally built in-house at SAMCO in 2010 as a 4-wheel drive rally truck they planned to race the Australian Safari Rally in. Its first race was the 2010 Baja 1000 where it finished mid pack in the Trophy Truck class.  Not bad for an out of the box truck. When Class 6100 came about, it fit the rules perfectly and that is where it has raced since. Currently, they’re doing a full suspension revamp – longer, wider and much more wheel travel but still 4 wheel drive.  4-wheel drive, however, was banned in the class after they raced the truck but they are grandfathered in.  It’d be cool to see the rules put back to the way it was to potentially allow more Ultra 4 type vehicles to race in the class. No mater what, 6100 is a very good class. SAMCO designs and manufactures some of their own products, including their Terad-9-amic Axle Housing designed specifically to conquer the Baja back roads. Each Terad-9-amic housing is composed completely of 4130 “chromoly” steel including the 4″ x .250″ wall heat-treated tubes. The pumpkin is uniquely designed to achieve the highest ground clearance and high oil volume. All seams are muli-pass tig welded inside and out to ensure the most complete bond.  It was the first asymmetrical designed 9″ based housing that Cothrun knows of. Heat treated tubes, high clearance skid plate. It was designed for 6100, 7200 and Class 8 trucks. Price point with skid is $2,200. Getting to know Sam and the rest of the guys at SAMCO Fabrication through our project with BFGoodrich Tires was great.  We met up with them down in Ensenada to send Rod off the start line at the race and if you’re curious as to how they finished, here’s a recap from their ORMHOF’s Facebook page:

“We began in Ensenada with nine other vintage Broncos in the class and assumed Rod’s mantra of going “go no slower than is necessary.” Rod and co-driver Shelby Hall were able to inch their way up a few positions each day. By the beginning of the fourth stage yesterday the team was leading the pack in overall time; with the nearest competitor just 2 minutes behind. Rod and Shelby rallied hard through the last 175 miles of rocky mountain roads and sandy beach tracks and arroyos, and when the dust settled in San Jose del Cabo had a 2nd place trophy in-hand. Samco Fabrication did one heck of a job on restoring the Bronco.”

Check out SAMCO Fabrication at www.samcofabrication.com.

D
Kilian Hamlin
"When the news started circling that the original ’69 Bronco was being restored" Interesting choice of words. Leads one to believe that the Bronco in question is the actual 1969 overall winner which is not the case.
Cool to see Sam doing so well.
Very proud of Sam, he is a humble guy who would help most anyone and is a gift to this areas off road world.