Here’s my short report about a magic journey I made thanks to Pistol Pete:

We’re off! I slam my foot on the throttle, the eight cylinder roars like a wounded T-Rex and here we go. It’s 12 March, and 30 degrees Celsius. I’ve just come from my fabulous winter training in Finland (minus 30 degrees) and now I’m catapulting myself in Pete Sohren’s Trophy Truck over the first metres of the 25th San Felipe 250. The houses of the town on the east coast of the Baja California seem a blur as I fly by. I hear Bryan Lyttle’s voice in the intercom, we quickly find our rhythm. At Race Mile five we reach a field of rocks. I hesitate for about a millisecond: Take them between the wheels or under the tread? A fraction of a second is too long: Both left tyres punctured, brake discs destroyed.

Bryan and Taylor rush out of the truck – one of the specialties of the Trophy Truck is that you have a co-driver and a mechanic in the cockpit. The driver sits in the middle. 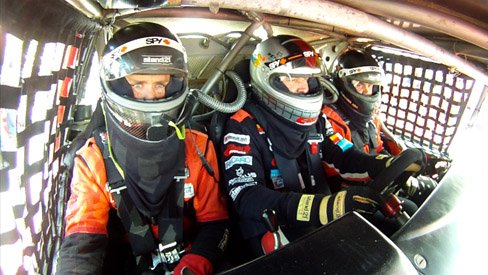 Cozy cockpit: navigator, driver and mechanic in a Trophy Truck

They rip the wheels off, remove the remains of the brake discs and disengage the brakes on the left. Fit two new wheels (a wheel weighs around 40 kilos). Bryan and Taylor spring (possibly now five kilos lighter) into their seats, rocket start and onwards. Without left brakes we go full bore – until at about 115 kilometres a rear right tyre rapidly loses air – as if a valve has come off. At the service point we get a new wheel and ranking 15th we hand the Trophy Truck over to my partner Pete Sohren – aka Pistol Pete – after around 230 kilometres. 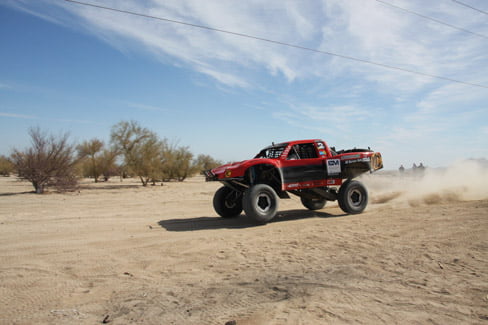 Now, what you have to realise about Pistol Pete is that he’s extremely quick and doesn’t even know how to spell the word “fear”. With all his routine and driving genius, Pete brings the bruised and battered truck home to San Felipe after 250 miles in 16th place. An incredible performance. 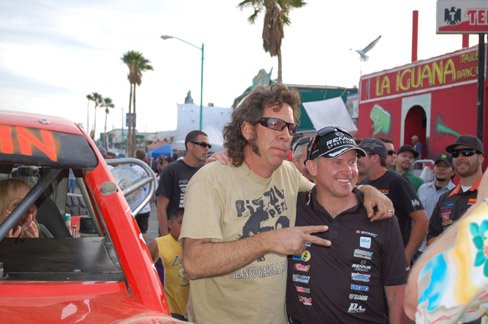 See for yourself: Pistol Pete is simply the greatest!

What is left for me to say? First: a huge thanks to Pete for giving me the chance to drive his truck, for his trust and for the great time we had racing. And thank you to AGM and Martin Christensen for the perfect back up – as usual. Martin does it right: He doesn’t get bogged down in nostalgia about our sensational overall win at the San Felipe last year. He looks ahead to the AGM Trophy Truck. And you’re right Martin – let’s go for it!

Maybe you had already heard: Around four weeks ago I tore my Achilles tendon playing sport. Normally I wouldn’t have been able to race. But Dr. Martin Poell as my doctor and Sigi Hornikel my physiotherapist performed what seems like a miracle. I drove the San Felipe 250 without one twinge of pain! My sincere thanks to you both. And above all I want to thank my wonderful wife Petra and our two children for their support. They were so incredibly wonderful and kept me bolstered and supported and looked after me – without their help I would never have managed in San Felipe. Now I’m very happy to be heading home again.

And what’s coming now? Well, as they say, there’s no rest for the wicked. Preparations for the Baja 300 Powerdays Germany are running at high revs. After missing many appointments because of my injury I need to get going to catch up with what’s my team have been doing – in the last weeks they’ve been flat out.

I’ll be back with more news in four weeks. Until then,

F
RDC
Awesome, that was a great race event. Congratulations for a great job well done and looking forward always for more updates. Thanks for sharing this to us too, I loved those pics.