For the 32nd time the once small fishing village of San Felipe hosted the SCORE Baja 250. For years this race has been known for the party atmosphere, crazy crowds, sand, rocks and miles and miles of 4ft deep squared edge hell known as the San Felipe whoops.

The early morning light fired off the first racers into the abyss with the top moto teams dicing it out. The newly formed team of Mark Samuels and Justin Morgan quickly took control of the race by the 70mi mark and never looked back. “Mark rode the start to race-mile 23, I rode all the way back around to Mile 192.” Said Justin Morgan at the finish. “Mark rode from there to race mile 282 and I rode into the finish the last 40 miles. We had a really good plan and Mark and I have been friends for a long time and we’ve done this a lot but we weren’t together in recent years, so it’s really cool how a plan like that comes together. Definitely the most challenging was just the number of miles. It’s always a big factor in the morning especially because we were fourth off the start, four minutes back, so we were working off the dust. After this, I think we’ll be at the SCORE Baja 500 for sure.”

Following up behind Morgan and Samuels duo were the two entries of Santiago Creel in 2nd and 3rd positions.

Obviously the race everyone comes to see is big boys in Trophy Truck, but this year SCORE threw them all for a loop making the San Felipe the qualifier for the 50th Baja 500. Often racers complained that a 3mi-5mi course set away somewhere is not representative of a Baja race, so how about 320 miles of qualifying? Not only did this play into the racers strategy but also gave them incentive to finish the race no matter what. The stage was set for some great competition. As the top motos finished for the day the Trophy Truck race was just starting to unfold. The un-yielding terrain that San Felipe is known for took its toll on past winners and champions taking current points champion and 50th Baja 1000 winner Apdaly Lopez out early and others like Robby Gordon, BJ Baldwin and Billy Wilson would all suffer massive troubles but would work through the night to finish and solidify their spot for the Baja 500. For the second year in a row Cameron Steele would lead and cross the line first only to have his glory stripped away by Rob MacCachren for the win. “There are so many SCORE Trophy Truck drivers that are very competitive and one wrong step, clip a rock or something and you’re done,” said MacCachren at the finish. “The guys worked very good on the truck, this truck’s been very reliable, this is two years in a row. Can’t be thankful enough for that. We started sixth. With the draw we got real lucky being up there. It’s pretty tough to come from the back. When I saw the draw and we were sixth I said we’re in a good position. We got by Mike Lawrence in the wash before race-mile 60, (Adam) Householder had a flat, we got by him and we just set sail and tried to catch up to Bean (Justin Smith) and Cam and we were slowly making ground on them.”
“We got to Borrego and Bean had a problem and he pulled out right in front of me and it was a bummer because it would have been good for us to get ahead of him there but we just had to trail him until about race mile 200. He pulled over and got gas and we went by and started to get closer and closer to Cam. Right before Matomi wash it was a real twisty road and I was trying to tiptoe though there and not hit any rocks. I clipped a rock, we jumped out, changed the flat really quick and nobody got by us. We lost that time to Cam but coming up to the finish I could tell we were catching him again. I know it’s incredible out there on the course, all the people you see on the side of the road cheering you on. As you’re coming it’s almost like a sea. The course is closed, you’re coming, there’s cameras, there’s drones, it’s incredible. You come through at 100, they open up and you come on through. I love racing San Felipe.” Cameron Steele on his second place finish. “San Felipe is a bad ass, super tough race and the hardest part is knowing how much to SPRINT in this sprint race when it’s also the toughest race of the year. We had some sort of engine management issue that took the go go out of our go go go for the last 50 miles. After finishing in the top 5 for five races in a row it shows we are on point. We really wanted this one so I’m having a hard time being stoked but am happy to bring it home on the box. No flats thanks to BFG and epic pits thanks to Bullet Proof Diesel and the DA. Rene Brugger preps the best truck in all of Off-road racing.”

The rest of the field was dominated by a pack of McMillins with Luke and Andy finishing in 3rd and 4th spots and Dan finishing in 6th place overall. “ We had a great race,” Said Luke McMillin, “Absolutely no issues, we lead a lot of the day on time but with starting in the mid 20’s we got stuck in dust the second half and Rob got away from us. Overall, it was a great race, absolutely no issues with the trucks, not even a flat tire. The course was brutal but fun at the same time, so thanks to score for putting on a great race. Biggest goal of the race was to get a good spot for the 500 and looks like we get to start 3rd at the Baja 500 and I can’t wait! Leaving San Felipe we are saddened by the passing of Omar Corona Arrollo and Abelardo Padilla Camacho who were struck by the #91 Trophy Truck of Ed Herbst when he lost control in a high speed section. This tragedy once again underlines the need to educate the public on the dangers of spectating at the races. While the urge of watching these amazing machines dance through the desert at speed is alluring, the odds of something catastrophic happening goes up exponentially when we stand too close to the action. We urge the public to think about your family and friends when you’re spectating. It is not a local phenomenon as we’ve unfortunately seen this in the States as well. Please keep an eye out for your fellow man when you see it happening and say something if you see it. They may not thank you for it at the time but it is better than the alternative. 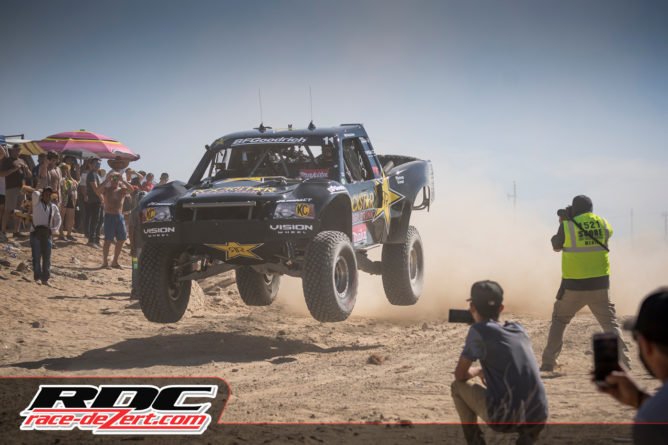