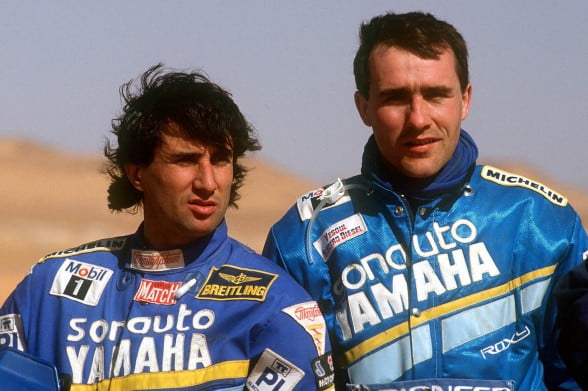 Only a couple of weeks after the fantastic news of the participation of Stéphane Peterhansel at the Sardegna Rally Race, yet an exaggerate announcement. Yes, also Cyril Neveu will start the “match”.

Cyril Neveu, we could stop here and let your imagination working. But let us jump a step back in the story.

The 26th of december 1978, in Trocadero’s place, in front of the Eiffel Tower, Thierry Sabine gives the start of the first edition of the Oasis Paris-Dakar, the Rally which has now 32 years, and is the hardest adventure and a real “epopée”. The winner of the first edition of the Paris-Dakar, 10.000 Km South on the beach of the Rose Lake of Dakar, was Cyril Neveu, a 21 years old men later defined as “indestructible”. It was the 14th of January 1979, and the little man of Orleans was on a Yamaha XT500.
Cyril Neveu has won four other times the Dakar, in 1980 still with his XT, in 1982 with a Honda, in 1986 and 1987 with the legendary Honda NXR, and became at this moment the real Myth of the Dakar of the pioneers.

Neveu has never left the rally world. He has continued to race, organized beautiful Rallies, and go around on bikes, for him-self or for his “customers”. And now, he comes back to the World Championship, that he has helped to create, racing the Sardegna Rally Race.
Cyril Neveu, who has raced also with Cagiva in 1991, will race with an italian bike, the brand new Beta RR Enduro 350 4 strokes. The Italian company, very famous for its off road bikes, enduro and trial, is very proud to help one of the most important biker of the story of Rallies, and is confident on his official structure, the Beta Dirt Racing Team of Paolo Macchetti, to help him.

The come back of Cyril Neveu at the Sardegna Rally Race increase the interest for the world event of Bike Village, with this “vintage spirit”, so racing. It’s enough if you think that in this world event, you will “only” have 20 Dakar’s victories represented. For sure, the Rally will put a lot of attention on Sardegna for a generation of Rallies fans. From May, 28th to June, 1st, for an adventure without equivalent. 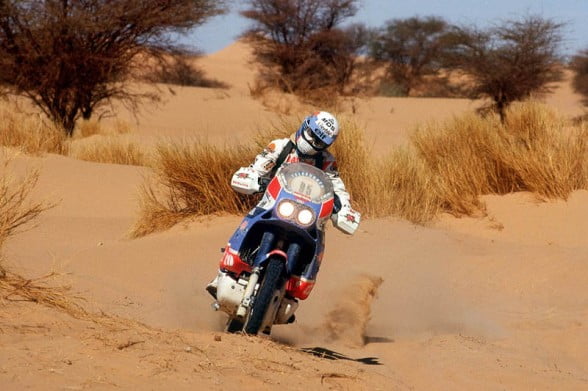 Just another news : Cyril Despres will stay in Sardegna at the end of the race to participate also at the Cavalcata del Sole.